Influencer Q&A with Mountain Dew: “Twitter has already become invaluable to us”

Mountain Dew (@mtn_dew) recently gave its fans a blast from their tweeting past. For its Mtn Dew Baja Blast launch, the brand and its agency VaynerMedia (@VaynerMedia) built a Twitter campaign around thousands of consumer Tweets – some from as far back as three years.

@malhenny: We love Twitter because it allows us to have a 1:1 relationship with members of DEW Nation. We have these really passionate, loyal fans. So we always want to interact with them as authentically as possible.

On Twitter, we can participate in conversations and really surprise and delight followers in unique ways. It’s also a great testing ground for us. We pride ourselves in listening to our fans and innovation. Twitter has become the most timely tool we have to accomplish both of these goals.

@TwitterAds: What have been some powerful moments for your brand on Twitter?

@malhenny: It’s been a time of huge learning for us on Twitter recently. Dale Earnhardt Jr. (@DaleJr), who is a key spokesman for our brand, joined Twitter this year so we have been interacting with him and even had him do a surprise takeover of our handle.

We’ve also whitelisted and amplified Tweets from our athletes and talent during big brand moments, like the launch of Mtn Dew Baja Blast, Dew Tour and Dale winning a televised race. That’s a key benefit of Twitter: it helps us extend our reach and message through the massive followings of our spokespeople.

Tying our big campaigns to TV moments also drives strong engagement and huge attention for us, so we’ve experimented with TV ad targeting around Dew Tour:

@TwitterAds: Tell us more about how you’ve been tying Twitter in with your TV marketing.

@malhenny: Last year, we started to experiment with using Vine on billboards and TV. So you might be watching a game on television brought to you by Mountain Dew, and instead of just featuring our static logo, we’ve created five seconds of screen time using real Vines. We repeated this for Dew Tour Ocean City a couple of weeks ago, as our response was so positive last year. We love Vine. There are so many emerging influencers we’d love to collaborate with, and it’s a territory for very rich, but quick, storytelling.

@malhenny: This campaign is really something that could only happen on Twitter. We launched a flavor called Mtn Dew Baja Blast with our partners at Taco Bell 10 years ago, and since then it’s only been available there as a fountain drink. But consumers have been asking us to put in bottles and cans, in-store, ever since. Finally, this summer, we acted on their requests with this announcement on Twitter.

With our agency partners at VaynerMedia, we helped launch the product by going back and retargeting Tweets – some from as far back as three years ago – that people had sent clamoring for Mtn Dew Baja Blast. We responded with personalized Tweets, engaging around 500 fans in one-to-one interactions, and promoted some of them to get the message out to the broadest audience possible. We also featured fan Tweets as a part of the creative for our Mtn Dew Baja Blast Twitter campaign, demonstrating that we really do value the opinions of Dew Nation. We wanted them to know that they were an important part of our decision to bottle this flavor for the summer, and there was no better way to do this than to make them central to our campaign.

The reactions were priceless:

@TwitterAds: Tell us about the creative you developed for your Tweets.

@malhenny: We did significant research and due diligence about the people that we reached out to for the campaign. Vayner helped us develop unique, individually-crafted responses. There were never any boilerplate messages. Each Tweet was personal and unique to the context of that fan and how they had asked for the Mtn Dew Baja Blast flavor in their Tweets.

We also created a mobile game called Baja or Bust and drove downloads of the app through Tweets. It was a really powerful, unique integration point where Twitter helped drive another part of the 360-degree campaign. The game is already one of the top performing branded mobile games we’ve ever created.

We also tested the new Twitter Video Card that is currently in beta to help us distribute a two-minute video called “Baja Breakout” with our all-star athletes Dale Earnhardt Jr., Danny Davis and Paul Rodriguez. 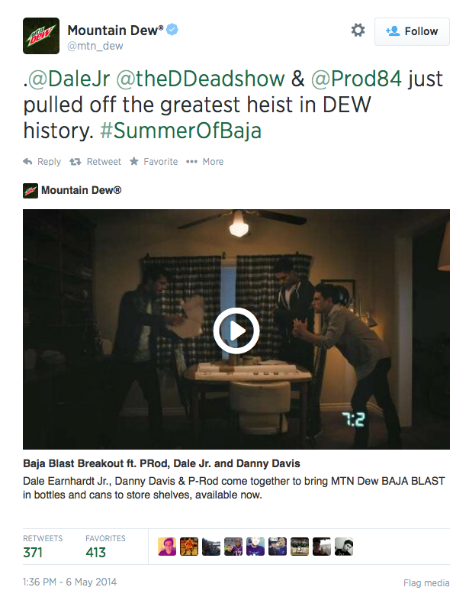 @TwitterAds: What have been the results of the campaign?

@malhenny: I believe the launch will go down as one of the most successful limited-time offers that we’ve ever had for the Mountain Dew brand. Activating on Twitter has been phenomenal at getting the word out and driving engagement.

It’s by far our most retweeted campaign of the year, and 83% of people who we reached out to for the “Blast Response” campaign responded to us. As you can see, engagement rates and earned media have been incredible. The announcement of Baja on Twitter also organically sparked national trends the day we launched.

And we know the great buzz and energy in the marketplace that starts in social with sharability ultimately helps drive sales.

@TwitterAds: What is your top tip for success on Twitter?

@malhenny: It’s really about listening to our fans, analyzing and instigating cultural trends and identifying consumer insights that can inform better, smarter campaigns. And above all, we want to add real value — whether it’s making major announcements on Twitter or surprising fans by featuring them in our campaigns. That’s where all of these creative concepts start for us. We saw more than 30,000 Tweets about Baja Blast over the years and that was the springboard for everything in the launch campaign. I think as long as you ground campaigns in something that’s native and organic to the platform, the idea has strong potential.

@malhenny: We’re leaning in more and more every day with all the new products and features. We plan to do more with TV targeting and we have been testing #AmazonCart. That’s a big unlock for eCommerce companies which we’re obviously not. But it’s been very interesting to test that and see where it could go — we see a lot of fan excitement around the capability.

We are definitely waiting with bated breath around all the new products because Twitter has already become invaluable for us. It’s the language of millennials. It’s mobile and where our fans are. It’s where news happens now. So there’s infinite value and potential in where Twitter can take our brand.