Influencer Q&A with PUMA: Using Flock to Unlock to connect with consumers

Last month, @PUMA’s #ForeverFaster brand campaign hit the ground running with help from Flock to Unlock, a marketing tool from Twitter that enables brands to incentivize followers to spread their message. Two days before the campaign launched, the global sports brand and its athlete partners created buzz by using a custom Twitter Card to present an offer: @PUMA would reveal video content featuring the athletes early if a lot of users Tweeted about it.

The result? A major boost in brand engagement and awareness. PUMA’s Flock to Unlock strategy drove 50 million impressions, and thousands Tweeted to unlock the content. Brand mentions increased by tenfold.

@TwitterAds: Why did @PUMA decide to try Flock to Unlock?

@remic: When we began working on the #ForeverFaster campaign months ago, we carefully reviewed a number of platform partners. We knew we needed a platform that would properly communicate our message, and found that Twitter was the clear choice. Twitter is all about fast conversation and fast engagement. It also has wide global reach, which is important for us as a global brand.

As part of the campaign launch, we decided to try the Flock to Unlock strategy in early August to engage our target audience and reward them with exciting content. 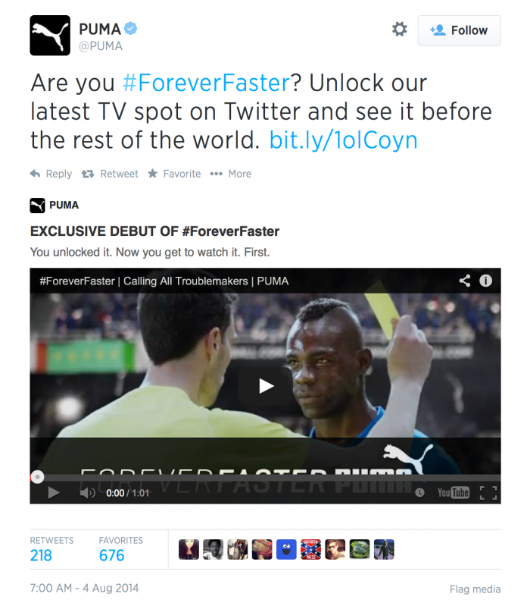 @TwitterAds: Tell us about your target audience.

@remic: Our digital marketing is targeted not only toward consumers who are constantly testing the limits, but to those whom they inspire as well. They have a strong presence on these platforms and they use them to communicate. This is why we chose Twitter.

@TwitterAds: Compelling content is key to a successful Flock to Unlock campaign. How did you determine what content to use?

@remic: We had just filmed a series of TV commercials featuring several inspiring athletes – Sergio Aguero (@aguerosergiokun), Usain Bolt (@UsainBolt), Mario Balotelli (@FinallyMario), James Charles (@JCharles25), Jadeveon Clowney (@Clownejd), Cordarrelle Patterson (@ceeflashpee84) and Lexi Thompson (@Lexi). We knew that users would be eager to see this content, and so we used Flock to Unlock to release it 48 hours before the commercials aired. Vines were the perfect medium to provide teasers, and partnering with these athletes on Twitter enabled us to reach more than 19 million followers globally.

@TwitterAds: What was the reaction to the campaign?

@remic: It was amazing on both the consumer side and the industry side. On the consumer side, people engaged in a very natural way and the overall sentiment was very positive. Flock to Unlock worked well with our target audience. They’re all about instant gratification and they’re willing to proactively Tweet on our behalf to be rewarded with great content.

@TwitterAds: What advice would you give brands new to Twitter?

@remic: One thing I’ve learned over the years is you have to be extremely patient. It’s like raising a child; it takes time. You don’t go from zero to walking and talking in a week. Try something over 12-18 months and be willing to adjust your strategy on a regular basis throughout.

Also, don’t hesitate to let influencers speak on your behalf. This can often be more powerful than communicating directly.