Influencer Q&A with Wendy's: The story behind #PretzelLoveSongs

Now fans of @Wendys Pretzel Bacon Cheeseburger can sing its praises — literally. Earlier this summer, @Wendys built buzz about the return of the popular limited-time menu item by transforming users’ Tweets about it into love songs performed by R&B group @BoyzIIMen.

Twitter users ate it up. We talked to Brandon Rhoten (@brhoten), Vice President of Digital/Social at Wendy’s, to learn more about the campaign and how the brand uses Twitter to connect with customers.

@TwitterAds: How did you come up with the idea for #PretzelLoveSongs?

People are excited to share their love for this thing. That led us to say, how can we promote this product without being annoying?

@TwitterAds: Why do you think the campaign resonated with users?

@brhoten: First of all, it’s user-generated. It’s a natural outspring of what people are saying, and it’s authentic and interesting. It’s not the typical 30-second TV spot.

Second, the campaign features music popular in the 1990s. When you use a style of music that reminds people of what they grew up with, it grabs them. Normally these songs are about long lost love, or breaking up with a girlfriend, and here it’s about a cheeseburger. It draws people in and makes them smile. 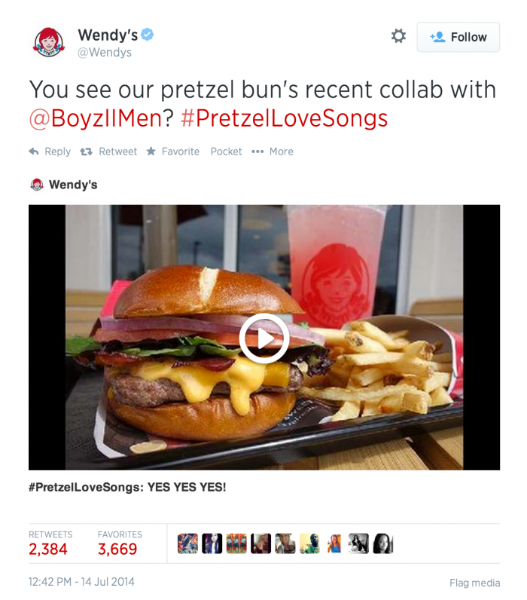 @TwitterAds: Put the campaign’s success in context. How big was this for you?

@brhoten: We have 6,500 locations and billions of dollars of business. If a campaign isn’t reaching tens of millions, it’s not going to be successful. We also need to see sentiment change and unique reach beyond television. This Twitter campaign has done those things for us.

Another clear sign of success for this campaign is the external recognition. The campaign has been featured in Spin, Forbes and AdWeek.

@TwitterAds: Why was Twitter an effective platform for this campaign?

@brhoten: On Twitter, people are willing to consume our content because it doesn’t feel like they’re being served an ad. This campaign also relies heavily on people communicating with us. On Twitter, we’re not talking at them, we’re talking with them. 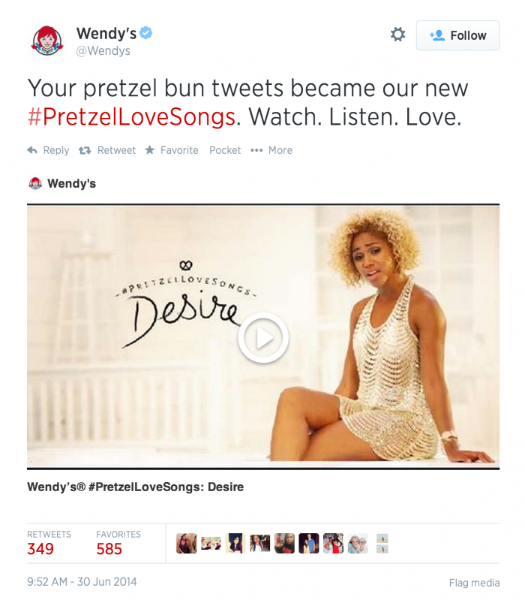 @TwitterAds: How has your social media strategy evolved over the last year?

@brhoten: We used to view Twitter as a reach game, but now, we’ve moved Twitter into a “deeper brand connection” bucket. While we can reach millions of people on Twitter, we’re finding that the value is in the depth of the connection that Twitter provides and the two-way conversation that it offers. Twitter allows us to understand consumer sentiment, and to see direct results very quickly.

@TwitterAds: How would you describe the tone or brand personality that Wendy’s is trying to achieve? How does Twitter help you do that?

@brhoten: When it comes to quick service dining, we know we’re not the biggest guy on the block, so we see ourselves as this challenger who is optimistic and fun-loving. On Twitter, we joke a lot, we go for clever one-liners. Twitter enables us to have quick banter conversations with our audience. When someone says they love us, we can respond.

@TwitterAds: Does the restaurant industry need to approach marketing on Twitter differently than other industries? If so, how?

@brhoten: Restaurants do have to approach it differently. We’re not a considered purchase, like a car or clothing. You make a decision to come to Wendy’s in a minute, and you show up in five minutes. Our golden time is an hour before lunch. At 10:30, 11am, you’re thinking about what you want to eat at noon. Being where people make that decision is important. We want to have messaging in that space.

@TwitterAds: Why is mobile marketing on Twitter so important for Wendy’s?

@brhoten: The majority of our digital marketing now does run on mobile. Mobile matters significantly more to us than desktop. When people are making quick decisions, they’re not carrying a laptop around with them.

@brhoten: I pay attention to Twitter to understand the trends. What are people talking about, and how are they talking about it?

@TwitterAds: Thanks Brandon. We look forward to seeing more creative campaigns from @Wendys in the future!

Know an #Influencer we should interview? Submit suggestions to @TwitterAds.