Earlier this year, we announced a new way for selected advertisers to drive mobile app installs and engagements on Twitter. After seeing strong results in beta, we’re excited to offer mobile app promotion to all advertisers globally, starting today.

People turn to Twitter to connect with their interests, and discover new ones. During the mobile app promotion beta, our clients have been able to reach Twitter’s highly engaged audience to drive a large volume of cost-effective downloads. For example, @playdots promoted TwoDots, a spinoff of their highly addictive mobile game.

We’ve reached tremendous scale on mobile app promotion. TwoDots has driven over a million app installs in a short period of time, and Twitter has become an essential user acquisition channel for us!

During the beta, we were able to quickly and effectively reach our growth goals via Twitter for 30% below the originally targeted cost.

EA has been thrilled to have participated in the beta. We were able to drive a significant number of installs for our suite of casual and core games including the Sims FreePlay, Real Racing 3, and Heroes of Dragon Age at or below single digit cost-per-installs. Our partnership with Twitter has allowed us to connect engaged high value players with our games.

Mobile app promotion leverages Twitter’s existing powerful targeting capabilities, including interest, keyword, TV targeting and tailored audiences to help you reach your desired audience. You can also layer on gender, geo, language and mobile platform targeting to pinpoint the users who are best suited for your app.

Once you’ve set your targeting, we offer a number of ways to customize the creative aspects of your ad using Promoted Tweets and App Cards, including:

In addition, App Cards on iOS will also include install notifications, a prompt that occurs on Twitter once your app is fully downloaded. The notification is designed to drive activation of your app when user intent is highest. 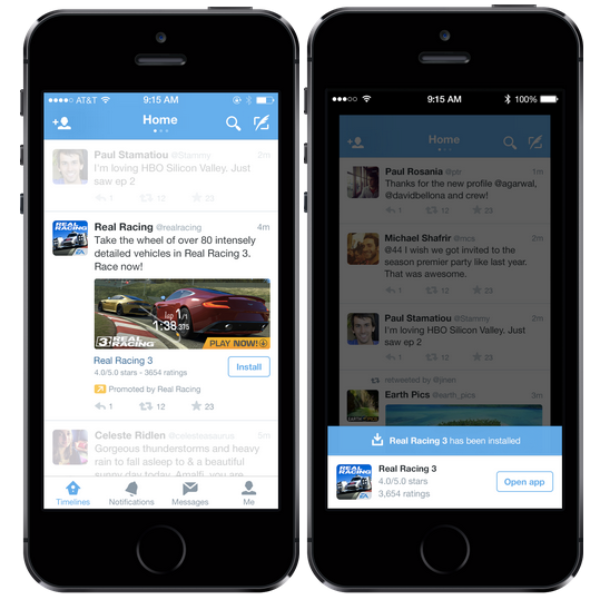 On the left: Promoted Tweet with App Card On the right: Install notification

Once your ads are running, we provide conversion tracking for mobile apps, which allows you to measure the full conversion impact of your campaigns, including initial installs and in-app conversion events. We have partnered with leading companies in mobile measurement to help you see how engagements and impressions on Twitter drive your app conversions. These partners include Adjust, AD-X, AppsFlyer, Fiksu, Grab, Hasoffers and Kochava. 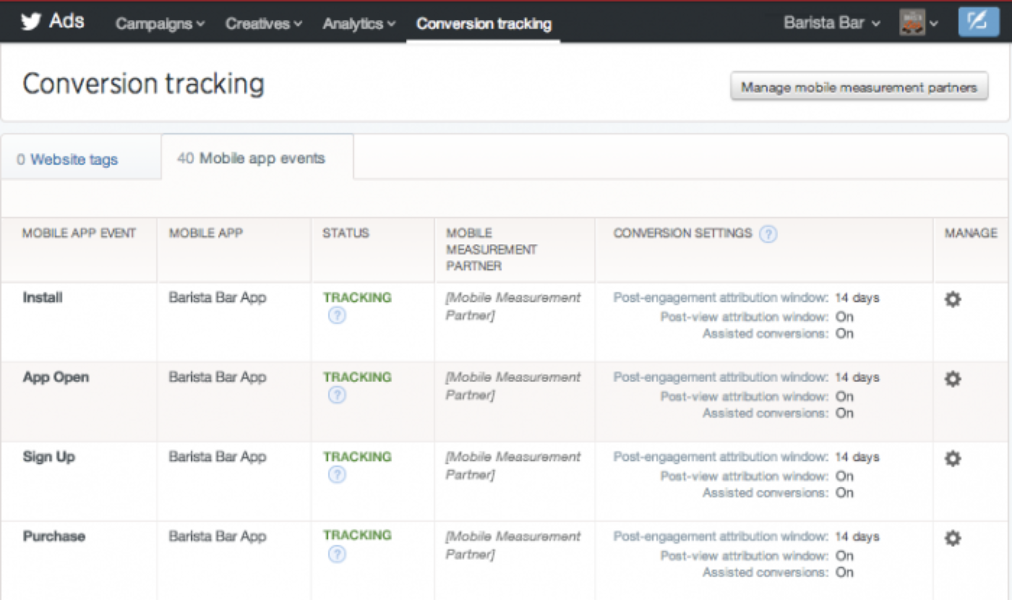 To ensure the highest possible return on investment, we’re offering a new pricing and prediction structure for mobile app promotion, based on a cost-per-app-click (CPAC) model. You will only be charged when a user clicks to go to the App Store or Google Play from your ad, or when they open your app directly from Twitter.

We’re excited for you to take advantage of this product suite to drive app installs and engagements with new and existing customers on Twitter. You can set up and run mobile app promotion campaigns directly from ads.twitter.com, or through our Ads API partners, which specialize in managing mobile performance advertising campaigns at scale. To get started, contact your account team or sign up for an account at ads.twitter.com. You can also visit our help center to learn more about creating a mobile app promotion campaign.