Join the roar of the #NBAPlayoffs crowd

Today, the best basketball players in the world will begin the quest to lead their teams to an @NBA Championship when the #NBAPlayoffs tip off. While they battle for supremacy, you can follow all of the action on and off the court in real time on Twitter.

The best way to stay connected to the playoffs is to follow @NBA for highlights, score updates, analysis and behind-the-scenes photos and videos. Worried about missing a top play, such as an alley-oop from @CP3 to @blakegriffin32? Look out for #NBARapidReplay video highlight Tweets throughout the post-season.

Follow @NBA for highlights and exclusive #NBAPlayoffs photos and video.

No matter who you’re rooting for, all 16 playoff teams are on Twitter.

In addition, you’ll want to follow @NBAonTNT, @ESPNNBA and @NBATV for expert analysis, guest tweeters, score updates and more. This list of ESPN broadcasters and writers and this list of TNT and NBA TV media guarantee you don’t miss anything happening on or off the court.

Will the defending champion @Heat win their third consecutive title in 2014? If it’s up to the crowd on Twitter this season, Miami will defeat the @HoustonRockets for a three-peat. Based on Twitter mentions since the season began October 29, the bracket below shows which #NBAPlayoffs team would win it all: 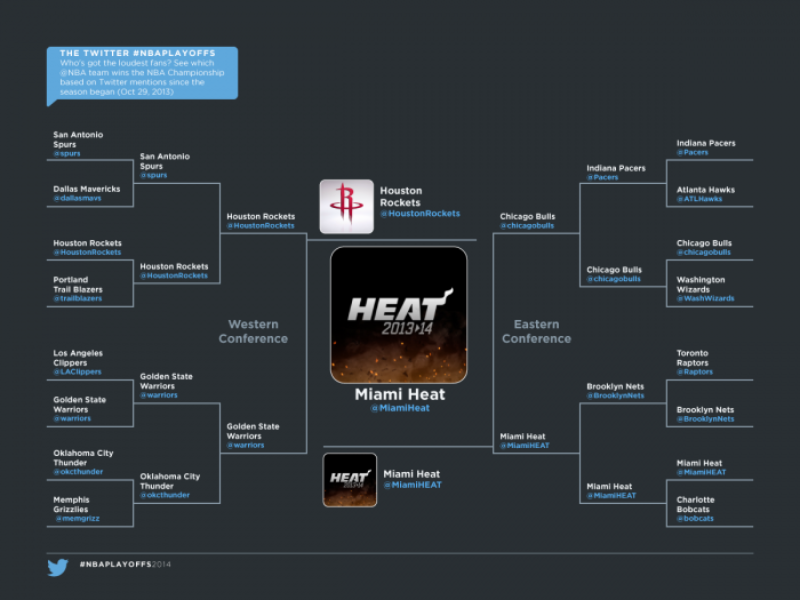 If you don’t like how the Twitter #NBAPlayoffs played out, dive into the conversation, cheer on your favorite @NBA teams and Tweet to @TwitterSports who you think will be the last team standing.