#MarchMadness: How #Sweet16 it is

After a thrilling first weekend of NCAA men’s college basketball games that saw awesome plays, overtimes, upsets, and lots more, #MarchMadness is now down to the #Sweet16.

There’s no better place to keep up with the non-stop action than on Twitter. Fans have had a front row seat for all of the #MarchMadness moments on and off the court. Here’s a selection of Tweets from the first three rounds:

Did a full slate of games during the week lead you to, er, come down with something? @MarchMadness asked fans to tweet them with #OutSick to get a prescription from @TurnerSportsEJ:

As expected, many college hoops fans seemed to be under the weather:

Throughout the tournament, fans have cheered for their favorite teams on Twitter. Here’s a bracket that shows which #Sweet16 teams would advance and win each of the remaining games based on Twitter mentions since #SelectionSunday (March 16-23): 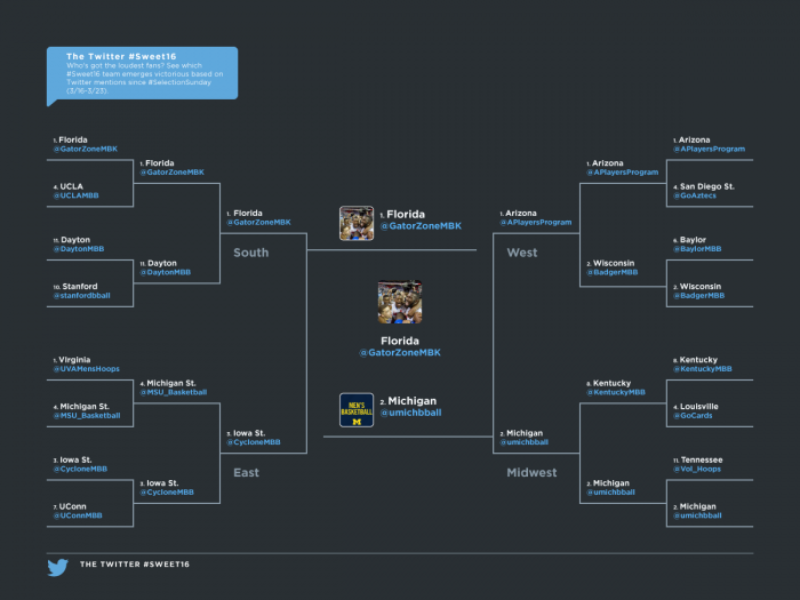 And if you don’t like how the Twitter #Sweet16 played out, jump into the conversation by cheering on your favorite team and by using #MarchMadness. Next week, when we’re down to the #FinalFour, we’ll post here again about which team will “win”, based on Twitter activity.