By
Monday, 19 May 2014
Link copied successfully

First Lady Michelle Obama (@FLOTUS) implemented all the appropriate best practices to propel a Twitter message, #BringBackOurGirls, extending the conversation to new audiences and drawing greater attention to the plight of 200+ kidnapped teenage girls in Nigeria.

Mrs. Obama tweeted on May 7, three weeks after the kidnapping, but as the cause tagged #BringBackOurGirls was gaining global traction. The Tweet was signed “mo,” signaling that she wrote it, with a photo and the hashtag. This is key: our research about verified users in government shows that Tweets with photos and hashtags draw the most Retweets, 62% more than normal for photos, 30% for hashtags.

The Tweet was pinned on her Twitter timeline, taking advantage of the new profile features, and was retweeted by @WhiteHouse, which has more reach with 4 million more followers than the @FLOTUS account.

The final key tactic she used was to embed her Tweet in a post on the White House website. Embedding a Tweet on a website can amplify your message significantly to reach even more people who may not be on Twitter or even familiar with it. Embedding brings a whole new level of traffic and awareness to the Tweet and the cause for which you’ve shared your voice. In the headlines feature of the Tweet, you can see the other 27 websites and new publications that embedded it. 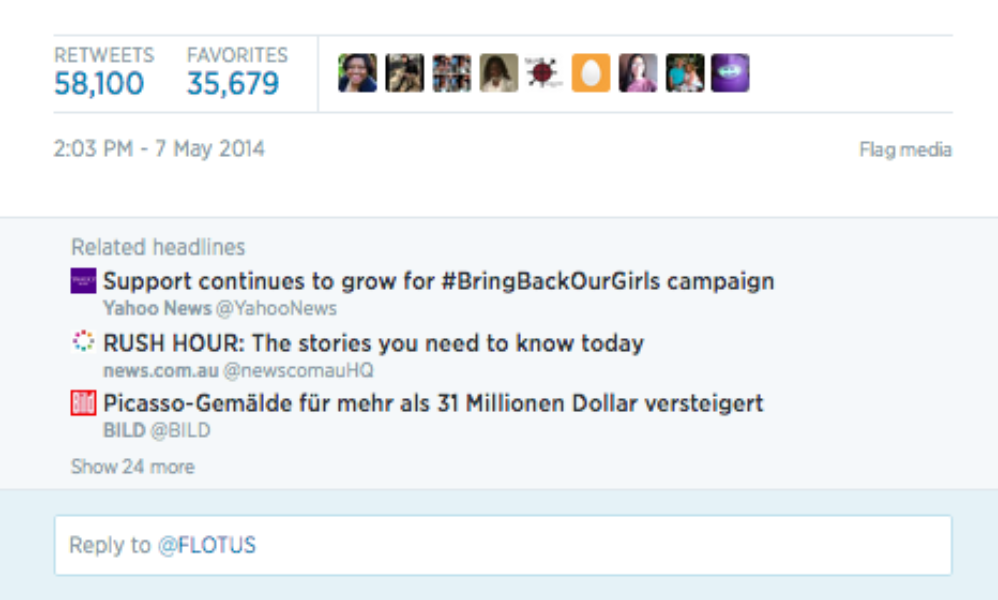 The activity marked Mrs. Obama’s biggest day of follower growth since her first day on Twitter. With 58,000 Retweets, the message gained about 6 times more Retweets than her next most retweeted Tweet. The Tweet even made its way into print, as it was featured on the cover of the next day’s New York Post:

First Lady Obama was not the only famous person to tweet #BringBackOurGirls. A host of other influencers have also spread the message to their millions of followers, including celebrities (Kim Kardashian and Dwayne Johnson), journalists (Katie Couric), athletes (Nigerian footballer John Obi Mikel), politicians (from the US to Venezuela), activists (Malala Yousafzai) and religious leaders (Pope Francis). There have been over 3.4 million mentions of the hashtag.