When they visit the @Spurs tonight, @KingJames and the @MiamiHeat will begin their quest for a third consecutive @NBA championship in an epic rematch from last season.

While the two teams battle to add to their already-impressive legacies, hoops fans can follow all of the NBA Finals action on and off the court in real time on Twitter. Join the conversation with the #NBAFinals hashtag and follow the @NBA for highlights, game updates, fan polls, analysis and behind-the-scenes photos and videos.

Heat fans can stay close to the action on the court and inside the locker room by following @MiamiHeat and using #LetsGoHeat, #HEATNation and #HEATFinals. Fans are also encouraged to share Tweets with pictures showing off their #WhiteHotHEATStyle.

@MiamiHeat players, including @KingJames and @ShaneBattier, can be found here.

Meanwhile, San Antonio fans should follow @Spurs for inside access to the team and dive into the hoops conversation with #GoSpursGo and #ESpurs (the team’s pregame show). Want to show off your Spurs colors? Tweet pictures of yourself wearing black or Spurs gear using #GoSpursGo for a chance to win a pair of tickets to each game.

And if you happen to miss a key play from the #NBAFinals, have no fear. Twitter Amplify and the NBA have teamed up to provide fans the very best #NBARapidReplay highlights from the NBA Finals, presented by American Express, Champs, and State Farm.

Here’s an #NBARapidReplay featuring @KingJames from the Eastern Conference Finals:

The @Spurs were part of many key plays in their Western Conference Finals victory over the @OKCThunder, including this great @manuginobili pass to @theborisdiaw:

You’ll also want to follow @ESPNNBA, @NBATV and @NBAonTNT for expert analysis, guest tweeters, score updates and more. This list of ESPN broadcasters and writers, and this list of TNT and NBA TV media, will ensure you don’t miss any of the excitement on or off the court.

In addition, @ESPN has teamed up with renowned sports animator Richard Swarbrick to develop a Vine campaign celebrating the 2014 NBA Conference Finals and #NBAFinals. Check out this Vine video, featuring @manuginobili:

Will the defending champions win their third consecutive title in 2014? Or will the @Spurs win their fifth championship since 1999? If it were up to fans on Twitter, the Heat may be tough to dethrone: this graphic shows that the @MiamiHeat were discussed the most on Twitter since the NBA Playoffs began on April 19, 2014. 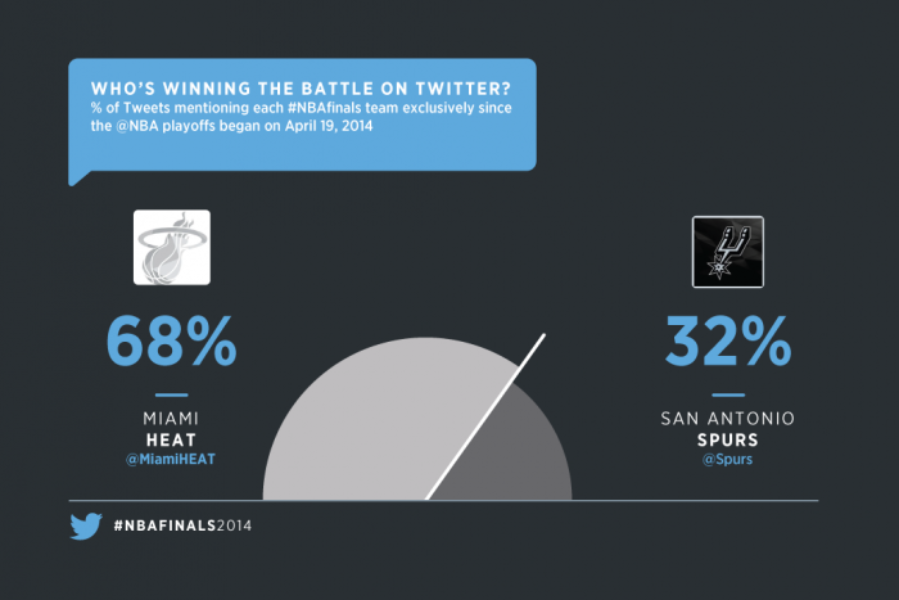 If you can’t wait to tweet along with the NBA finals, you’re not alone. Our new research finds that 61% of sports fans on Twitter tweet at least once a day, and 78% check in for news daily. Read more on this research here and remember to follow @TwitterSports for the latest sports Tweets, data and best practices from around the world.