By
Tuesday, 20 May 2014
Link copied successfully

The place to go for live conversation around the NFL Draft from May 8-10 was Twitter. A wide array of integrations with ESPN and NFL Network, including voting cards and Amplify and Vine videos, made the 2014 NFL Draft the most-viewed and most-tweeted about ever.

Recognizing Twitter’s prowess as a medium for real-time sports talk, the NFL worked to make an all-inclusive experience on and off air fit together to achieve a successful event. According to Nielsen Social (@NielsenSocial), 11.7 million people saw Tweets about the first round of the 2014 NFL Draft, which aired on ESPN and NFL Network on May 8. Some 1.6 million authors (a 160% increase from last year) sent 7.17 million Tweets (a 349% increase) about the airing — all of which generated a total of 697.5 million Twitter TV impressions for the night.

The NFL was the first sports organization to use a Twitter custom voting card, powered by Poptip. The NFL paired the voting card with an on-air call to action and showed the results in real time during the program. As one example, there were more than 220,000 votes on this card:

The NFL continued its partnership with Twitter Amplify to produce videos, and tweeted near-real-time video of key selections, interviews and reactions. Two minutes after Johnny Manziel (@jmanziel2) was picked, @nfl had a video of his selection.

Likewise, the NFL was quick to tweet a video of Michael Sam (@MichaelSamNFL) being selected.

Posing in the Vine 360 Booth

A Vine 360 Booth was placed on the red carpet with easy access for the players (and many of their moms). A six-second clip was enough time to capture @sammywatkins giving his mom a hug and a kiss on the eve of Mother’s Day weekend.

Vine offered the NFL a creative way to give fans a glimpse of the athletes behind the scenes.

Twitter was also a visible part of the NFL’s on-air strategy. Both broadcasting networks, NFL Network and ESPN, had consistent hashtag placement: #NFLDraft for the former, and the latter had team-specific hashtags for each pick, such as #HOUPick for the Houston Texans’ top pick.

It wasn’t only hashtags, either. Tweets were heavily integrated into programming in the lower third and tickers to show reactions from the draftees, other players and fans. 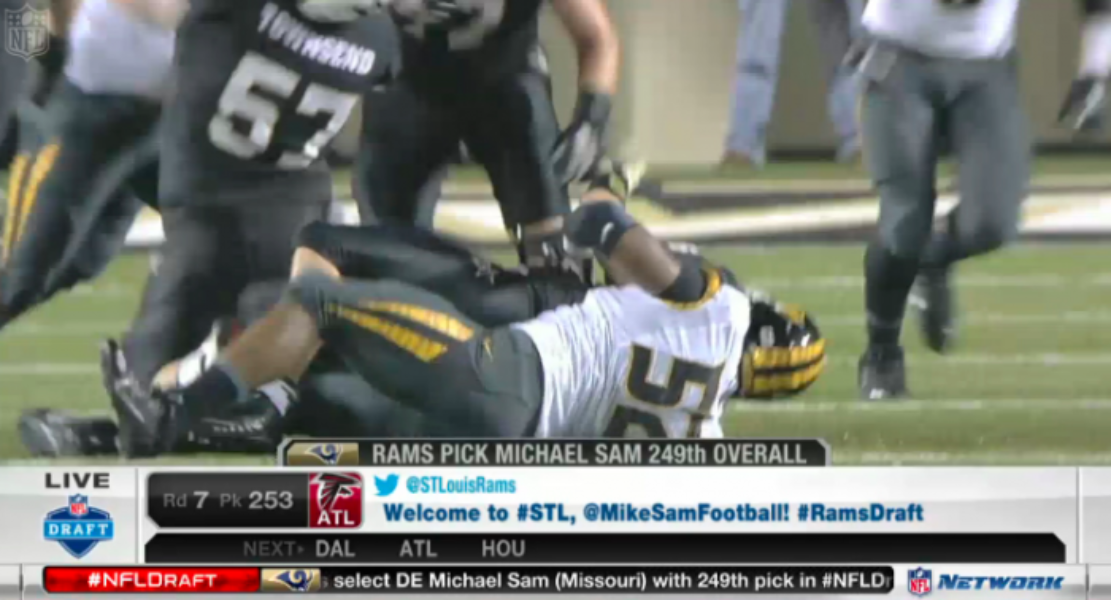 Image used with permission from @nflnetwork

Tweeting behind the scenes and answering questions

Teams and players brought fans behind the scenes with Twitter. They showed what it was like to be in the war room choosing players or at a draft party waiting to hear the picks.

Players thanked their college team, NFL teams interacted with fans and draftees tweeted back and forth with the stars of their new teams.

On May 6, two days before the draft, NFL Commissioner Roger Goodell (@nflcommish) chatted with fans when he took over @nfl for a Twitter Q&A. There were more than 16,000 mentions of the hashtag #AskCommish.

Journalists also used Twitter to tell the story of the NFL Draft. Sports Illustrated, CBS Sports, Bleacher Report, Yahoo!, ESPN, Grantland, Sports Business Journal and FOX Sports were among the organizations that used Tweets or Twitter data in their coverage. When Sam became the first openly gay player to be drafted by an NFL team, his fellow athletes along with celebrities and fans took to Twitter to congratulate him and mark the momentous milestone. Their posts, as well as Sam’s initial Tweet upon being selected, were likewise embedded in numerous articles online.

You can see from looking at the related headlines feature on his Tweet exactly how many publications have embedded so far.

NFL’s all-in effort led to superlative results well beyond the opening round. According to the Nielsen Twitter TV Ratings (NTTR) numbers from @NielsenSocial, day two of the NFL Draft on May 9 broadcast on ESPN and NFL Network drew 1.2 million Tweets (35% more than last year) from 435,000 authors (20% more than last year) seen by 8.6 million people. There were 1.4 million Tweets (a 123% increase from last year) from 541,000 authors (a 79% increase from last year) seen by 10.1 million people on the final day.

Not surprisingly, the draft’s three prominent accounts — @NFL, @NFLNetwork and @ESPNNFL — all had sizable follower increases each of the three days.