Today, Ipsos MediaCT released their new whitepaper “The Twitter Effect: Understanding Twitter’s Role in TV Behaviors,” which details how Twitter users “exert more influence upon a spectrum on behaviors related to viewing TV shows than non-users.” The findings show that Twitter users are TV influencers across every measure analyzed: what to watch, how to watch and where to watch.

Twitter users are heavy TV viewers
People on Twitter love TV content and are less likely to be cord-cutters or cord-nevers: 93% have a cable, satellite or fiber optic subscription, versus 86% of non-users. In a typical week, Twitter users watch just as much (if not more) live TV than non-users, and they are also more open to new viewing behaviors, formats and media. Among all TV viewers, watching live actually remains the most common way to view content (69% of Twitter users, 59% of non-users), but those on Twitter are significantly more likely than non-users to also watch content on non-traditional mediums, from online SVOD services (52% vs. 35%) to content freely available on the Internet (39% vs. 17%).

In addition, Twitter users are more likely to binge-watch TV, with 26% claiming to watch multiple episodes of the same show back-to-back within a short amount of time. This increases to one in three among daily Twitter users. In contrast, only about one in ten non-users do so (11%).

TV’s cool kids are on Twitter
The savviest, most passionate and engaged TV fans gather on Twitter to enjoy their favorite shows even more. Beyond making TV more fun, their Tweets help others discover what to watch on TV, generate valuable earned media impressions that drive people to take TV-related actions and can positively affect live and L+7 ratings. With social media playing a greater role in the TV viewing experience than ever before, Twitter’s cohort of influential TV viewers presents a valuable opportunity to fellow TV fanatics, brands and networks alike. 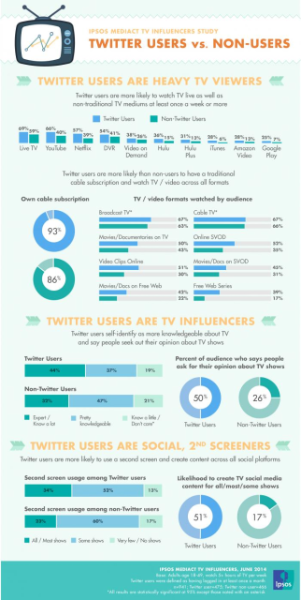