When they visit the @Royals tonight, the @SFGiants will begin their quest for a third @MLB World Series win in five seasons, while Kansas City will try to #TakeTheCrown for the first time since 1985. Let Twitter be your home for everything on and off the diamond during the seven-game series.

The best way to stay connected to the World Series is to follow @MLB for highlights, score updates, analysis and behind-the-scenes photos and videos. You’ll also want to jump into the conversation with the #WorldSeries hashtag, which is also prominently displayed along the dugouts in each stadium.

This year, fans can see all the key moments within their Twitter timelines. @MLB has partnered with Samsung to deliver the best in-game highlights from each game in real time.

A regional cover of this week’s Sports Illustrated (@SINow) features the @Royals:

The @Royals haven’t lost a game yet this postseason, and are trying to win their first championship in 29 years. Kansas City defeated the @Athletics in the #WildCard game, the @Angels in the #ALDS and swept the @Orioles in the #ALCS.

The Giants are asking fans to tweet photos wearing their Giants colors:

The @SFGiants have taken a similar path to the #WorldSeries, defeating the @Pirates in the #WildCard game, the @Nationals in the #ALDS and the @Cardinals 4-1 in the #NCLS. When Giants left fielder Travis Ishikawa hit a dramatic series-clinching walk-off home run last Thursday to win the #NCLS for his team, fans turned to Twitter:

This collection showcases Tweets from teams, players and celebrities building up to the Series:

Fans will also want to stay connected to news on and off the field with the official broadcast partner. Follow @FOXSports, @FOXSports1 and @MLBONFOX.

@FOXSports will offer fans game analysis on Twitter using the hashtag #JABO. FOX will also ask fans at the games in Kansas City and San Francisco to Tweet their @Vine highlights from the stadiums using the hashtag #SocialHighlight. The best content will be featured in a post game segment on @FOXSports1.

If the 2014 #WorldSeries winner was determined by #postseason chatter, Kansas City would win it: the @Royals Twitter handle has been mentioned more than @SFGiants handle on Twitter since the @MLB#Postseason began on Sept. 30th. 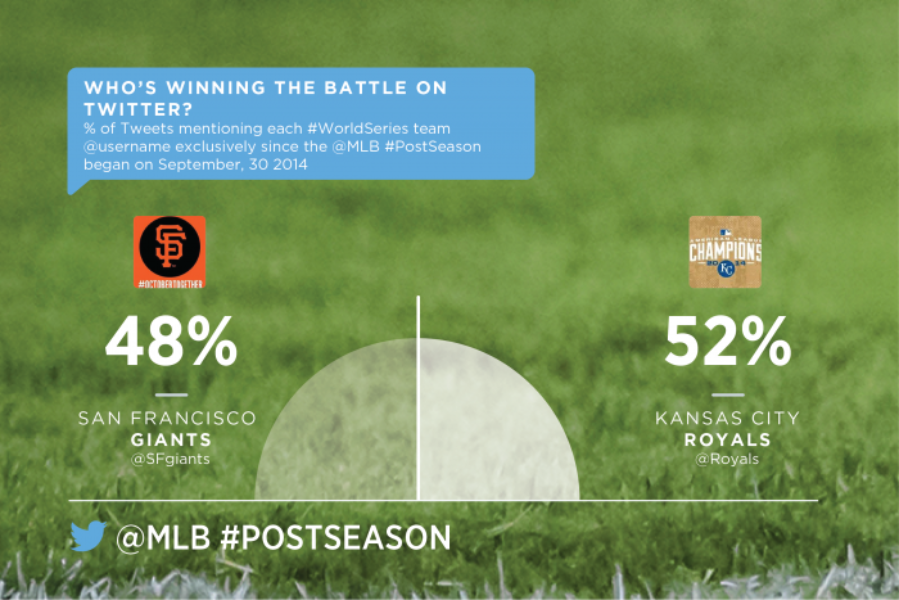 From the first pitch tonight by @Royals pitcher James Shields to the final moment for the victors, Twitter will keep you close to all of the 2014 @MLB#WorldSeries action.