Last week, we announced that football fans can experience the new #NFL and game timelines on Twitter. This week, we debut the first NFL on Twitter weekly recap of the season.

From the defending Super Bowl champion @Seahawks’ convincing victory over the @Packers last Thursday to last night’s double-header on @ESPNMondayNight, the @NFL season began with plenty of storylines — all of which played out on Twitter.

The #NFL had plenty of big-time performances by players and teams this week, plus some off-the-field news, that drove the Twitter conversation.

@DangeRussWilson led the @Seahawks to a big win on #Kickoff2014, while @AntonioBrown84 gained notoriety for a big receiving day on Sunday — and for kicking a punter in the chest on a return.

And when the @Ravens announced on Twitter yesterday that they terminated the contract of @RayRice27, NFL fans and media members immediately discussed the breaking news.

Here are the top five most-mentioned players (player name and/or player Twitter handle) on Twitter during week one of play (from Thursday, Sept. 4 through Monday, Sept. 8):

Click on this image below to explore this data visualization that features week one’s most mentioned players and teams (and related Tweets). We will update this data viz each week of the season on Tuesdays. 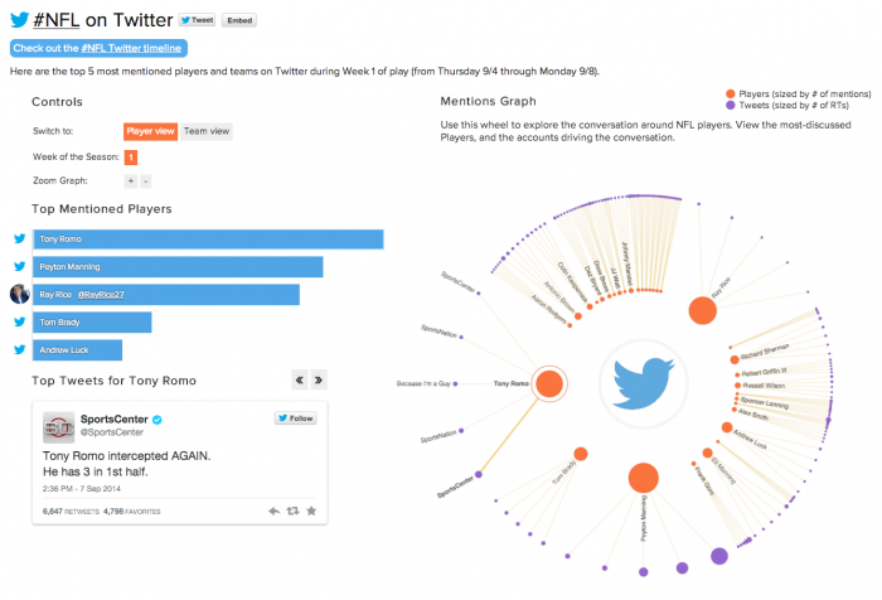 Week one saw a flurry of close games, upsets and big plays on the gridiron. Here are the top five most-Tweeted games during live telecasts by number of Tweets, as measured by Nielsen Social (@NielsenSocial):

Week 1: Tweets of the week

Even though following the #NFL action on Twitter ensures you won’t miss a single moment of the season, we put together this collection of Tweets from week one. Enjoy!

Remember to follow @TwitterSports and come back every Tuesday as we recap how the #NFL week played out on Twitter.