Week 10 of the #NFL saw the league pay tribute to branches of the military for Veterans Day, two more star quarterbacks put up record-breaking performances, while another key signal caller was lost to injury for the rest of the season. It also included a breakout #BeastMode performance, a key NFC showdown that ended in OT and this season’s last game in London. All of this week’s @NFL action on and off the field played out on Twitter.

The @AZCardinals improved to an NFL-best 8-1 after beating NFC West rival @StLouisRams 31-14. After Arizona lost starting QB Carson Palmer to a knee injury in the fourth quarter, backup QB Drew Stanton (@drewstanton) came in and found rookie WR John Brown (@RIPJWALK5) for a 48-yard diving TD (and even better celebration dance) for the winning score with under eight minutes left in the game.

On Monday, the team confirmed that Palmer tore his ACL and will be out for rest of the season.

@SNFonNBC featured a game that was almost over by halftime, as Aaron Rodgers (@AaronRodgers12) and the @Packers embarrassed the @ChicagoBears 55-14. Rodgers tied an NFL record with six TD passes in the first half, including two to Jordy Nelson (@JordyRNelson), and became the first QB in NFL history with 10 TDs and zero interceptions against an opponent in a season.

Even Wisconsin governor Scott Walker (@ScottWalker) couldn’t help but Tweet about the game.

The @Saints thought they had the game won at the end of regulation when Drew Brees (@DrewBrees) completed a hail mary to Jimmy Graham (@TheJimmyGraham). However, the play was nullified when Graham was called for offensive pass interference.

The rain in Seattle didn’t slow down the @Seahawks, as they beat the @Giants 38-17, thanks to MarShawn Lynch (@MoneyLynch) going #BeastMode with four TDs and 140 yards rushing.

In Detroit, the @Lions improved to 7-2 by beating the @miamidolphins 20-16 thanks to great defense, the return of star WR Calvin Johnson and solid play from QB Matt Safford (@Staff_9), who threw a game-winning TD to Theo Riddick (@Riddick6) with 29 seconds left in the game.

Despite a record-breaking past few weeks for Ben Roethlisberger (@_BigBen7) and the @Steelers, Pittsburgh struggled with turnovers and was upset by Mike Vick (@mikevick) and the @NYJets 20-13. Jets safety Jaiquawn Jarrett (@jaiquawnjarrett) had a huge day with two interceptions, 10 tackles and a sack.

In London, the @dallascowboys welcomed the return of quarterback Tony Romo from injury and beat the @Jaguars 31-17. Romo threw three TDs, including two to Dez Bryant (@DezBryant).

Five more TD passes from Peyton Manning, including two each to Julius Thomas (@Julius_Thomas) and Emmanuel Sanders (@ESanders_10), led to the @Broncos 41-17 win over the winless @RAIDERS:

And on Thursday Night Football, the @Browns took over first place in the AFC North after beating up on Andy Dalton (@AndyDalton14) and the @Bengals:

Here are the top five most-mentioned team accounts on Twitter during week 10 of play (Thursday, Nov. 6 through Monday, Nov. 10): 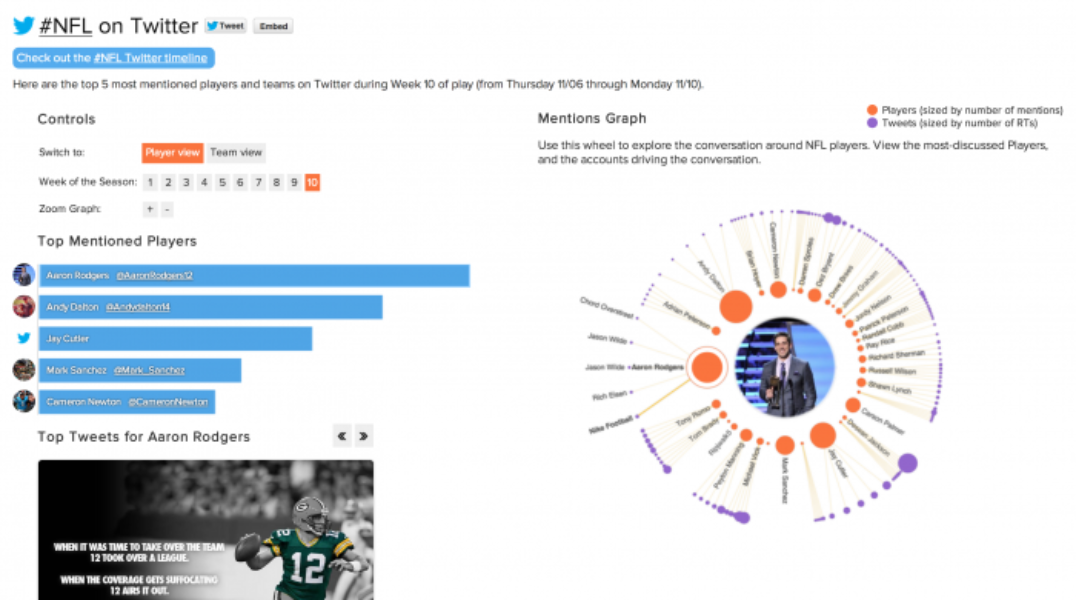 Miss a touchdown from week 10? @NFL has you covered:

And we put together this collection of Tweets from week 10. Enjoy!