The #NFL chatter on Twitter surrounding week 11 focused on the stellar play of the @Patriots and new featured back Jonas Gray, another big game for @AaronRodgers12 and the @Packers, the 9-1 @AZCardinals, the bruising ground effort by Le’Veon Bell, and @JJWatt’s dominating performance. All of this week’s @NFL action on and off the field played out on Twitter.

Two of the top teams in the AFC faced off on @SNFonNBC, but Tom Brady, running back Jonas Gray (@jgray_ND25) and the @Patriots were too much for the @Colts. Gray, who joined the team in week six and had zero TDs prior to Sunday night, bursted onto the scene with 199 rushing yards and a franchise-record four TDs in the Pats’ 42-20 victory, their sixth win in a row.

The @Colts also lost running back Ahmad Bradshaw (@AhmadBradshaw) in the defeat to a broken ankle.

Aaron Rodgers (@AaronRodgers12) and the @Packers continue to roll through opponents, especially at home. Rodgers threw for another three TDs in Green Bay’s dominating 53-20 win over the @Eagles.

Behind new starting QB Drew Stanton (@DrewStanton) and WR Michael Floyd (@MichaelMFloyd), the @AZCardinals moved to a NFL-best 9-1 record after beating the @Lions 14-6.

In Kansas City, running back Jamaal Charles (@JCharles25) rushed for 159 yards and two TDs in the @KCChiefs 24-20 win over the defending champion @Seahawks. KC is now tied for first place in the AFC West.

In Cleveland, @JJWatt continued his dominating season in the @HoustonTexans 23-7 win over the @Browns. Watt helped new Houston starting QB Ryan Mallett (@Ryan_mallett_15) earn a win in his first start with a sack, fumble recovery, three tackles for loss and one amazing TD catch.

Last night on @ESPNMondayNight, the @Steelers came back to beat the @TennesseeTitans 27-24 behind 204 rushing yards by Pittsburgh running back Le’Veon Bell (@L_Bell26). Fans, including former Steelers running back Jerome Bettis (@JeromeBettis36) and singer Jordin Sparks (@JordinSparks), turned to Twitter to praise Bell:

The biggest upset of the week came in St. Louis, as the @StLouisRams shocked the @Broncos 22-7. The Rams’ defense held Denver to their lowest point total since Peyton Manning joined the team:

The @Saints lost for the second consecutive week at home, as the @Bengals rebounded from a poor performance in week 10 to beat New Orleans 27-10. Bengals quarterback Andy Dalton (@AndyDalton14) threw for three touchdowns, including one to star WR A.J. Green (@ajgreen_18).

Due to a broken thumb, the Saints will be without WR Brandin Cooks (@brandincooks) for at least a month.

Thanks to a stingy defense that forced Eli Manning into five interceptions and a strong rushing attack led by Frank Gore, the @49ers beat the @Giants 16-10. 49ers Linebacker Chris Borland had another huge impact in the win.

Other notable moments from week 11 include a huge day for Mike Evans (@MikeEvans13_) in the @TBBuccaneers win over the @Redskins, the @Chargers barely escaping an upset bid by the @RAIDERS and the @Atlanta_Falcons moving into first place in the NFC South despite a 4-6 record:

Here are the top five most-mentioned team accounts on Twitter during week 11 of play (Thursday, Nov. 13 through Monday, Nov. 17):

Click on the image below to explore this data visualization that features week 11’s most-mentioned players and teams (and related Tweets). We will update this data viz each week of the season on Tuesdays. 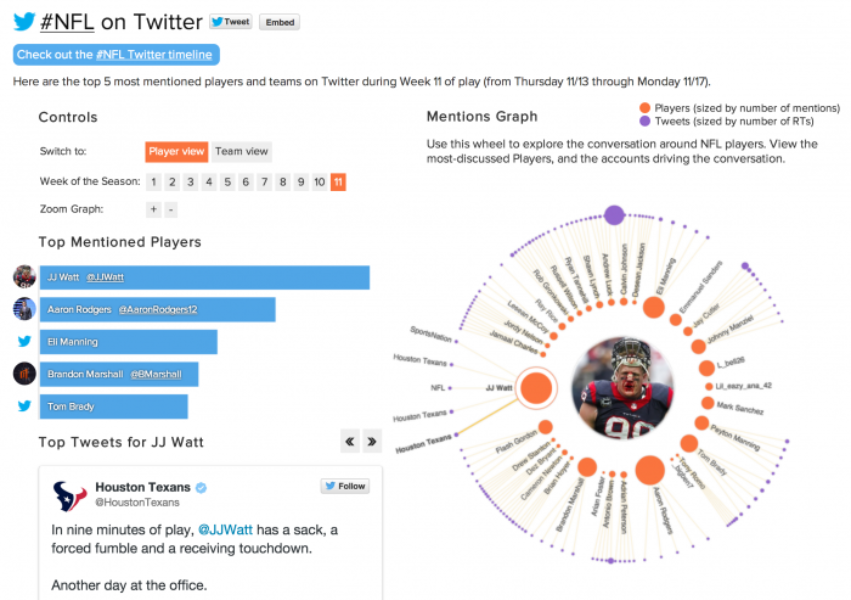 Miss a touchdown from week 11? @nflredzone has you covered:

And we put together this collection of Tweets from week 11. Enjoy!