Week 12 of the #NFL saw fans, players and media members come together on Twitter to discuss the #CatchOfTheYear by Odell Beckham, Jr. (@OBJ_3). Fans also Tweeted about the health and concern for @KCChiefs safety Eric Berry (@Stuntman1429), the @Patriots seventh win a row, the @Seahawks silencing critics in a big win over the @AZCardinals and much more.

On @SNFonNBC, the @dallascowboys beat NFC East rival @Giants 24-20 thanks to a Dez Bryant (@DezBryant) 13 yard game-winning TD pass from Tony Romo with 1:01 left in the game.

However, most of the attention on Twitter was about @Giants wide receiver Odell Beckham Jr. (@OBJ_3), who made what many are calling the #CatchOfTheYear when he caught this 43-yard TD pass from Eli Manning in the first quarter.

Fellow players and athletes turned to Twitter to celebrate the catch.

Even Beckham’s opponent, @DezBryant, said it was the best catch he ever saw:

And Beckham, who has gained over 60,000 followers since the catch and was the most mentioned player on Twitter this week, seems humbled by all of the attention.

Also on @SNFonNBC, the NFL announced that Katy Perry will headline the @SuperBowl#halftime show:

On Monday, @KCChiefs safety Eric Berry (@Stuntman1429) was placed on the season-ending non-football illness list after team doctors found a lump on his chest.

Teams turned to Twitter to send their well wishes to Berry.

On Sunday, the @Patriots continued their win streak by beating the @Lions 34-9 for the Pats’ seventh win in a row. Newly signed running back LeGarrette Blount (@LG_Blount), who was released by the @Steelers for walking off the field of last week’s game, led New England with two rushing touchdowns. Tom Brady threw for another 349 yards and a pair of TDs as well.

Despite throwing three interceptions, @Browns QB Brian Hoyer (@bhoyer6) marched his team down the field against the @Atlanta_Falcons to set up a game-winning 37-yard field goal by Billy Cundiff (@Billy_Cundiff). Cleveland welcomed the return of star WR Josh Gordon (@JOSH_GORDONXII), who finished with 120 yards receiving.

A key NFC West showdown saw the @Seahawks dominate the @AZCardinals 19-3 behind a defense that looked like the one so many feared in their Super Bowl run last season.

The @Jaguars were no match for the @Colts and new father T.Y. Hilton (@TYHilton13). Andrew Luck found Hilton – who prior to the game was in the hospital for the birth of his daughter – for 122 yards and a TD in the 23-3 rout. Check out Hilton’s celebration that paid tribute to his new baby.

Alfred Morris’ (@Trey_Deuces) 125 rushing yards weren’t enough for the @Redskins to upset the @49ers. Colin Kaepernick (@Kaepernick7) connected with Anquan Boldin (@AnquanBoldin) all day to give SF the 17-13 win:

The @Vikings surprisingly kept it close with division rival Green Bay, but @AarronRodgers12, Eddie Lacy (@Lil_Eazy_Ana_42) and the @Packers were too much in the 24-21 win. Lacy rushed for 125 yards and a caught a TD pass.

LeSean McCoy (@CutonDime25) rushed for 130 yards and a TD in perhaps his best game of the season in the @Eagles 43-24 win over the @TennesseeTitans. The @Eagles will play for first place in the NFC East against the @dallascowboys on Thanksgiving.

The @Bengals grinded out a tough 22-13 win over the @HoustonTexans behind a strong defense and big days from Andy Dalton (@andydalton14), A.J. Green (@ajgreen_18) and Jeremy Hill (@JeremyHill33).

Other notable moments from week 12 include a huge day for Peyton Manning and Demaryius Thomas (@DemaryiusT) in the @Broncos 39-36 win over the @MiamiDolphins, the @RAIDERS winning their first game of the season last Thursday and the @Ravens beating @DrewBrees and the @Saints 34-27 on @ESPNMondayNight night behind Justin Forsett (@JForsett), who ran for 182 yards and two TDs.

Here are the top five most-mentioned team accounts on Twitter during week 12 of play (Thursday, Nov. 20 through Monday, Nov. 24):

Click on the image below to explore this data visualization that features week 12’s most-mentioned players and teams (and related Tweets). We will update this data viz each week of the season on Tuesdays. 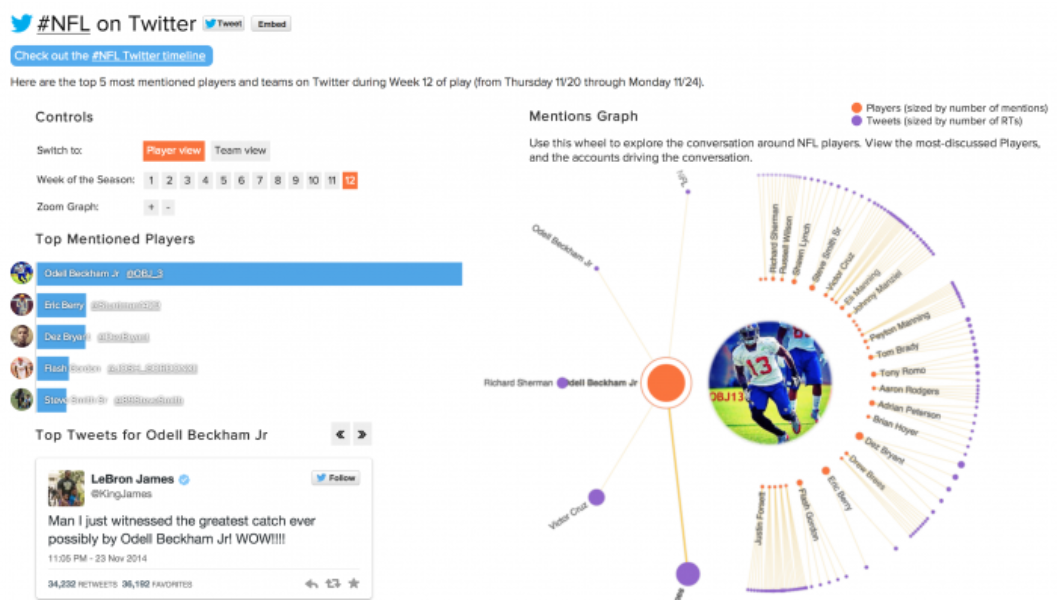 Miss a touchdown from week 12?

Remember to follow the NFL action on Twitter this Thanksgiving and come back every Tuesday as we recap how the #NFL played out each week. And in case you missed it, check out this blog post on our #NFL fan follower map.