As families spent time together cooking and relaxing on Thanksgiving, the #NFL served up three division games between longtime rivals as the perfect holiday side dish. Those games, along with other week 13 storylines such as Brady vs. Rodgers and the beginning of the Johnny Manziel era, played out on Twitter.

The holiday started in Detroit with an NFC North showdown between the @ChicagoBears and Detroit @Lions. Lions QB Matthew Stafford connected with star WR Calvin Johnson for two TDS en route to a 34-17 win. Running back Joique Bell (@JoiqueBell) added two scores on the ground as well.

In Dallas, first place in the NFC East was on the line and the @Eagles prevailed over the @dallascowboys 33-10. Philadelphia running back LeSean McCoy (@CutonDime25) ran wild for 159 yards and a TD, QB Mark Sanchez (@Mark_Sanchez) threw for 217 yards and a TD and the entire defense kept Dallas on their toes all day long. Receiver Jeremy Maclin (@jmac_18) went over 1,000 yards receiving on the season in the win as well.

The holiday night cap featured NFC West foes the @Seahawks and the @49ers. Seattle rode the legs of running back Marshawn Lynch (@MoneyLynch ), the leg of kicker Steven Hauschka and a much improved defense en route to a dominating 19-3 win. Richard Sherman (@RSherman_25) led the defense with two interceptions.

Pearl Jam and actor Chris Pratt were thankful for their home team winning on Thanksgiving:

In their first ever matchup against one another, Tom Brady and Aaron Rodgers (@AaronRodgers12) went toe-to-toe in the @Packers 26-21 win over the @Patriots. Rodgers threw for 368 yards and two TDs, while Eddie Lacy (@Lil_Eazy_Ana_42) provided balance for the Pack, as he rushed for a game-high 98 yards.

Despite being on the winning side, Green Bay safety Ha Ha Clinton-Dix (@haha_cd6) tweeted about his appreciation for New England tight end Rob Gronkowski (@RobGronkowski):

In a 26-10 defeat to the @buffalobills, the @Browns turned to first round draft pick Johnny Manziel (@Jmanziel2) in the fourth quarter as relief for a struggling QB Brian Hoyer (@bhoyer6).

Manziel received Tweets of encouragement, including one from LeBron James and Tampa Bay rookie WR Mike Evans, who played in college with Manziel:

JJ Watt (@JJWatt) continued his claim on being the best defensive player in the league with another huge game. Watt dominated with two sacks, a forced fumble and another receiving TD on offense in the @HoustonTexans 45-21 win over the @TennesseeTitans.

Houston QB Ryan Fitzpatrick threw for a career-high six TDs, including two to Deandre Hopkins (@Nukdabomb). Hopkins had a career-high 238 receiving yards for Houston and thanked his parents on Twitter after the win.

A high scoring affair played out in Indy between the @Redskins and the @Colts, but Andrew Luck proved to be too much for Washington after he threw for five TDs, including two to tight end Coby Fleener (@Coby), in the Colts’ 49-27 win.

Drew Brees (@drewbrees) also threw for five TDs, including one to Kenny Stills (@KSTiLLS), in the @Saints 35-32 win over the @Steelers.

Despite three TDs (two passing and one rushing) from Joe Flacco (@TeamFlacco), the @Ravens lost to the @Chargers 34-33. San Diego QB Philip Rivers led the Chargers with 383 yards and three TDs, including a game-winning drive that ended with a TD pass to Eddie Royal (@EddieRoyalWR) with 38 seconds left in the game.

On @SNFonNBC, the @Broncos rode the legs of running back C.J. Anderson (@CjAndersonRB9), who ran for a career-high 168 yards in Denver’s 29-16 win over the @KCChiefs.

The @Jaguars earned their second win of the year, upsetting the @Giants 25-24 thanks to a game winning Josh Scobee (@JoshScobee10) 43-yard field goal with 28 seconds left in the game. The Jags came back from 21 points down for the win.

The @AZCardinals lost their second consecutive game since losing starting QB Carson Palmer to injury, as the @Atlanta_Falcons controlled the game from the start in the 29-18 win. QB Matt Ryan (@M_Ryan02) and wide receiver Julio Jones (@juliojones_11) led the way for the Falcons, who regained first place in the NFC South with the win. Arizona also lost some key players to injury in the defeat.

On @ESPNMondaynight, the @miamidolphins defeated the @NYJets 16-13 to move into a six-way tie for the final wild card playoff spot in the AFC.

Other notable action from week 13 included the @Bengals squeaking out a close 14-13 win over the @TBBuccane3rs, the @Vikings taking care of the @Panthers 31-13 and the @STLouisRams shutting out the @RAIDERS 52-0 thanks to relentless defense and 117 rushing yards and two TDs from running back Tre Mason (@TreMason).

Here are the top five most-mentioned team accounts on Twitter during week 13 of play (Thursday, Nov. 27 through Monday, Dec. 1):

Click on the image below to explore this data visualization that features week 13’s most-mentioned players and teams (and related Tweets). We will update this data viz each week of the season on Tuesdays. 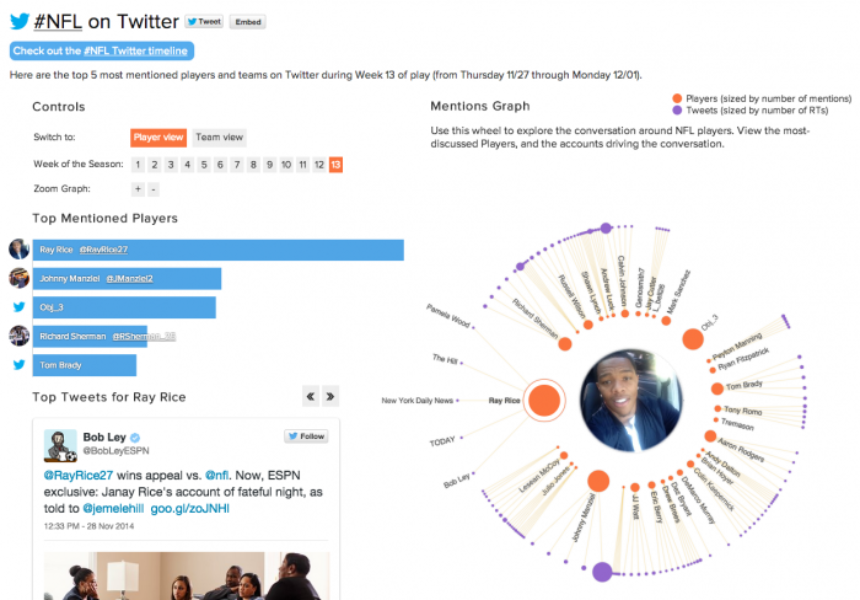 Miss a touchdown from week 13? @nflredzone has you covered:

And here’s a collection featuring Tweets from week 13: