Week 14 of the #NFL saw the @Seahawks prevail in a battle of the birds in Philly, while the @Patriots, @Packers and @AZCardinals become the first teams to get 10 wins. Those games, along with a major upset in the battle by the bay, all played out on Twitter.

The @Seahawks flew into Philly for a big NFC matchup against the @Eagles that had major playoff implications. Seattle’s defense dominated from start to finish and Russell Wilson (@DangeRussWilson) threw for two TDs in their 24-14 win.

In the loss, @Eagles running back LeSean McCoy (@CutonDime25) broke the record for most rushing yards in franchise history.

The @Patriots went into San Diego on @SNFonNBC and came out as the AFC’s top seed with a 24-13 win over the @Chargers. Tom Brady had another huge game, as did one of his favorite targets Julian Edelman (@Edelman11), in the 10th win of the season for the Pats.

The @AZCardinals got their 10th win as well, thanks to another big defensive effort and a 100-yard rushing game from rookie Kerwynn Williams (@kerWINning_) in his first action of the season.

On @ESPNMondayNight, Aaron Rodgers (@AaronRodgers12) and the @Packers also earned their 10th win in a 43-37 shootout over the @Atlanta_Falcons.

Thanks to a one-yard TD pass from Andrew Luck to T.Y. Hilton (@TYHilton13 ) with 32 seconds left in the game, the @Colts avoided an upset by the @Browns and won 25-24.

On Tuesday Jay Glazer (@JayGlazer) broke the news that Johnny Manziel (@JManziel2) will be the new @Browns starting QB.

The @Steelers and the @Bengals faced off in an AFC north showdown that saw Pittsburgh win convincingly 42-21 behind 185 rushing yards and three total TDs from star running back Le’veon Bell (@L_Bell26). Ben Roethlisberger threw for 350 yards and three TDs as well.

Joe Flacco (@TeamFlacco) threw for two scores in the @Ravens 28-13 over the @MiamiDolphins.

The @NYJets’ disastrous season continued after the @Vikings won 30-24 in OT on a walk-off 87-yard TD pass from Teddy Bridgewater to Jarius Wright (@Jay_Wright4).

In the battle by the bay, the @RAIDERS upset the @49ers 24-13, putting SF’s playoff hopes in danger. Rookie Oakland QB Derek Carr (@derekcarrQB) threw for 243 yards and three TDs.

The @Saints have to be disappointed with their effort as the @Panthers dominated on all facets of the game in their 41-10 win over New Orleans. QB Cam Newton (@CameronNewton) threw for three TDs and running back Jonathan Stewart (@jonathanstewar1) ran for 155 yards and a score.

The surging @STLouisRams earned their second consecutive shutout behind a dominating defensive effort in a 24-0 blowout over the @Redskins.

@Lions QB Matthew Stafford threw three TDs, including one to star WR Calvin Johnson en route to a 34-17 win over the @TBBuccaneers. Running back Joique Bell (@JoiqueBell) added 83 yards and a TD on the ground as well.

Arian Foster (@ArianFoster) rushed for 127 yards and a TD as his @HoustonTexans moved to 7-6 after defeating the @Jaguars 27-13. JJ Watt (@JJWatt) added another three sacks in his dominating season.

Other notable week 14 moments included Odell Beckham, Jr. (@OBJ_3) leading the @Giants to an easy 36-7 win over the @TennesseeTitans; the @Broncos beating the @buffalobills 24-17; and the @dallascowboys defeating the @ChicagoBears 41-28 on Thursday Night Football.

Here are the top five most-mentioned team accounts on Twitter during week 14 of play (Thursday, Dec. 4 through Monday, Dec. 8):

Click on the image below to explore this data visualization that features week 14’s most-mentioned players and teams (and related Tweets). We will update this data viz each week of the season on Tuesdays. 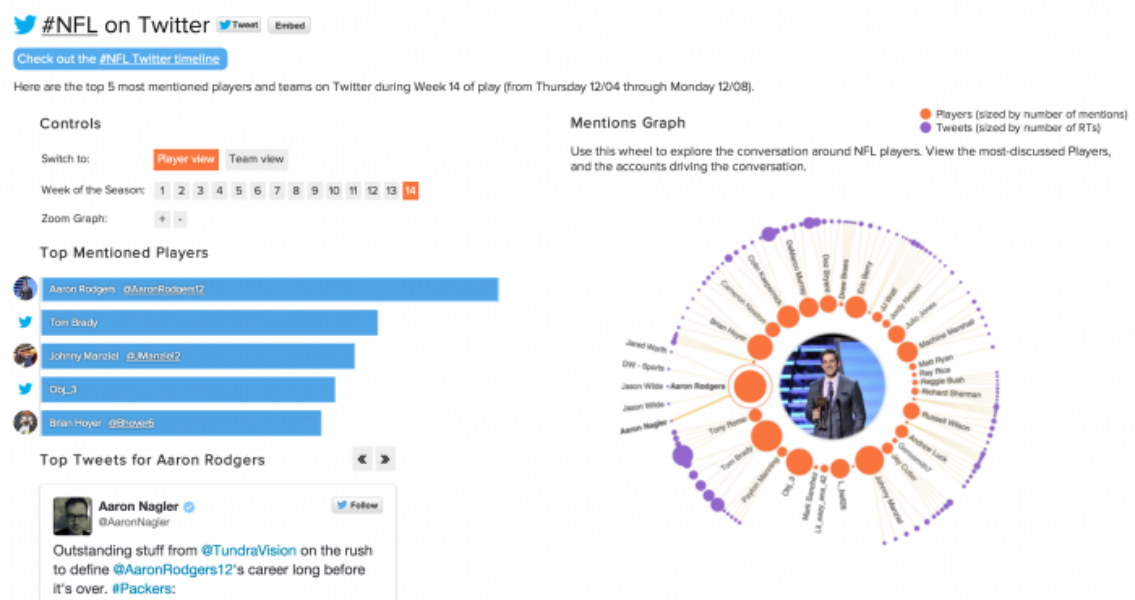 Miss a touchdown from week 14? @NFL has you covered:

And here’s a collection featuring Tweets from week 14: