Week 15 of the #NFL saw three teams clinch division titles, another team clinch a playoff berth, a handful of teams fall completely out of the playoff picture and a few major injuries to key players. With two weeks left in the regular season, all of the @NFL action on and off the gridiron played out on Twitter.

Despite their recent history of struggling in December, the @dallascowboys came into Philly on @SNFonNBC and beat the @Eagles 38-27. Dez Bryant (@DezBryant) caught three TDs from Tony Romo as the Cowboys moved into first place in the NFC East with the big win.

The NFL’s leading rusher, DeMarco Murray (@DemarcoMurray), scored twice on the ground for the Cowboys but broke a bone in his hand in the fourth quarter. Dallas hopes he can play this Sunday. And Philly’s starting quarterback Nick Foles (@NFoles_9) still isn’t cleared to return to play this week.

An AFC East battle between the @Patriots and @MiamiDolphins was no contest as Tom Brady, Rob Gronkowski (@RobGronkowski) and Julian Edelman (@Edelman11) led New England to a 41-14 blowout over Miami. The Pats clinched a division title with the win.

A defensive battle resulted in a 17-10 @Colts win over the @HoustonTexans. Andrew Luck threw another two TDs as Indy clinched the AFC South division title.

Houston lost starting QB Ryan Fitzpatrick for the rest of the season with a broken leg.

In perhaps the biggest upset of the week, the @buffalobills defense and special teams led them to a shocking 21-13 win over the @Packers. Green Bay fell from the two seed in the NFC to six.

The @Seahawks defense continued their great play in a 17-7 win over the @49ers. The loss eliminated San Francisco from the playoffs, while Seattle now has a chance for the one seed in the NFC thanks to the Green Bay loss.

The @Lions held on to win a close one against the @Vikings 16-14, keeping their playoff hopes strong as they moved to 10-4 on the season.

While all of the pre-game attention was on the debut of Johnny Manziel (@JManziel2) starting his first game for the @Browns, the @Bengals dominated the actual game behind a stout defense and stellar running game led by Jeremy Hill (@JeremyHill33) in a 30-0 blowout.

The @Steelers road the back of running back Le’veon Bell (@L_Bell26) in their 27-20 win over the @Atlanta_Falcons.

On @ESPNMondaynight, the @Saints moved into first place in the NFC South after they easily handled the @ChicagoBears 31-15 thanks to 375 passing yards and three TDs from New Orleans QB @drewbrees.

Also in week 15 of the #NFL: The @Ravens stayed in the playoff hunt with a 20-12 win over @Jaguars; the @Panthers won a close NFC South showdown over the @TBBuccaneers 20-19 (without starting QB @CameronNewton); and the @KCChiefs easily took care of division rival @RAIDERS 31-13.

Here are the top five most-mentioned team accounts on Twitter during week 15 of play (Thursday, Dec. 11 through Monday, Dec. 15):

Click on the image below to explore this data visualization that features week 15’s most-mentioned players and teams (and related Tweets). We will update this data viz each week of the season on Tuesdays. 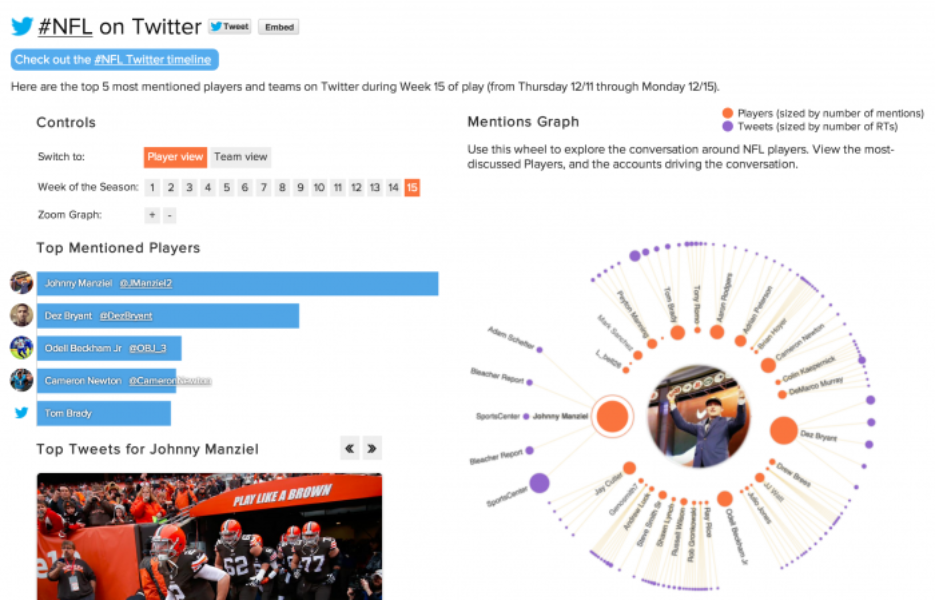 Miss a touchdown from week 15? @NFL has you covered:

And here’s a collection featuring Tweets from week 15: