The #NFL playoff picture became much clearer during an action-packed week 16 that concluded with nine teams guaranteed a spot in the postseason and three spots still up for grabs with one week left to play. All of this week’s top plays, moments and news on and off the field played out on Twitter.

The @Seahawks put up a franchise-record 596 yards to close in on another NFC West title – and the No. 1 seed in the NFC – after easily defeating @AZCardinals 35-6 on @SNFonNBC. Seattle QB Russell Wilson (@DangeRussWilson) threw for a pair of TDs and ran for another, while running back Marshawn Lynch (@MoneyLynch) rushed for 113 yards and two scores in the win.

@MoneyLynch’s 79 yard TD run early in the fourth quarter had Twitter buzzing. Check out the play, the radio call and love from @KingJames:

With playoff hopes on the line for the @Eagles on Saturday night, @RGIII and the @Redskins upset their NFC East rivals 27-24. Alfred Morris (@Trey_Deuces) ran for 88 yards and a TD in the win while former Eagle DeSean Jackson (@DeSeanJackson11) had a 126 receiving yards in the upset.

The Philly loss meant the Detroit @Lions clinched a playoff berth before they even had to play on Sunday.

And the @Lions rode the momentum of the good news in their 20-14 win over the @ChicagoBears.

The @dallascowboys completely dominated the @Colts 42-7 and their win coupled with the Philly loss earned Dallas the NFC East title and a spot in the playoffs.

The @Packers clinched a spot in the playoffs with a 20-3 win over the TBBuccaneers. Aaron Rodgers (@AaronRodgers12) threw for 318 yards and a TD and Eddie Lacy (@Lil_Eazy_Ana_42) rushed for 99 yards and a TD in Green Bay’s win. The winner of next week’s Detroit vs. Green Bay game will determine the NFC North title.

On Saturday night, the @Chargers came back from 21 down to beat the @49ers in overtime 38-35. Philip Rivers threw for four TDs, including two to tight end Antonio Gates (@AntonioGates85) and one to Eddie Royal (@EddieRoyalWR). San Diego’s win gives them a shot at a playoff berth depending on how things shake out next week.

The @HoustonTexans also kept their slim playoff chances alive with a 25-13 win over the @Ravens. JJ Watt (@JJWatt), who became the all-time sacks leader in Houston history, and the Houston defense dominated, while star running back Arian Foster (@ArianFoster) rushed for 96 yards and even threw a TD.

On @ESPNMondayNight the @Bengals forced Peyton Manning to throw four interceptions and beat the @Broncos 37-28. The win secured a playoff birth for Cincinnati for the fourth consecutive season.

The @Steelers also earned a spot in the playoffs with their 20-12 win over the @KCChiefs. The winner of next week’s @Steelers vs. @Bengals game will win the AFC North.

The @Patriots narrowly avoided an upset by beating AFC East rival @NYJets 17-16. New England earned a bye in the first round of the playoffs and wound up clinching the number one seed after the @Broncos lost.

The @Atlanta_Falcons 30-14 win over the @Saints eliminated New Orleans from the playoffs.

And since the @Panthers beat the @Browns, Carolina and Atlanta will face off next week for the NFC South crown and a spot in the playoffs.

Other notable games included Odell Beckham, Jr. (@OBJ_3) and the @Giants beating the @STLouisRams 37-27; the @MiamiDolphins defeating the @Vikings 37-35 thanks to a blocked punt that resulted in a safety with 41 seconds left in the game; and the @RAIDERS eliminating the @buffalobills from playoff contention with an upset victory.

Here are the top five most-mentioned team accounts on Twitter during week 16 of play (Thursday, Dec. 18 through Monday, Dec. 22): 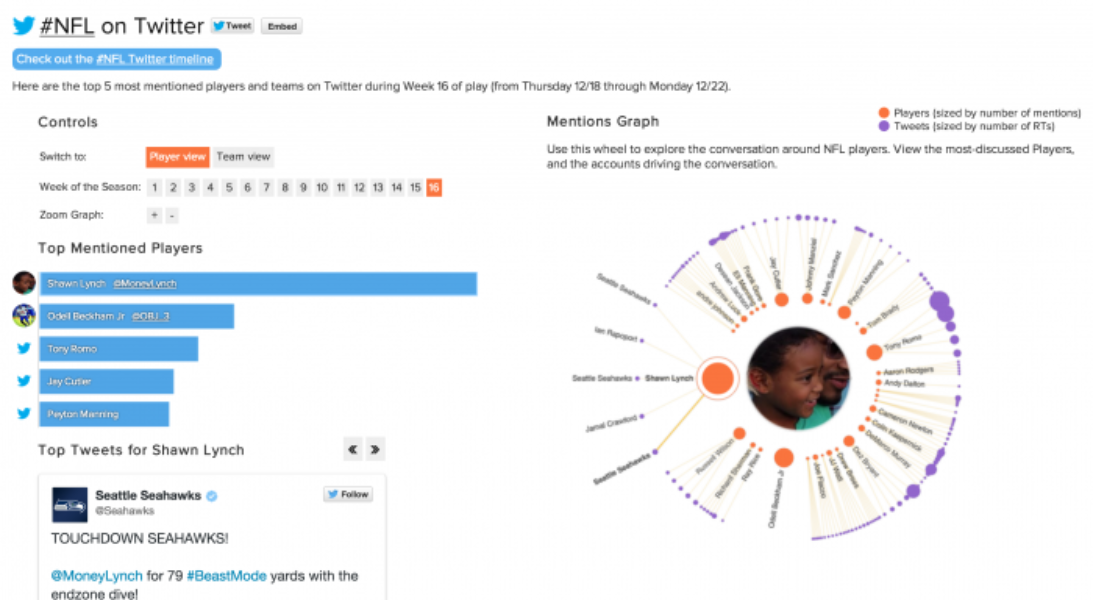 Miss a touchdown from week 16? @NFL has you covered:

Come back next Tuesday as we recap how the #NFL final regular season week played out on Twitter. And in case you missed it, check out this blog post on our #NFL fan follower map.