The #NFL playoff picture is now set with 12 teams ready to battle for the title of @SuperBowl XLIX champion. Week 17 provided thrills for some fans and disappointment for others, and Twitter was your home for all of the action on and off the field in the final week of the regular season.

Let’s take a look at the week 17 games that had playoff implications.

On @SNFonNBC, the @Steelers beat the @Bengals 27-17 behind big plays from QB Ben Roethlisberger and WR Antonio Brown (@AntonioBrown84). The Steelers won the AFC North with the win and will host the @Ravens next Saturday night while the Bengals will travel to play the @Colts next Sunday.

In the game, Steelers’ star running back Le’Veon Bell (@L_Bell26) left with a knee injury and the team hopes he’ll be ready for their upcoming game on Saturday.

The Ravens earned the final AFC playoff Wild Card spot by beating the @Browns 20-10 on Sunday, while the Colts won their final regular season game against the @TennesseeTitans.

In Green Bay, the @packers took home their fourth straight NFC North title by beating the @Lions 30-20. Green Bay has a bye in the playoffs next week while Detroit travels to play the @dallascowboys next Sunday.

Dallas finished their season with an easy 44-17 win over the @Redskins. Running back DeMarco Murray (@DeMarcoMurray) broke Emmitt Smith’s (@EmmittSmith22) single season team rushing record and WR Dez Bryant (@DezBryant) broke the team record for TD’s in a season in the win.

Despite the Cowboys big season, the NFC championship will go through Seattle. The @Seahawks earned the No. 1 seed in the NFC after beating the the @STLouisRams 20-6.


Despite losing to the @buffalobills on Sunday, the @Patriots are the No. 1 seed in the AFC. The @Broncos earned a bye and a the No. 2 seed after beating the @RAIDERS 47-14.

Thanks to a 34-3 dominating win over the @Atlanta_Falcons, the @Panthers won the NFC South and host the @AZCardinals in a Wild Card game next Saturday.

Even though they lost 20-17 to the @49ers, Arizona is ready for the playoffs.

Unfortunately, when the @NFL regular season ends, so does the tenure for some head coaches. It’s why many people refer to the Monday after the final weekend as “Black Monday.”

The @nyjets announced that GM John Idzik and head coach Rex Ryan will not return in 2015.

Head coach Mike Smith was relieved of his duties in Atlanta as was coach Marc Trestman and GM Phil Emery in Chicago.

Here are the top five most-mentioned team accounts on Twitter during week 17 of play (Thursday, Dec. 25 through Monday, Dec. 29): 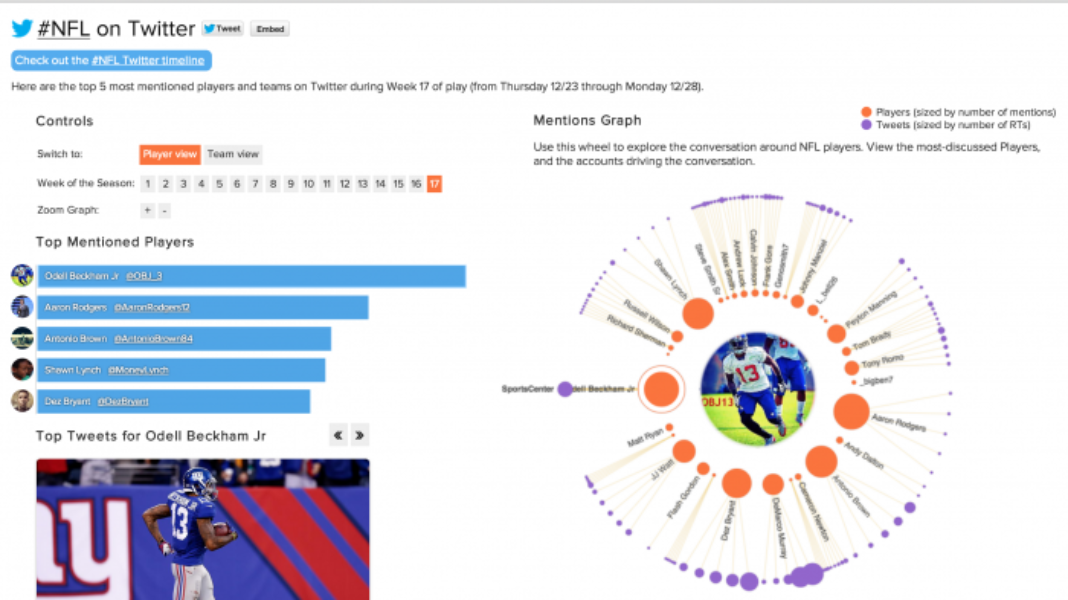 Miss a touchdown from week 17? @NFL has you covered:

Come back next Tuesday as we recap how the #NFL Wild Card playoff round played out on Twitter.