The second week of the #NFL season was dominated by upsets, injured stars, clutch performances from familiar names and another off-the-field story. And while the play on the gridiron provided thrills, the conversation about the top stories on and off the field played out on Twitter.

The #NFL saw fantastic performances by star veterans and teams this week that drove the Twitter conversation. Missed a touchdown? @NFL has you covered:

The @Browns, @Chargers, @buffalobills and @ChicagoBears came up with big upset wins, while veterans Brandon Marshall (@BMarshall) and Antonio Gates (@AntonioGates85) each found the fountain of youth by scoring three touchdowns apiece.

@RSherman_25 turned to Twitter to answer critics after his @Seahawks lost to the @Chargers:

When the @Vikings announced that they were deactivating star running back Adrian Peterson (@AdrianPeterson) for Sunday’s game due to his legal trouble off the field, NFL fans and media members immediately discussed the breaking news.

As reported by @ESPNNFL, Peterson will be back with the @Vikings this week:

After the announcement, he Tweeted this statement:

Here are the top five most-mentioned team accounts on Twitter during week two of play (from Thursday, Sept. 11 through Monday, Sept. 15):

Click on this image below to explore this data visualization that features week two’s most mentioned players and teams (and related Tweets). We will update this data viz each week of the season on Tuesdays. 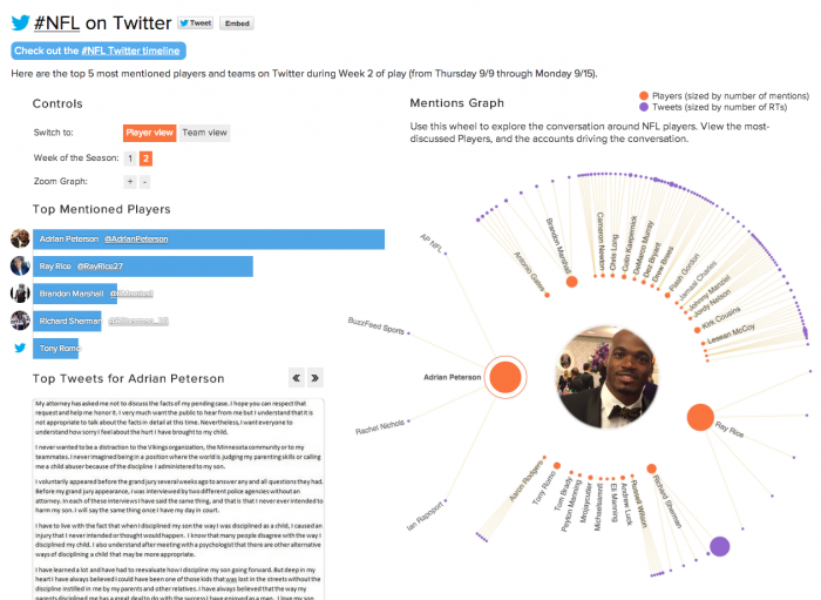 Week two was filled with close games, upsets and big plays. Here are the top five most-Tweeted games during and around live telecasts based on number of Tweets, as measured by Nielsen Social (@NielsenSocial):

Week 2: Tweets of the week

Missed a moment or two during a busy #NFL weekend? We put together this collection of Tweets from week two. Enjoy!