Week three of the #NFL season saw a Super Bowl 48 rematch, numerous new quarterbacks under center, serious injuries to key players, a few blowout wins and more chatter about off-the-field stories. While the drama played out, Twitter was your home turf for all the @NFL conversations.

In a rematch of Super Bowl 48, Russell Wilson (@DangeRussWilson) and Marshawn Lynch (@MoneyLynch) led the defending champion @Seahawks to a dramatic overtime victory over Peyton Manning and the @Broncos.

After the game, @Seahawks defensive back DeShawn Shead (@dshead24) proposed to his girlfriend on the field:

@Steelers wide receiver Antonio Brown (@AntonioBrown84) and a two-headed rushing attack by Le’Veon Bell (@L_Bell26) and LeGarrette Blount (@LG_Blount) led Pittsburgh to an upset victory on the road against the @Panthers:

The three players even posed for a selfie on the field:

Other notable stories included a comeback 34-31 win by the @dallascowboys over the @STLouisRams, injuries to numerous key players and the @Bengals moving to 3-0 in a game that saw quarterback Andy Dalton (@andydalton14) catch a touchdown pass.

Both the @Vikings and @Ravens turned to Twitter to update fans and media on the latest stories regarding Ray Rice (@RayRice27) and Adrian Peterson (@AdrianPeterson):

Despite the off-the-field drama, other teams were mentioned more on Twitter this week. Here are the top five most-mentioned team accounts on Twitter during week three of play (Thursday, Sept. 18 through Monday, Sept. 22):

Click on this image below to explore this data visualization that features week three’s most mentioned players and teams (and related Tweets). We will update this data viz each week of the season on Tuesdays. 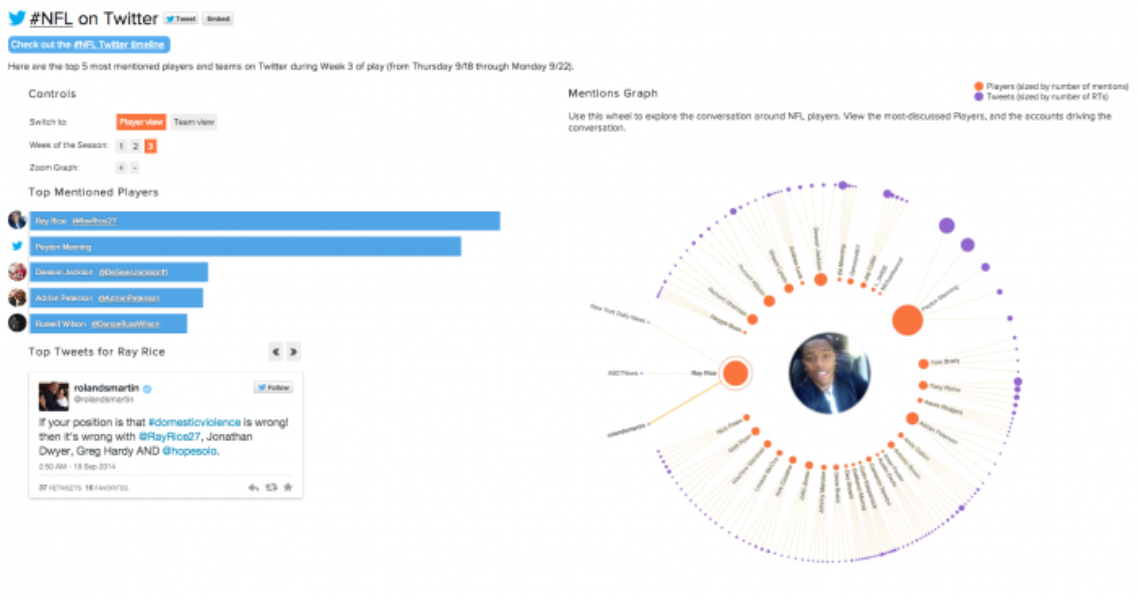 Week three was filled with close games, big plays and a few upsets. Here are the top five most-Tweeted games during and around live telecasts based on number of Tweets, as measured by Nielsen Social (@NielsenSocial):

Miss a touchdown in what was a high-scoring week in the #NFL? @NFL has you covered:

And we put together this collection of Tweets from week three. Enjoy!