Week four of the #NFL brought football to London, saw old faces in new places and proved that you can never predict the outcome on the field or on Twitter, as we once again witnessed numerous blowout victories, a few upsets and a lot of great Tweets.

While fans in the UK were treated to American football, the @RAIDERS proved to be no match for the @miamidolphins at Wembley Stadium in London:

Manning found up and coming tight end Larry Donnell (@BEYOND_GREATNES) in the end zone three times in the @NYGiants 45-14 thrashing of the @Redskins:

With two touchdowns and 139 receiving yards, wide receiver Steve Smith Sr. (@89SteveSmith) led the @Ravens to a big win against the the @Panthers, his former team.

JJ Watt’s (@JJWatt) pick-six for a touchdown helped secure a 23-17 win for the @HoustonTexans over the @buffalobills:

The best game of the day had to be the @TBBuccaneers comeback 27-24 win over the @Steelers. Vincent Jackson (@VincentTJackson) scored a game-winning TD catch with just seconds remaining in the game:

Despite the loss, @Steelers wide receiver Antonio Brown (@AntonioBrown84) was one of Sunday’s top performers after scoring two more touchdowns:

In perhaps the best matchup of week four, the @Eagles got out to a fast 21-10 lead over the @49ers thanks to three non-offensive touchdowns.

But Colin Kaepernick (@Kaepernick7) and Frank Gore put the team on their backs and won the NFC showdown 26-21:

@SNFonNBC featured a big matchup between the @Saints and the @dallascowboys. Despite a valiant late comeback effort by Drew Brees (@DrewBrees) and the @Saints, Tony Romo, Terrance Williams (@TerranceWill2) and DeMarco Murray (@DeMarcoMurray) got Dallas out to a big lead that proved to be too much for New Orleans to overcome:

Other notable stories included the @Vikings beating the @Atlanta_Falcons behind three Matt Asiata touchdowns, and Jamaal Charles (@JCharles25) and the @KCChiefs beating the @Patriots convincingly on @ESPNMondayNight:

And on Monday the @buffalobills broke news on Twitter when they announced that Kyle Orton would replace E.J. Manuel (@EJManuel3) as the team’s starting quarterback:

Here are the top five most-mentioned team accounts on Twitter during week four of play (Thursday, Sept. 22 through Monday, Sept. 29):

Click on this image below to explore this data visualization that features week four’s most mentioned players and teams (and related Tweets). We will update this data viz each week of the season on Tuesdays. 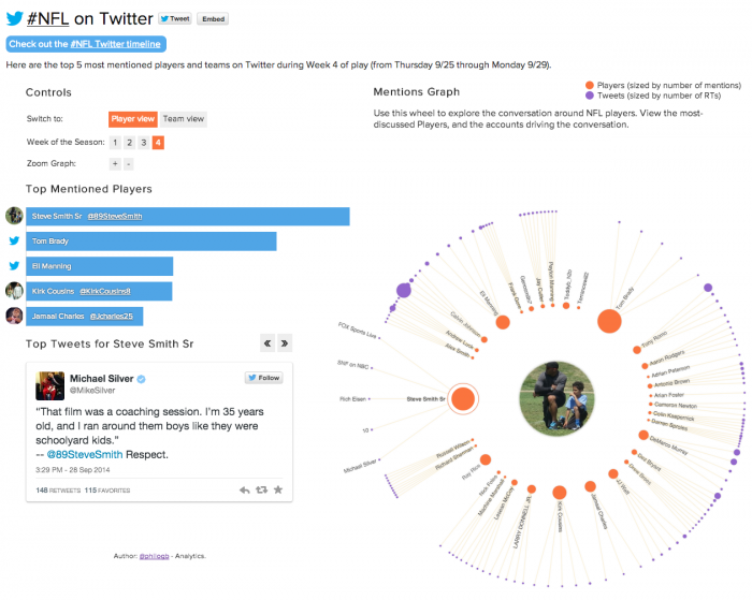 Week four was filled with high-scoring games, big plays and a some upsets. Here are the top five most-Tweeted games during and around live telecasts based on number of Tweets, as measured by Nielsen Social (@NielsenSocial):

Miss a touchdown in what was a high-scoring week in the #NFL? @nflredzone has you covered:

And we put together this collection of Tweets from week four. Enjoy!