#NFL week five provided football fans with big-time comebacks, veteran stars breaking records, key players going down with significant injuries and plenty of Tweets from teams, players, media and fans. And with no undefeated teams remaining, the 1972 @MiamiDolphins have yet another year to sit alone as the last team to go unbeaten.

Star quarterbacks Peyton Manning and Tom Brady led their teams – the @Broncos and @Patriots – to big victories, and they both broke records along the way:

@Broncos wide receivers Wes Welker (@WesWelker) and Demaryius Thomas (@demaryiust) also broke records in Denver’s 40-21 victory over the @AZCardinals. Welker became the all-time leader in receptions by an undrafted player, while Thomas had the most receiving yards (226) in a game by a @Broncos receiver:

Last night on @ESPNMondayNight, a younger quarterback led the defending champion @Seahawks to a 27-17 win over the @Redskins. Russell Wilson (@DangeRussWilson) threw for two touchdowns and rushed for 122 yards and another touchdown.

On Sunday morning, @NFLonFOX insider Jay Glazer (@JayGlazer) and other media outlets reported that @49ers coach Jim Harbaugh would not return to San Francisco in 2015. Team CEO Jed York responded to the reports on Twitter:

Despite the off-the-field rumors, the @49ers went on to beat former quarterback Alex Smith and the @KCChiefs 22-17 behind workhorse running back Frank Gore and quarterback Colin Kaepernick (@Kaepernick7):

This week in the #NFL also saw a few comebacks and overtime wins. Dan Carpenter’s (@dancarpenterNFL) 58-yard field goal sealed a comeback 17-14 victory for the @buffalobills over the @Lions.

After the @buffalobills defense led the team to a big win, players carried defensive coordinator Jim Schwartz, the former head coach of the @Lions, off the field:

Another overtime thriller played out in Dallas, where Tony Romo, Demarco Murray (@DemarcoMurray), Dez Bryant (@DezBryant) and the @dallascowboys won state bragging rights in their 20-17 win over the @HoustonTexans:

@dallascowboys hall of fame running back Emmitt Smith (@EmmittSmith22) turned to Twitter to congratulate his former team and @DeMarcoMurray, who has rushed for over 100 yards in each game this season:

The @Browns overcame the biggest deficit to win of any road team in #NFL history when quarterback Brian Hoyer (@bhoyer6) led his team on a 26-0 run to finish the game against the @TennesseeTitans. The @Browns, who were down 28-3 in Nashville with 31 minutes to play, won 29-28:

Down 21-7 in the second quarter, Cam Newton (@CameronNewton) and Greg Olson (@gregolsen88) connected on two touchdowns in the @Panthers 31-24 comeback win over the @ChicagoBears:

After trailing 34-7 in Philadelphia, the @StLouisRams almost completed a comeback against the @Eagles. Despite a great second half by quarterback Austin Davis (@ADavis1025) and wide receiver Brian Quick (@BQuick_SC), the Rams fell short and lost 34-28. Philly tied a record for most return touchdowns through five games when Chris Maragos (@ChrisMaragos) scored a TD after a punt block:

Philadelphia’s Trent Cole (@pro_hunt58) celebrated a birthday after the win:

We also saw the first shutout of the #NFL season in week five. A stingy defense and big day from undrafted rookie running back Branden Oliver (@BoBelieves) led to a @Chargers 31-0 win over the @NYJets:

Other notable week five stories include Andrew Luck leading the @Colts over the @Ravens 20-13 in a defensive battle, Aaron Rodgers (@AaronRodgers12) and Eddie Lacy (@Lil_Eazy_Ana_42) helping the @Packers destroy the @Vikings on Thursday Night Football, and the @Giants beating the @Atlanta_Falcons.

There were also several injuries sustained in week five that will affect several teams:

Here are the top five most-mentioned team accounts on Twitter during week four of play (Thursday, Oct. 2 through Monday, Oct. 6):

Click on the image below to explore this data visualization that features week four’s most mentioned players and teams (and related Tweets). We will update this data viz each week of the season on Tuesdays. 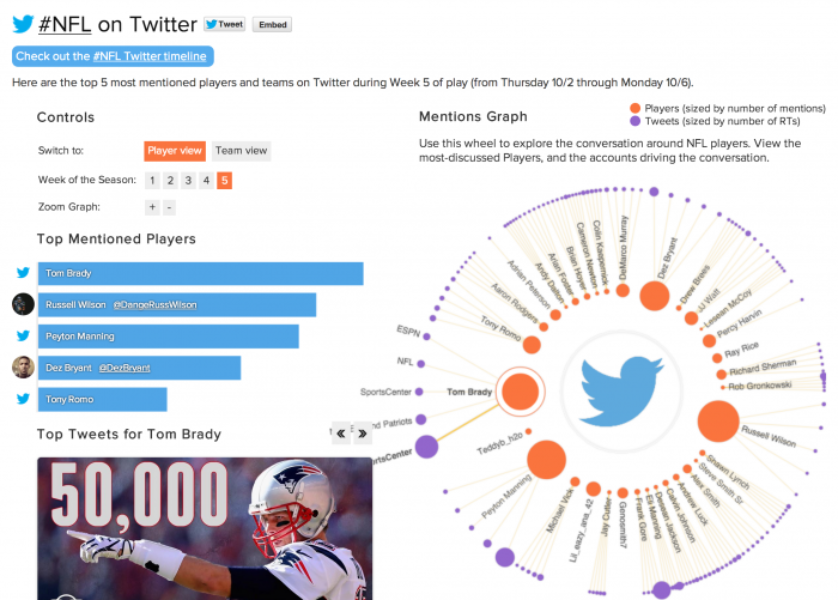 Week five was filled with upsets, comebacks and overtime thrillers. Here are the top five most-Tweeted games during and around live telecasts based on number of Tweets, as measured by Nielsen Social (@NielsenSocial). Data does not include the Arizona Cardinals at Denver Broncos game on Sunday, 10/5/14.

And here are the moments that sparked the top Tweets per minute (TPM) peaks during live televised games, as measured by Nielsen Social (@NielsenSocial). Data does not include the Arizona Cardinals at Denver Broncos game on Sunday, 10/5/14.

Miss a touchdown from week five? @NFL has you covered:

And we put together this collection of Tweets from week five. Enjoy!