Week six of the #NFL saw two NFC East teams come out with big victories, late heroics by the @Packers, elite performances by Joe Flacco (@TeamFlacco), Tom Brady and Peyton Manning, a season-ending injury to Victor Cruz (@TeamVic) and the first tie of the season.

Perhaps the biggest surprise of the young season are the 5-1 @dallascowboys, who beat the defending champion @Seahawks 30-23 in Seattle on Sunday. Dallas got its sixth straight 100-yard plus rushing game from DeMarco Murray (@DemarcoMurray), and once again saw strong play from Tony Romo and Dez Bryant (@DezBryant).

The @dallascowboys went on to win thanks to a big third-down tip-tow catch by Terrance Williams (@TeranceWill2) late in the fourth quarter:

A few other sports stars were happy with the Dallas win:

Another NFC East team moved to 5-1 this season when the @Eagles took care of the rival @Giants on @SNFonNBC. Behind a smothering defense and high octane offense, Philly earned a 27-0 shutout. The @Eagles offense saw LeSean McCoy (@CutonDime25) rumble for 149 yards on the ground, while second-year tight end Zach Ertz (@ZERTZ_86) found the end zone. Connor Barwin’s (@ConnorBarwin98) three sacks led the defense.

As if the poor outing in Philadelphia wasn’t enough for the @Giants, they lost Victor Cruz (@TeamVic) for the season:

The heat was on in Miami, where Aaron Rodgers (@AaronRodgers12) led his @packers to a last second 24-20 comeback win over the @MiamiDolphins. A fake spike pass to Davante Adams set up the next play in which Rodgers was able to find Andrew Quarless in the endzone for a touchdown with just three seconds left to seal the win.

Up north in Buffalo, Tom Brady threw for four touchdowns in the @Patriots 37-22 win over the @buffalobills. Brandon Lafell (@Blafell1) caught two touchdowns, while both Rob Gronkowski (@RobGronkowski) and Julian Edelman (@Edelman11) both had over 90 yards receiving as New England secured first place in the AFC East:

The new isn’t as good for @Patriots running back Stevan Ridley (@StevanRidley) and linebacker Jerod Mayo:


In the AFC North, a role reversal of sorts played out as the @Browns dominated the @Steelers 31-10 in Cleveland behind a stingy defense, a strong rushing attack by Ben Tate ( @BenTateRB) and Isaiah Crowell ( @IsaiahCrowell34) and mistake-free ball by quarterback Brian Hoyer ( @bhoyer6)

Another AFC North team pretty much wrapped things up by halftime, as Joe Flacco (@TeamFlacco) and the @Ravens beat the @TBBuccaneers 48-17. Flacco threw five TDs in the first half, including two to Torrey Smith (@TorreySmithWR).

@Broncos quarterback Peyton Manning got even closer to the all-time touchdown record with three TD passes in his team’s 31-17 win over the @NYJets. After the game, Manning already had his mind set on next week’s matchup versus the @49ers:

More bad news came for the @NYJets on Monday when news broke that they have lost starting defensive back Dee Milliner for the year:

In Oakland, rookie quarterback Derek Carr (@derekcarrqb) and the @RAIDERS almost pulled off an upset but Philip Rivers and Branden Oliver (@BoBelieves) played well to lead the @Chargers to the win and a 5-1 record.

Carson Palmer returned for the @AZCardinals and along with Larry Fitzgerald (@LarryFitzgerald), led Arizona to a 30-20 win over the @Redskins.

In the most anticlimactic result of the week, the @Bengals and @Panthers game ended in a 37-37 tie. Carolina had big performances from Cam Newton (@CameronNewton) and Greg Olsen (@gregolsen88), while Andy Dalton (@andydalton14), Giovani Bernard (@G_Bernard25) and Mohamed Sanu (@Mo_12_Sanu) stepped up for Cincy.

Other week six storylines included Jay Cutler and Matt Forte (@MattForte22) driving the @ChicagoBears over the @Atlanta_Falcons; Colin Kaepernick (@Kaepernick7), Anquan Boldin (@AnquanBoldin) and the @49ers winning an @ESPNMondayNight NFC West showdown against the @StLouisRams; and Andrew Luck and T.Y. Hilton (@TYHilton13) connecting for 223 yards in the air in the @Colts Thursday night win over the @HoustonTexans.

Despite being on the losing side last Thursday, @HoustonTexans defensive end J.J. Watt (@JJWatt) continued to make a case for MVP, as he had seven tackles, two sacks, three tackles for loss, and a fumble returned 45 yards for a touchdown.

Here are the top five most-mentioned team accounts on Twitter during week six of play (Thursday, Oct. 9 through Monday, Oct. 13):

Click on the image below to explore this data visualization that features week four’s most mentioned players and teams (and related Tweets). We will update this data viz each week of the season on Tuesdays. 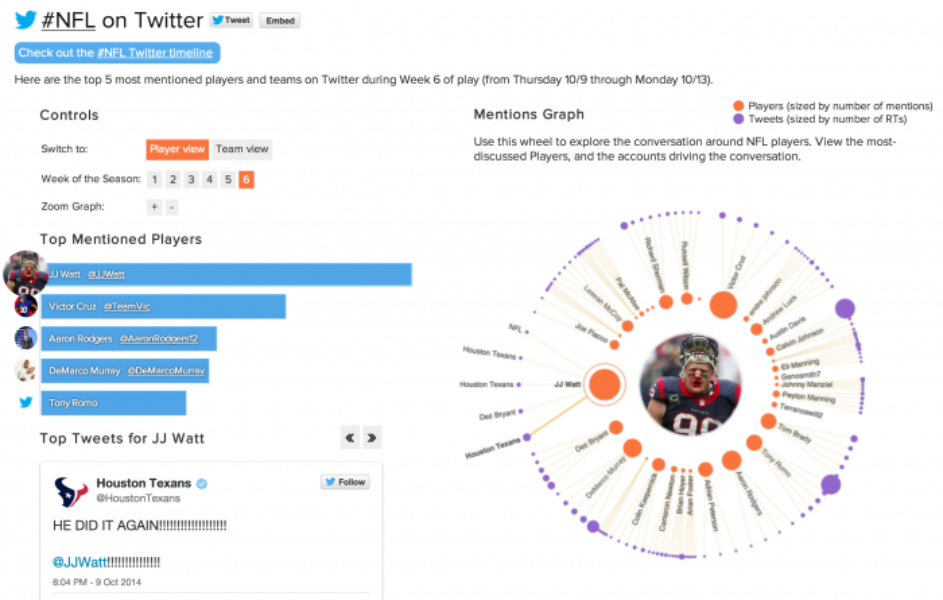 Miss a touchdown from week six? @NFL has you covered:

And we put together this collection of Tweets from week six. Enjoy!