This week, the #NFL conversation was dominated by records, upsets, injuries and a rare in-season trade – and all of the news on and off the field played out on Twitter.

With his third touchdown pass of the game, Peyton Manning broke Brett Favre’s (@Favre4Official) all-time @NFL record for touchdown passes with 509 when he found Demaryius Thomas (@DemaryiusT) in the endzone. Football fans had #Peyton509 trending on Twitter.

The @49ers were no contest for the @Broncos, as Denver won convincingly 42-17 on @SNFonNBC. In the defeat, the @49ers likely lost center Daniel Kilgore (@DanielKilgore67) for the season.

Thanks to a trick play punt return and a gutsy fake punt late in the game, the @STLouisRams upset the defending @SuperBowl champion @Seahawks 28-26. Rookie running back Tre Mason (@TreMason) led the way with 85 yards rushing and his first career TD, while Stedman Bailey (@iamSB3) and punter Johnny Hekker (@JHekker) were special team heroes for the Rams.

Twitter was abuzz about the @Seahawks on the Friday night before the game, when @NFLonFOX insider Jay Glazer (@JayGlazer) broke the news that they traded Percy Harvin (@Percy_Harvin) to the @NYJets.

The night before the trade, Tom Brady threw for three touchdowns in the @Patriots 26-24 win over the @NYJets on Thursday Night Football. New England sealed the victory with a blocked field goal as time expired:


Speaking of New York, the @DallasCowboys became the first six-win team on Sunday when they defeated the @Giants 31-21. DeMarco Murray ( @DemarcoMurray) became the first player in history to rush for more than 100 yards in his first seven games of a season. His offensive teammates Tony Romo, Dez Bryant ( @DezBryant) and backup tight end Gavin Escobar ( @GavinEscobar89) also put up big games.

In Green Bay, the @Packers put on another offensive onslaught with a 38-17 victory over the @Panthers. Aaron Rodgers (@AaronRodgers12) tied Tom Brady’s record by throwing for three touchdowns and no interceptions for the fourth straight game.

History was also made in Kansas City, where Jamaal Charles (@Jcharles25) and Alex Smith led the @KCChiefs to a 23-20 win over the @Chargers, ending San Diego’s five-game winning streak. After rushing for 95 yards and a TD, Charles became the Chiefs all-time leading rusher.

The @Colts shutout the @Bengals 27-0 behind a balanced offensive effort and dominant defensive game. Andrew Luck threw for 344 yards and two touchdowns, while Ahmad Bradshaw (@AhmadBradshaw) had a touchdown on the ground and in the air. This was the @Colts first shutout since 2008 and wide receiver Reggie Wayne became just the ninth player in NFL history to reach 14,000 receiving yards.

The @buffalobills defeated the @Vikings 17-16, thanks to quarterback Kyle Orton (sans mustache) finding rookie WR Sammy Watkins (@SammyWatkins) for two touchdowns, including a game-winning score with one second left.

In a back and forth game, the @Redskins defeated the @TennesseeTitans on a last second game-winning field goal by Kai Forbath (@KaiForbath). Colt McCoy (@ColtMcCoy) replaced Kirk Cousins (@KirkCousins8) at QB for Washington and threw a 70-yard TD pass on his first attempt. However, the team lost starting linebacker Brian Orakpo (@rak98) for the remainder of the season with an injury.

The @miamidolphins brought the heat to the @ChicagoBears behind a solid defensive showing and strong play from quarterback Ryan Tannehill (@ryantannehill1). Reports surfaced after the game that Brandon Marshall (@BMarshall) was not happy about the @ChicagoBears performance in the lockerroom.

Other week six storylines included the @Ravens beating the @Atlanta_Falcons 29-7; the @Jaguars earning their first win of the season thanks to a breakout game by running back Denard Robinson (@DenardX); the @AZCardinals improving to 5-1 after beating the @RAIDERS; and the @Steelers beating the @HoustonTexans on @ESPNMondayNight.

Here are the top five most-mentioned team accounts on Twitter during week seven of play (Thursday, Oct. 13 through Monday, Oct. 20): 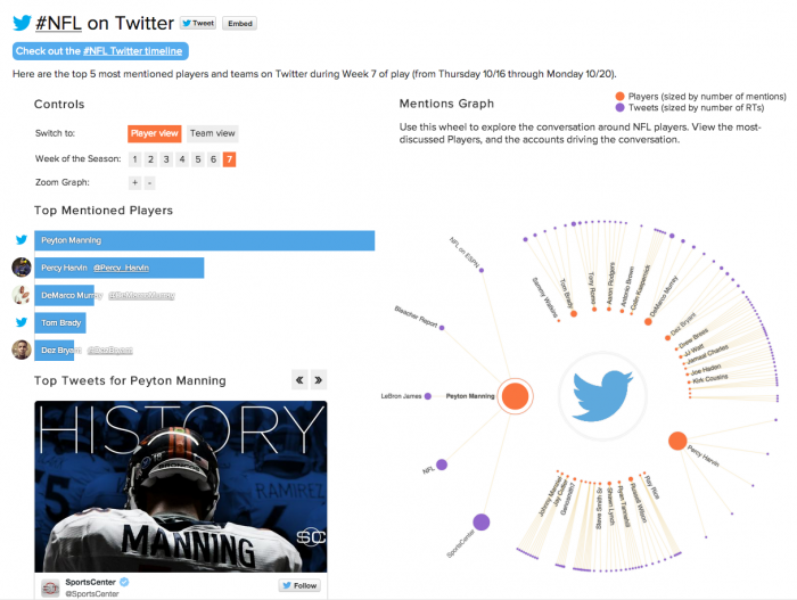 Miss a touchdown from week seven? @NFL has you covered:

And we put together this collection of Tweets from week seven. Enjoy!