Week eight of the @NFL belonged to the quarterbacks, as four players threw for over 400 yards for the first time in league history. Along with several games featuring last minute heroics, football returned to London where one team overcame a 21 point deficit at halftime to win. Whether it happened on the field or off, Twitter was the one-stop shop for all things #NFL.

In Foxborough, the @ChicagoBears were no match for the Tom Brady and the @Patriots. Brady threw for 5 TD’s, including three to his favorite target, Rob Gronkowski (@RobGronkowski).

In a battle of 5-1 teams, the @AZCardinals beat the @Eagles thanks to a 75-yard TD pass from Carson Palmer to rookie WR John Brown (@RIPJWALK5) with 1:21 left in the game. Palmer threw for 329 yards, while @Eagles QB Nick Foles (@NFoles_9) threw for 411 yards in the defeat. Arizona’s Larry Fitzgerald (@LarryFitzgerald) and Philly’s Jeremy Maclin (@jmac_18) also had big receiving days.

Two more star signal callers – Drew Brees (@DrewBrees) and Aaron Rodgers (@AaronRodgers12) – squared off on @SNFonNBC. Brees (311 yards and three TD’s) and the @Saints proved to be too much at home for the @Packers and Rodgers (411 yards and a TD), winning 44-23.

Another close battle between AFC North rivals went down in Cincinnati, where a late TD run by @Bengals QB Andy Dalton (@AndyDalton14) sealed a 27-24 win for Cincy over the @Ravens.

Despite the win, reports surfaced before game that this may be the last season in Seattle for star running back Marshawn Lynch (@MoneyLynch):

In Tampa Bay, the @Vikings won on a walk-off fumble recovery for a TD in overtime by linebacker Anthony Barr:

Before the game, the Bucs announced on Twitter that they signed defensive tackle Gerald McCoy (@Geraldini93) to a long-term contract extension:

Week eight kicked off early Sunday morning in the States, as fans in the UK were treated to American football at Wembley Stadium in London. Despite getting off to a fast 21-0 lead, the @Atlanta_Falcons couldn’t hold off a second half comeback from the @Lions. Detroit won 22-21 on a game-winning 48-yard field goal by Matt Prater as time expired.

And last night, the @Redskins upset the @DallasCowboys on @ESPNMondayNight 24-20 in OT behind strong play from new starting QB Colt McCoy (@ColtMcCoy):

Here are the top five most-mentioned team accounts on Twitter during week seven of play (Thursday, Oct. 23 through Monday, Oct. 27): 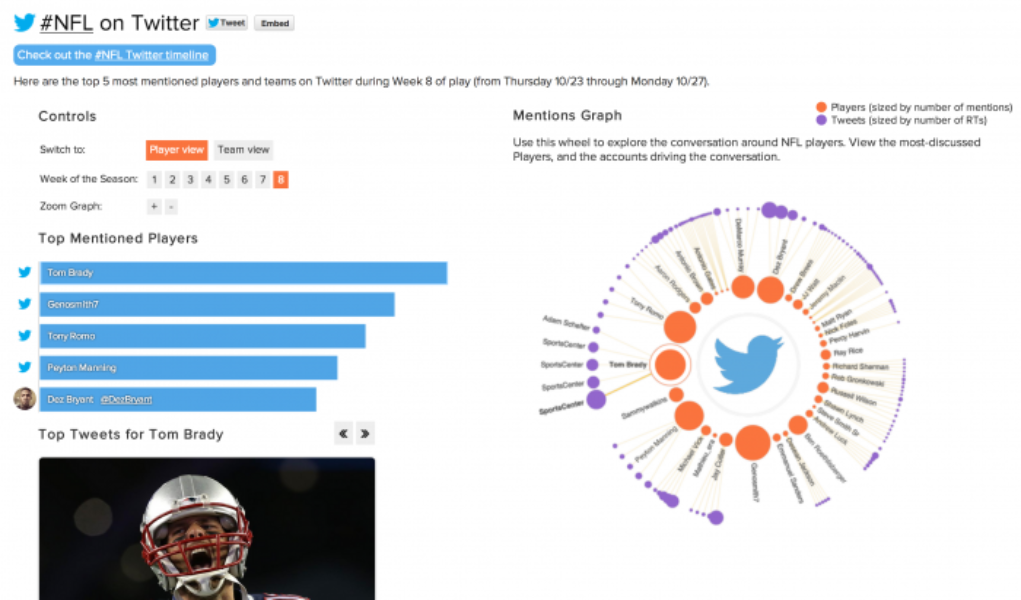 Miss a touchdown from week eight? @NFL has you covered:

And we put together this collection of Tweets from week eight. Enjoy!

Remember to follow the NFL action on Twitter and come back every Tuesday as we recap how the #NFL played out each week. And in case you missed it last week, check out this blog post on our #NFL fan follower map.