Whether they’re heading to grandma’s house or the Caribbean, many travelers will Tweet throughout two of the busiest travel periods of the year in the U.S.: Thanksgiving and Christmas/New Year’s.

According to our recent research with Millward Brown, travelers use Twitter for everything from finding deals to sharing experiences to giving recommendations. The Tweets they see and send make an impact:

This doesn’t surprise Nicholas Mattera, Director of Digital Engagement at the Las Vegas Convention and Visitors Authority (@Vegas). “Our local mantra may be ‘what happens in Vegas, stays in Vegas,’ but consumers are incredibly eager to share their trip planning and in-market experiences on Twitter,” Mattera said.

Read on to learn how your brand can influence travelers via Twitter Ads. Using our latest research, we’ve compiled a list of top traveler insights (and advertising recommendations):

Travelers turn to Twitter at every step, from booking to bragging.

Twitter is a favorite travel companion; about a third of users access Twitter before or after a trip, while 39% use the platform mid-journey. And nearly 20% of users Tweet to share feedback throughout their travel experience. Because it’s used at every stage of the travel process, Twitter can help brands develop strong relationships with consumers.

Twitter is a great place for brands just starting out and looking to generate awareness. Consumers are 44% more likely to learn about a new travel brand on Twitter than on the average social network.

Tip: Increase your follower base by offering content designed to appeal to users at every stage of the travel process.

Travel brands can use Twitter to boost their images.

Users Tweet about all travel experiences, good and bad. Both kinds of Tweets represent an opportunity for brands to enhance their reputations.

Our research shows that 27% of Twitter users share positive travel experiences, creating positive buzz for the brands they mention.

On the other hand, when users share negative experiences, Twitter’s public and conversational nature enables the brands involved to redeem their reputations by responding in a caring way.

Of the 28% of users who said they had engaged a travel brand on Twitter and received a reply, 73% felt more positively about the brand afterward.

Tip: Encourage users to Tweet about positive travel experiences involving your brand. When their Tweets put your brand in a less-than-flattering light, reply quickly and politely.

Tip: Experiment with different types of Tweets, from promotions of exclusive deals to funny stories. Our new ad formats, from Promoted Video to Website Cards, can make your content even more engaging.

Our study with Millward Brown consisted of a 10-minute online questionnaire completed by 1,349 U.S. online consumers age 18 or older who told us they had traveled for business or leisure in the past 12 months. We compared Twitter users to users of other top social networks, and defined a user as someone who logged in to a platform at least once a month.

To learn more about how travel brands are using Twitter, check out these case studies. 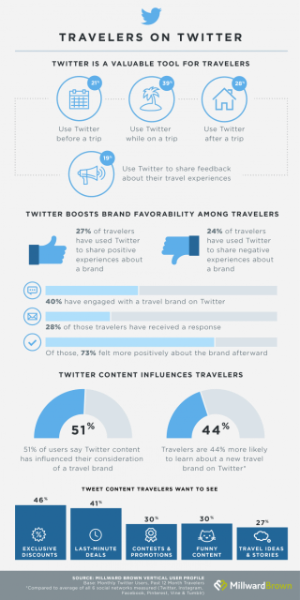