March Madness Live, the web and mobile application streaming the NCAA Men’s Basketball Tournament, has more than just video of the games.

Turner Sports partnered with Mass Relevance and SnappyTV to power the social aspects of the application, including several components exclusive to Twitter.

After clicking on a game from the schedule on the left sidebar, you’ll see the Coke Zero NCAA March Madness Social Arena below the video screen. 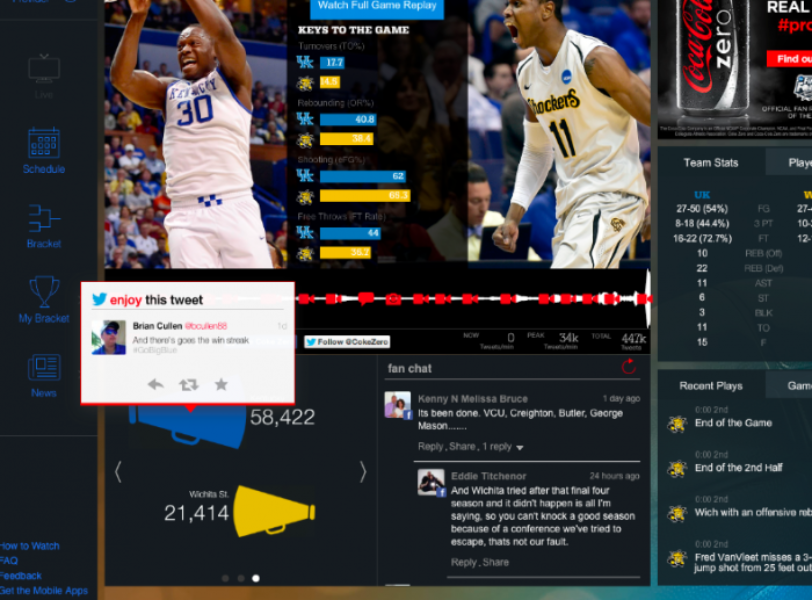 Beneath the video screen is a game timeline, which displays Tweets interspersed with game clips and photos.

On the right side under “fan chat” is a stream of Tweets and other social media content from fans, with data around the number of Tweets per minute and total Tweets.

To the left is a box with three different Twitter options:

On mobile, you can get to the Social Arena by clicking on a game and then the social tab at the top of the screen. Here is how the social arena looks on an iPad:

Join the conversation by tweeting with the hashtag #marchmadness.

“The March Madness Live app integrates the most relevant and compelling social content from Twitter into a single destination for fans,” said Jesse Redniss, Mass Relevance’s Chief Strategy Officer. “The social experience goes beyond simple streams to create dynamic, real-time visualizations that encourage participation and engagement — and brings the March Madness tournament to life in a new way.”