Tonight, the 2014-2015 @NBA season tips off with three games, including two big matchups on @NBAonTNT. While Twitter was your home to the #NBA news all offseason, now turn to Twitter for everything that transpires on and off the court this season.

And in case you missed it, the @NBA announced this summer that their Twitter handle will appear under the “Official Game Ball” wording on all league basketballs:

The best way to stay connected is to follow @NBA for highlights, score updates, live-Tweeting of all games, analysis and behind-the-scenes photos and videos. You can dive into the conversation by using the #NBA and #EverybodyUp hashtags.

You can find all of the @NBA teams on Twitter here. All season long, each team will use a team-specific hashtag (or two) in a majority of their Tweets as a rallying cry for fans. You can find your favorite team’s hashtag in this Vine video from the NBA:

The double header tonight on @NBAonTNT begins with a Texas showdown between the @dallasmavs (#MFFL) and the defending champion San Antonio @spurs (#GoSpursGo).

The Charlotte Hornets (@Hornets) created a lot of buzz today when team owner and hall-of-famer Michael Jordan took over the team’s handle for an #MJTakeover:

While most teams do not have a game tonight, all 30 are ready to begin the season:

This season, the NBA returns to TNT (@NBAonTNT), ESPN (@ESPNNBA; @ESPN; and @Sportscenter) and NBA TV (@NBATV). Make sure to follow Twitter alongside each live broadcast and turn to each handle between games for the latest NBA news.

Tonight, the @Spurs mascot (@SpursCoyote) will take over the @NBAonTNT handle during the second half of the @Spurs vs. @DallasMavs game.

If it were solely decided by a team’s followers on Twitter, here’s how the top @NBA teams would fare this season: 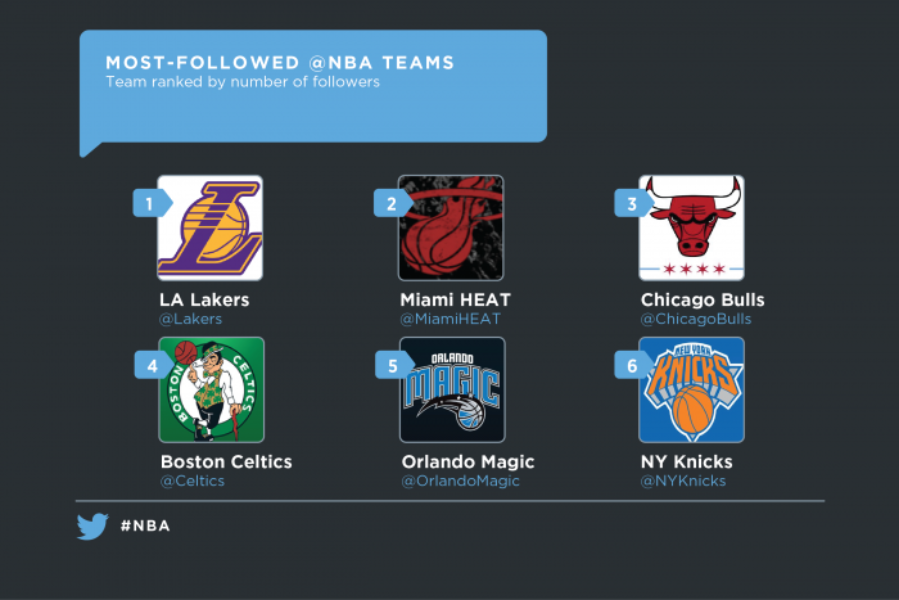 The NBA features a ton of big time stars to follow on Twitter. Here are the most-followed @NBA players: 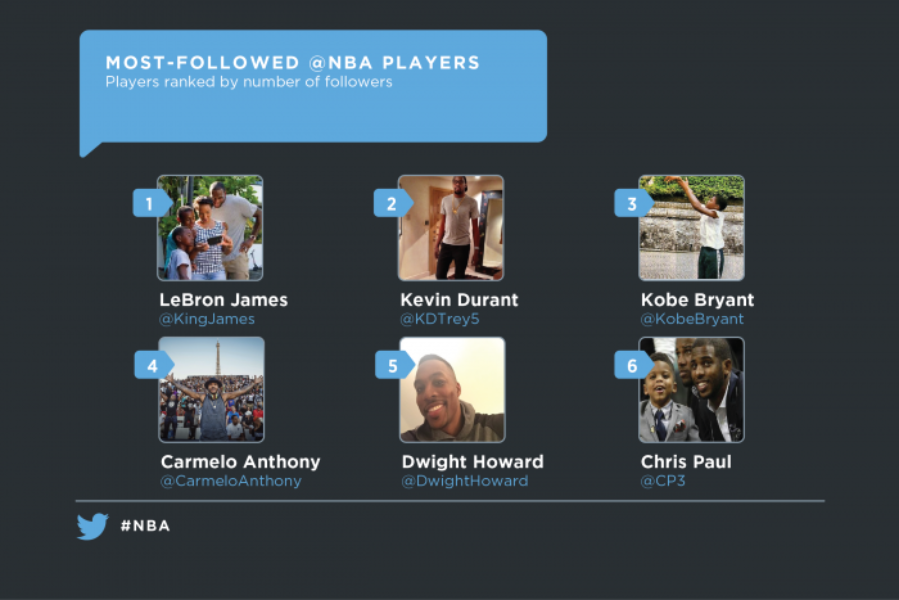 From big free agent signings to significant injuries and the @FIBA World Cup, NBA fans, media outlets and the players themselves turned to Twitter to discuss the NBA this offseason.

LeBron James’ (@KingJames) decision to return home and sign with the Cleveland @Cavs made him and his new team the most discussed player and team on Twitter this offseason.

The @Cavs also drummed up convo in late August when they completed a trade for all-star power forward Kevin Love (@KevinLove):

Unfortunately, a few superstars were discussed a lot on Twitter this offseason due to injuries, such as Paul George (@Yg_Trece ) of the @Pacers and Kevin Durant (@KDTrey5) of the @OKCThunder. George will likely miss the entire season after suffering a horrific leg injury in early August while training with @USABasketball:

Both the @Pacers and George had a message for fans and media on Twitter:

@KDTrey5 recently had surgery for a right foot fracture and will be re-evaluated in six weeks. He let all of his fans on Twitter know he is doing well:

Kobe Bryant (@KobeBryant) of the @Lakers and Derrick Rose (@Drose) of the @Bulls both return from season-ending injuries last season. They join James, George, Durant and Love as the most mentioned @NBA players during the off-season (since July 1): 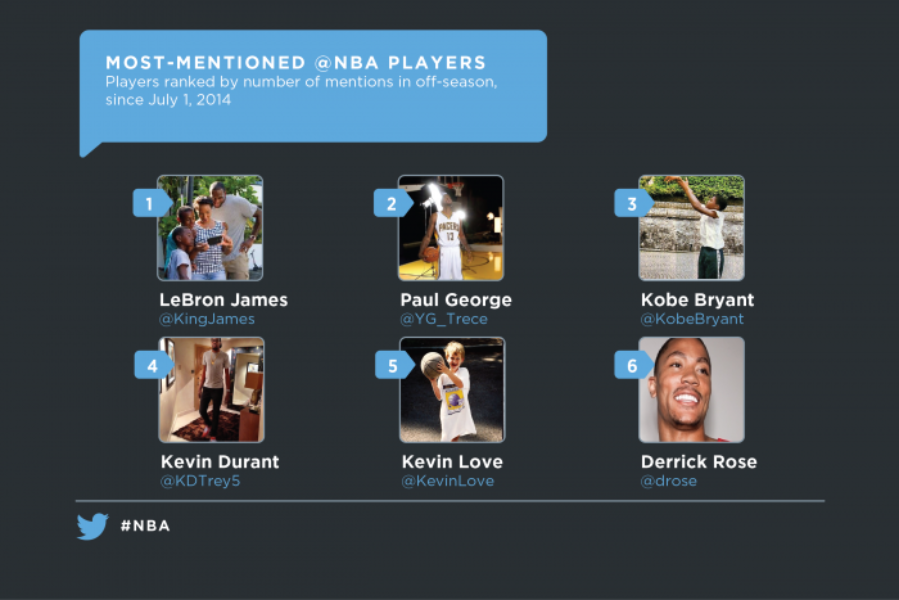 And these were the most mentioned @NBA teams during the off-season (since July 1): 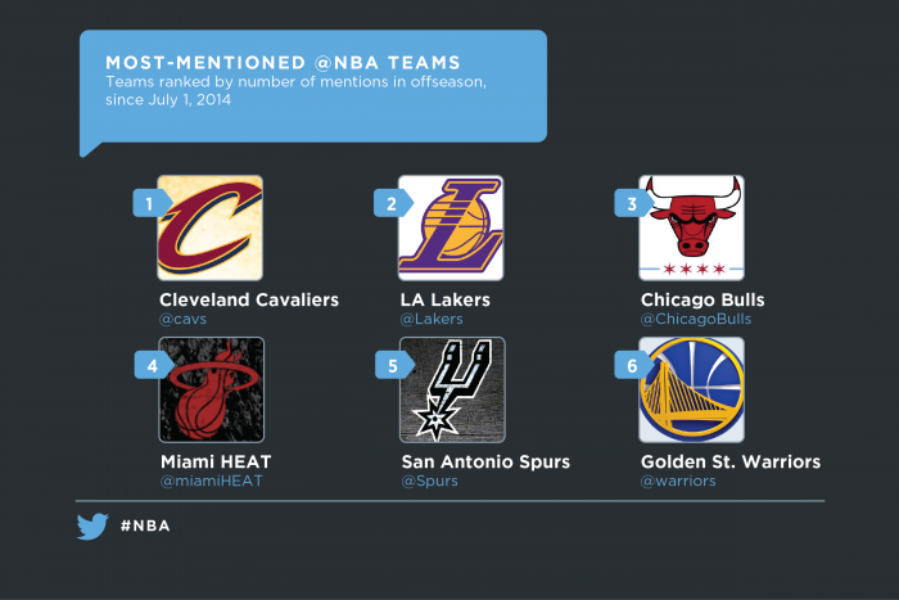 Join the conversation of the 2014-2015 @NBA season, cheer on your favorite @NBA teams and Tweet to @TwitterSports with who you think will be the last @NBA team standing.