For the recent Latin music show, “Premio Lo Nuestro,” @Univision used Twitter to bring fans closer to the action by providing exclusive access to the winners as well as the pre-show, backstage, and the on-camera set itself.

Here are a few of Univision’s best-in-class tactics.

During the pre-show, fans were encouraged to tweet questions to their favorite stars using the hashtag #PremioLoNuestro. Selected Tweets were featured on screen, with questions asked to respective celebrities during the broadcast.

On the carpet, celebrities stopped to snap selfies using the Twitter Mirror, which were tweeted from @PremioLoNuestro.

The hosts also encouraged fans to vote for the best-dressed star by tweeting with #MejorVestido.

In the final moments of the pre-show, carpet host Tony Dandrades (@tdandrades) gave social host Alejandra Espinoza (@AleespinozaTV) and the fans a preview of how celebrities would use the Vine Booth 360 backstage:

The Vine Booth 360 captured winners’ reactions as they left the stage and was part of their post-win backstage press tour. @Univision tweeted out the 6-second clips of the stars showing off their awards.

Nearby, presenters, performers and winners posed for the signature-enabled Twitter Mirror and autographed their photos.

Twitter was a big focus in the social lounge, where Espinoza showed off images from the Vine Booth 360 and Twitter Mirror, as well as fan comments and questions from Twitter and other social media. The stars with the most Twitter mentions during the telecast were featured in a trends visualization.

Here she shares footage of @pitbull posing for the Twitter Mirror and reminds fans to go to Twitter to see more:

Throughout the broadcast, congratulatory Tweets were featured on screen as the winners accepted their awards. This photo shows a Tweet on screen as @MarcAnthony accepts one of his many awards that evening. 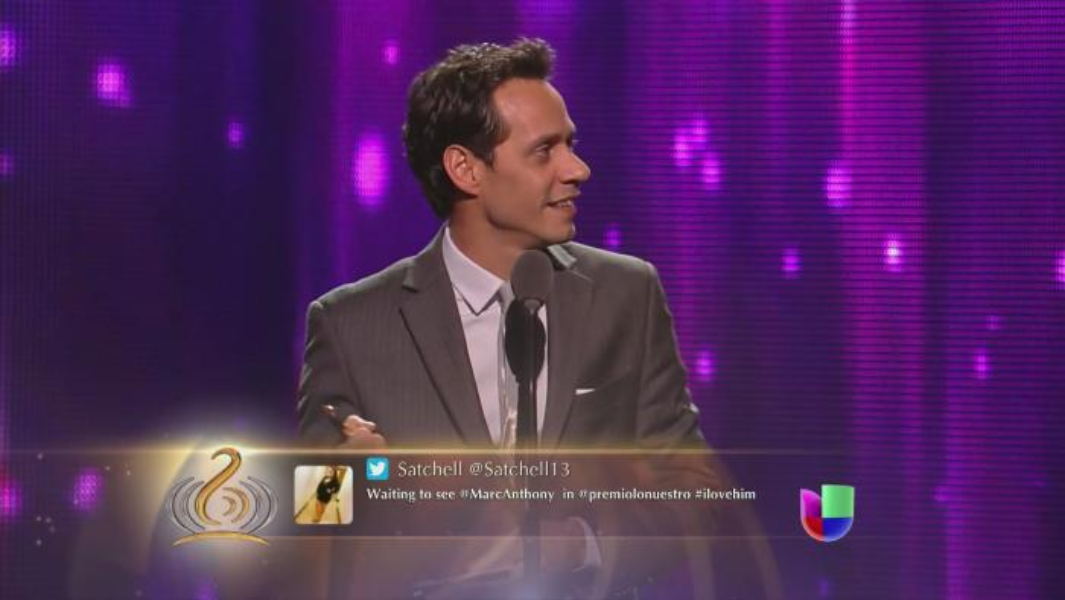 Photo used with permission of @Univision