TV fanatics took to Twitter to join the conversation around all of 2014’s TV moments, and this year, the Nielsen Twitter TV Ratings (NTTR) were on deck to measure the buzz. Today, Nielsen unveils the “Tops of 2014: Social TV,” stacking up the top 10 most social TV series, specials and sports events — as well as the Most Tweeted TV Minute across all three categories — ranked by the size of the audience they reached.

Take a look at which events got a savvy cohort of influential viewers to not just watch TV, but participate in the experience, prompting action, engagement and loyalty, on and off Twitter.

Top 10 series
Stars live-Tweeting and shows creatively integrating hashtags into their programs made Twitter the ultimate TV companion in 2014. On “The Voice,” the #VoiceSave hashtag set the single-episode record for TV series conversation and led to the most-Tweeted series minute of 2014, surpassing even the Super Bowl with 310,000 Tweets at 8:59 p.m. ET alone. On average, AMC’s “The Walking Dead” once again dominated, but other scripted series also managed to cultivate loyal social audiences that returned to watch-and-Tweet week after week.

Top 10 specials
The Oscars topped the specials of the year, no doubt boosted by @TheEllenShow’s “Golden Tweet,” a.k.a. the most-Retweeted Tweet of the year, which also drove the most-Tweeted special event minute of 2014.

Top 10 sports events
Among U.S. Twitter TV audiences (which Nielsen is measuring for these rankings), the Super Bowl XLVIII edged out the 2014 FIFA World Cup as the top single U.S. sports event (along with the most-Tweeted sports event minute), but six World Cup games made it onto the list, securing its position as Twitter’s biggest sports TV story in 2014.

The full breakdown for each category can be found below: 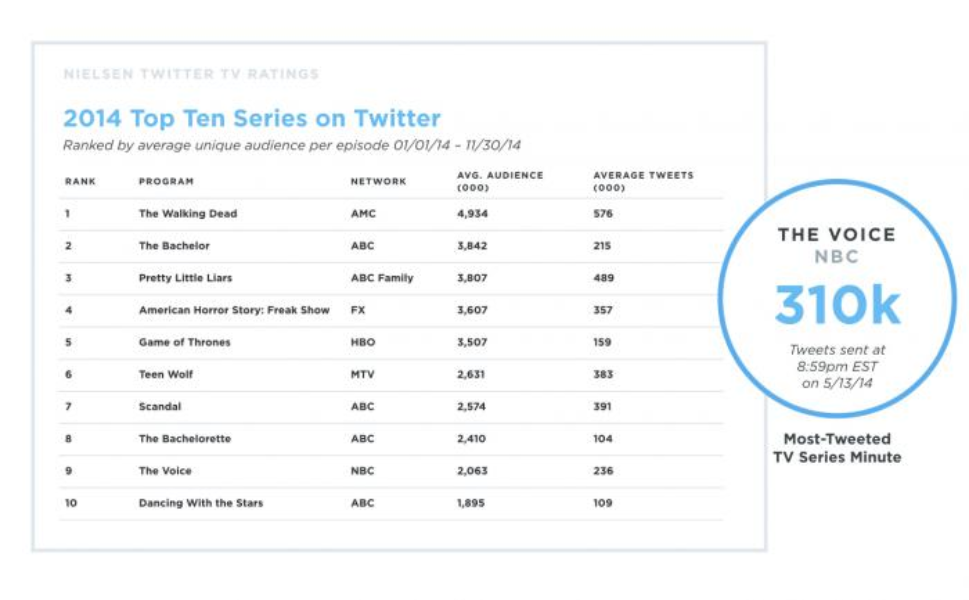 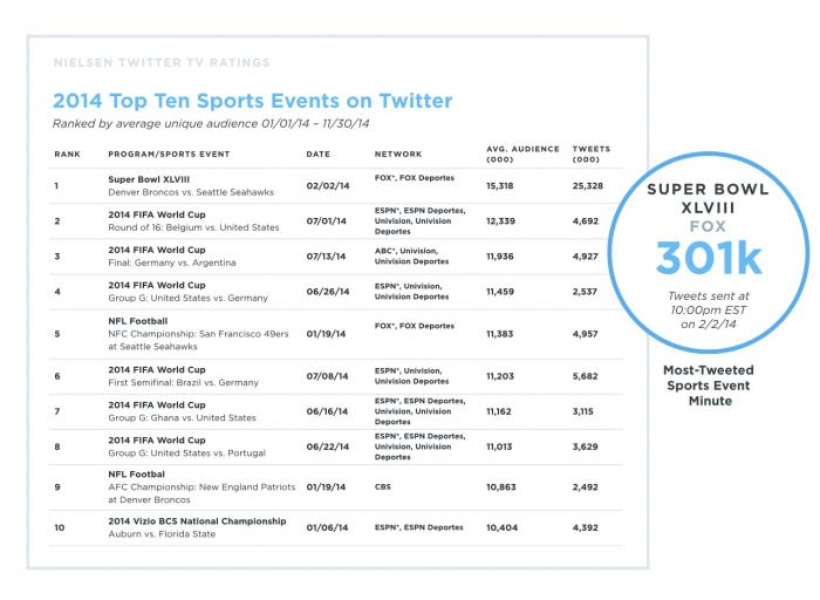 Source: Nielsen. Data from 1/1/2014-11/30/2014. Nielsen Social captures relevant Tweets in the U.S. from three hours before through three hours after broadcast, local time. Unique Audience measures the audience of relevant Tweets ascribed to a program from when the Tweets are sent until the end of the broadcast day at 5am. Sports Events, Series, and Specials include those on Broadcast and National Cable Networks only. Sports Events and Specials are across all day parts and are ranked by Unique Audience for each individual telecast. Series include new/live primetime and late fringe programming only and are ranked by Average Unique Audience across New/Live episodes during the time period. For multicast Sports Events, networks are listed alphabetically and metrics reflect the highest Unique Audience across all airing networks, denoted with an asterisk.