Your front row seat to the #StanleyCup Final

Tonight, the @NYRangers and the @LAKings will take the ice to begin the @NHL#StanleyCup Final. While they compete for one of the most coveted trophies in sports, Twitter will be your behind-the-boards front row seat to all the exciting action on and off the ice.

Follow @NHL, @NYRangers and @LAKings to go inside the locker room, view exclusive photos and videos, and more. And jump into the conversation on Twitter with the official hashtags #StanleyCup and #BecauseItsTheCup.

Whether you are watching the games at the @STAPLESCenter, at Madison Square Garden, at home or at a sports bar, express your allegiance to your favorite team by tweeting photos and Vine videos to @NHL that show you cheering on the Rangers or Kings using the hashtag #MyPlayoffsStory.

Worried about missing #StanleyCup chatter on Twitter? Stay up to date on all of the latest Twitter trends and #StanleyCup Final buzz here at the @NHL’s social hub.

@NYRangers fans can discover and follow their favorite players, such as goalie @HLundqvist30, here.

Add your voice to the Rangers conversation with these hashtags: #NYR, #NYRCupFinal and #WeWantTheCup.

In addition, Rangerstown Hockey House, at 33rd Street and 7th Avenue in New York City, offers fans the chance to show off (and tweet about) their #NYRart skills on a 30-ft canvas right inside the #NYRHockeyHouse. Fans are also encouraged to take photos and tweet them using #NYRPlayoffs for a chance to be featured on the Rangers websites.

And hey, if you happen to be growing a playoff beard, visit the Beard-A-Thon Barber Shop to check the fundraising leaderboard, take photos using #NYRbeards and #hydrochallenge, receive Beard-A-Thon giveaways and get haircuts or beard trims.

If the @LAKings are your team, find forward @MGaborik10 and his teammates on Twitter here.

Jump into the Twitter conversation with hashtags #LAKings and #GoKingsGo.

Visit the Kings’ social hub to see which team is winning the hashtag battle, check out the results of the latest Kings hashtag poll and view all #LAKings-related Tweets. Kings fans will also get closer to the action through a partnership with Giphy that enables Kings GIFs to play in-line.

After the @LAKings defeated the @NHLBlackhawks in the Western Conference Finals, they tweeted their excitement:

And the @NYRangers had a funny response:

That wasn’t the only funny exchange on Twitter between the two teams:

So who’s winning the battle on Twitter? It’s nearly a tie! This graphic below shows which team was discussed the most on Twitter since the #StanleyCup Playoffs began on April 16, 2014: 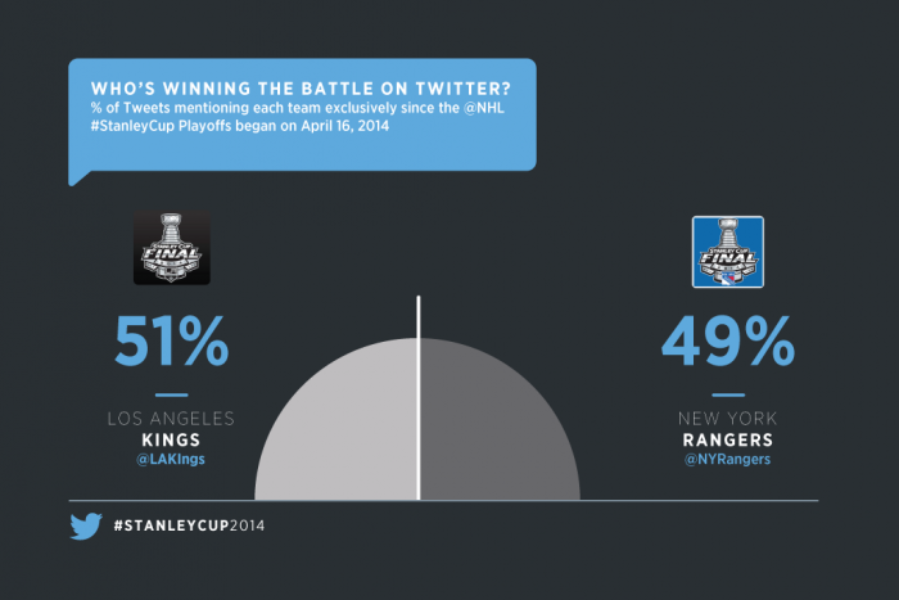 NBC is also asking fans to show their spirit by submitting pictures and video on Twitter using #CelebrateStanley. The best content will be featured on air during game broadcasts and fans can win prizes too. More about this here.

North of the border, follow CBC’s @HockeyNight in Canada for behind-the-scenes photos from the rink, truck and control room. Join the conversation using #HockeyNight and #StanleyCup.

CBC’s Don Cherry (@CoachsCornerCBC) and Ron MacLean (@RonMacleanCBC) will hit the road for their popular Coach’s Corner segment live from New York and Los Angeles throughout the series. And thanks to a partnership with Twitter Amplify, @HockeyNight will also tweet out video highlights of each goal.

RDS (@rdsca) in Canada provides live coverage of the #StanleyCup in French. Fans can join the conversation via #RDS and #FievreLNH.

For the celebrities, a New York-versus-Los Angeles matchup certainly enhances the rivalry.

A few stars rooting for the @LAKings:

The @NYRangers have celeb fans too:

And both city’s @MLB teams got in on the action: