Your front row ticket to the #StanleyCup Playoffs

Tonight, the puck drops for the @NHL#StanleyCup playoffs and Twitter is your all-access pass to all the exciting action on and off the ice.

Get behind the boards, go inside the locker room, view exclusive photos and video, participate in Twitter polls and more by following @NHL throughout the playoffs. You can join and follow the conversation with the official hashtags #StanleyCup and #BecauseItsTheCup.

No matter who you’re rooting for, your favorite team is on Twitter. You can also discover and follow your favorite players by team or on this list of all @NHL players.

Whether you are watching games at home, at a sports bar or at the arena, express your passion by tweeting Vine videos to @NHL that show you cheering on your team during the playoffs using the hashtag #MyPlayoffsStory.

@NHLonNBCSports is also asking fans to show their spirit on Twitter by submitting pictures and video on Twitter using #CelebrateStanley. The best content will be featured on air during game broadcasts and fans can win prizes too. Learn more.

In addition, be on the lookout out for guest tweeters throughout the playoffs on @NHLonNBCSports. You’ll also want to follow @NHLNetwork, @NBCSN, @NBCSports and @ProHockeyTalk for game analysis, score updates and more.

Will the defending champion @NHLBlackhawks repeat in 2014? If it’s up to fan chatter on Twitter, the @penguins will take home the most well-known championship trophy in sports. Based on Twitter mentions since the season began on October 1, this scenario shows which #StanleyCup Playoff team would win the cup. 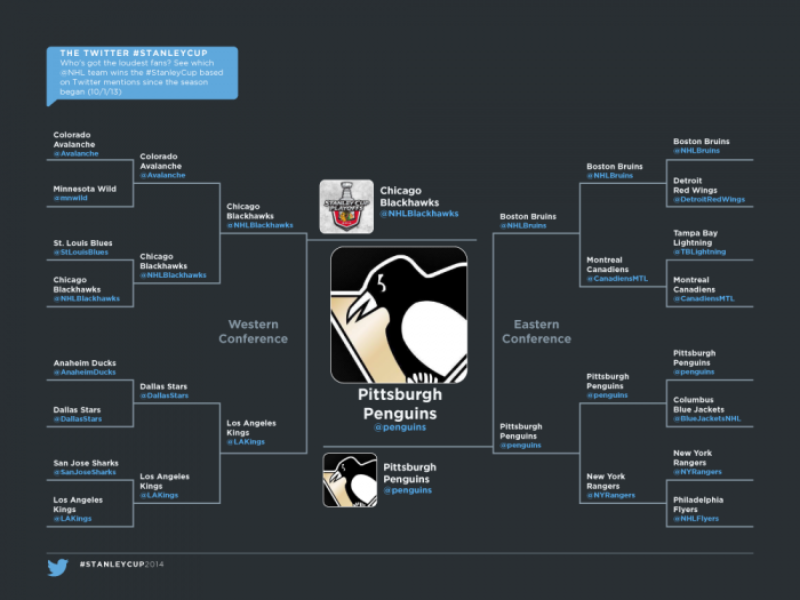 And remember, when an @NHL playoff game goes into overtime, play the #bucciovertimechallenge, from @SportsCenter anchor John Buccigross (@Buccigross). Simply tweet the name of the one player from each team who you think will score the sudden-death goal for a chance to win prizes.