A look back at this year’s Comic-Con

This past weekend, while droves of die-hard fans filled the San Diego Convention Center for Comic-Con, they simultaneously lit up Twitter streams around the world with their #SDCC experiences. For those who braved the lines (and some of the costumes), Twitter was the place to share unforgettable moments, while fans watching from afar jumped on Twitter to get minute-by-minute updates on their favorite stars, TV shows and movies. Here’s how it all looked from our vantage point.

The multitude of celebrity panels, talks and sessions played out on Twitter all week. Here’s a visualization of the conversation: 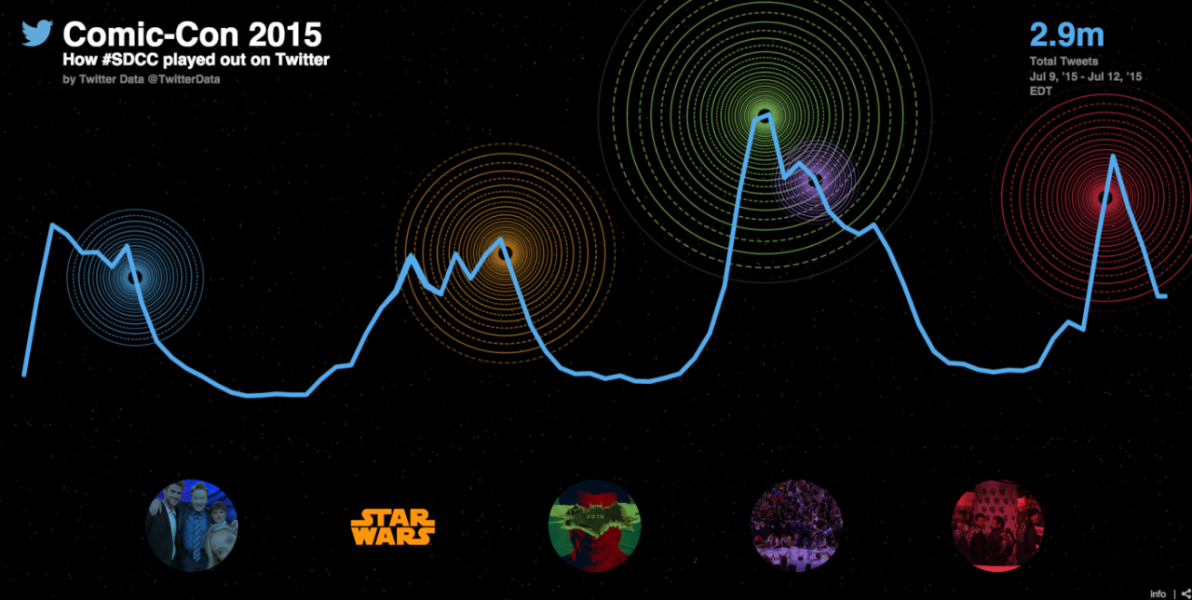 The throngs of Star Wars fans were especially lucky. The introduction of three new Twitter emojis (#Saber, #KyloRen and #Phasma) gave them a fun new way to Tweet out their passion for the saga, which rolled out via @StarWars, @bad_robot and @lovegwendoline. Here’s a collection of Tweets showcasing the Star Wars discussion all weekend.

As the TV networks jostled for attention, TV fans feasted on the best of #SDCC through Twitter, Vine and Periscope to get an inside look at on-site activations, panel highlights and candid Tweets from the stars.

Shows like @TheMuppetsABC found creative ways to share a day in the life at Comic-con through the voices of their star characters:

Persicope brought Comic-Con to “Entertainment Tonight” through @ZacharyLevi and other stars from the ET suite:

And NBC’s Periscope broadcast with Access Hollywood brought everyone close to the action:

We’ll leave you with this collection that showcases how fangirls and fanboys reacted on Twitter to news about their beloved shows, movies and characters.