Cristiano Ronaldo (@Cristiano) was crowned world footballer of the year tonight at the 2014 Ballon d’Or ceremony in Zurich.

The point at which Ronaldo’s name was announced was the most-Tweeted about moment of the evening, with conversation peaking at 143K Tweets per minute. Ronaldo was also the most-talked about player on the night, beating Lionel Messi and Manuel Neuer (@Manuel_Neuer) to that honor too. 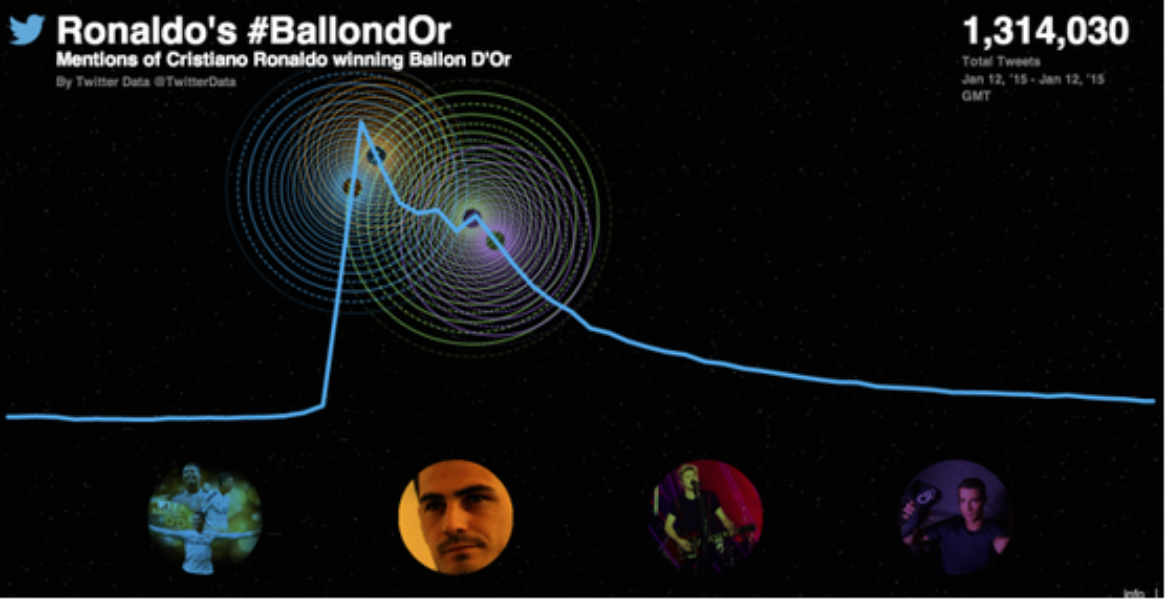 Click on the image to interact with it. This graphic visualises mentions specifically about Ronaldo during the event window

The accolade for women’s player of the year was awarded to German international, Nadine Kessler, seeing off competition from USA Striker Abby Wambach (@AbbyWambach) and five-time Brazilian winner, Marta.

The FIFA Puskás Award, presented to the player who scored the best goal of 2014, went to James Rodriguez (@jamesdrodriguez) for his strike for Colombia during the #WorldCup.

And after an incredible year which saw him lead Germany to World Cup glory in Brazil, Joachim Loew was voted coach of the year.

Ralf Kellermann, manager of Wolfsburg, won the women’s coach of the year.

If Ballon d’Or success was determined by conversation on Twitter in 2014 (instead of on-field statistics), there were more than 54 million Tweets related to Lionel Messi in 2014, making him the most talked-about contender on the shortlist. Ballon d’Or winner Cristiano Ronaldo wasn’t far behind with over 40 million mentions, whilst Manuel Neuer was trailing on 6.3 million Tweets.

James Rodriguez may have won goal of the year, but the goal that created the largest spike in conversation on Twitter out of the contenders came from Robin Van Persie (@Persie_Official). Football fans grabbed for their devices to Tweet their amazement during the World Cup when Van Persie’s scored a looping header for Holland against Spain.

Throughout 2014 fans used Twitter to discuss the triumphs and shortcomings of the highest profile coaches in world football. In a year in which he led Real Madrid (@realmadrid) to their record 10th Champions League title, Carlo Ancelotti (@MrAncelotti) was the most-mentioned coach on Twitter.

Diego Simeone (@Simeone) came in second place, after making his club, Atletico Madrid (@Atleti), Spanish champions. And despite winning 2014 coach of the year, Joachim Loew was the least discussed of the three.

Football fans around the world followed tonight’s action on Twitter, and were treated to some exclusive shots from backstage at the ceremony, courtesy of a Twitter Mirror:

All of the winners at the 2014 Ballon d’Or ceremony were as follows: