While the @MLB season officially began last night with the @Cardinals 3-0 win over the @Cubs, today’s #OpeningDay is a reminder that baseball fans around the world will turn to Twitter to follow their favorite teams and players and chatter about the news on and off the diamond in real time. But no matter where their allegiances lie, all fans can count on Twitter for nonstop baseball action.

On Twitter, the 2015 @MLB season started over a month ago as players reported to Spring Training.

Players all over the league are ready and excited for a new season.

Players aren’t the only ones anxious for the season to begin. Teams took to Twitter for an inspirational message to kick off 2015:

To join all of today’s baseball conversation, use the @MLB’s official hashtag for the season opener: #OpeningDay. And today, each home team will feature a Twitter Mirror for players and coaches prior to hitting the diamond. Last night, the Chicago Cubs kicked off the action:

To get the official perspective from Major League Baseball and its partners, look no further than these accounts covering both #OpeningDay and the entire season:

On the broadcast front, both ESPN (@BBTN) and FOX (@MLBONFOX) have big plans of their own.

For #OpeningDay, @BBTN will be offering on-field coverage before each game, including batting-practice, talent and fan photos, and various in-stadium festivities. Here’s one from last night’s game:

Meanwhile, @MLBONFOX welcomed back fans to baseball, and providing updates across the league all day long.

We were curious which teams Twitter users predicted to win big this season during spring training. Instead of just looking at who generated the most overall conversation, we specifically measured which teams were talked about in the context of winning. So we analyzed how many Tweets used a team-related keyword alongside a ‘winning’ related keyword during the month of March and then proceeded head-to-head style to arrive at who fans on Twitter think will win each of MLB’s six divisions: 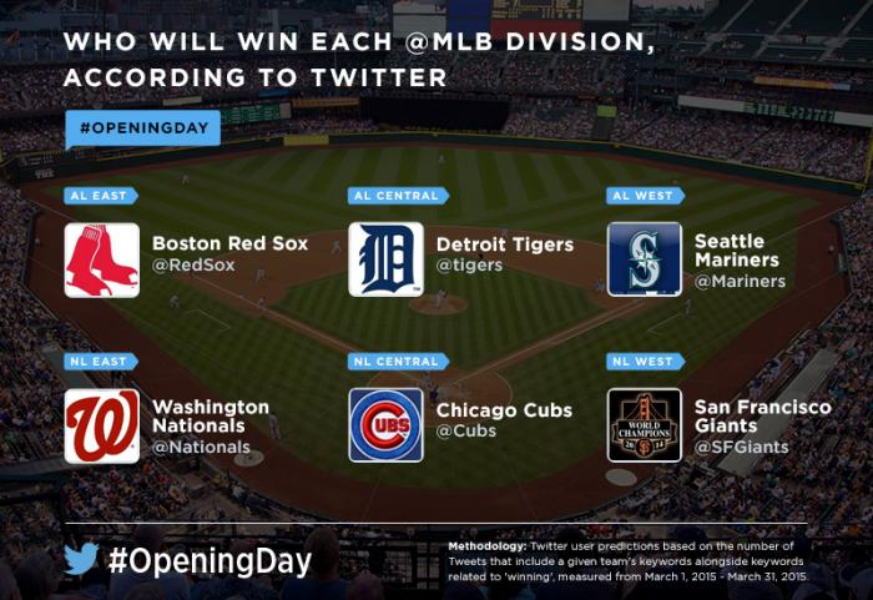 Surprised at the results? Tweet your predictions all season long and enjoy the baseball conversation around #OpeningDay and beyond, only on Twitter.