This Sunday, the Formula 1 season gets under way at the Australian Grand Prix, #AusGP, and Twitter is the place to come for exclusive updates and real-time data from the track.

For the first time, you’ll be able to see video clips on Twitter via the @F1 account, starting with CEO Bernie Ecclestone’s favourite iconic moment to celebrate #65YearsOfF1:

These clips will be complemented by infographics, showcasing key stats about the Grand Prix:

And @F1 will also be taking the pulse of race fans around key questions and talking points like “who will be #F1Champion?”:

Voting on that hashtag was incredibly close on the first day of the Melbourne practice, with Lewis Hamilton (@LewisHamilton) and Nico Rosberg (@nico_rosberg) neck and neck in the vote – as they were on the track for so much of last year.

Meanwhile, the teams are using Twitter to bring their fans closer to the action than ever before. Both Red Bull (@redbullracing) and Mercedes (@MercedesAMGF1) are showcasing fan Tweets alongside their data dashboards in the team garages to send messages of inspiration to their drivers:

They then celebrated by becoming the first @F1 team to pass one million followers by making their Twitter account private for a few hours, in order to thank their followers with exclusive content, including this message from boss Toto Wolff:

Elsewhere, Ferrari have added their Twitter account (@ScuderiaFerrari) to their car to help drive deeper engagement with supporters:

The drivers have been getting in on the Twitter conversation too. Defending champion Lewis Hamilton Tweeted a photo of himself arriving in Melbourne in style:

While Daniel Ricciardo (@danielricciardo) has been preparing for this moment for months:

The local hero has been making the most of his time back in his home country:

Ahead of the #AusGP, these are the most-followed drivers on Twitter: 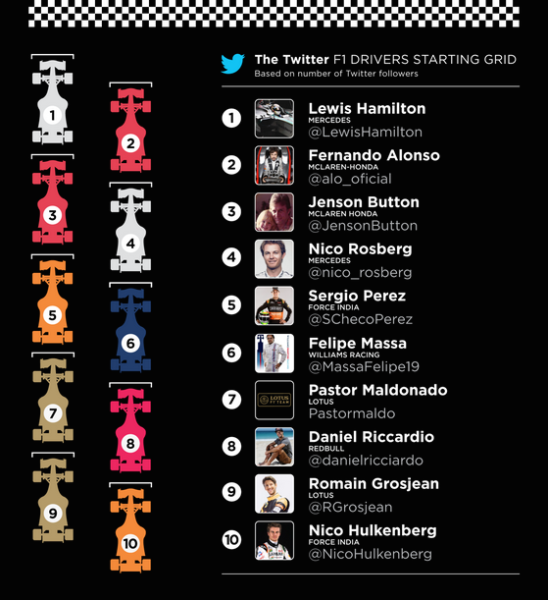 And here is a starting grid for all 10 teams, based on their Twitter following: 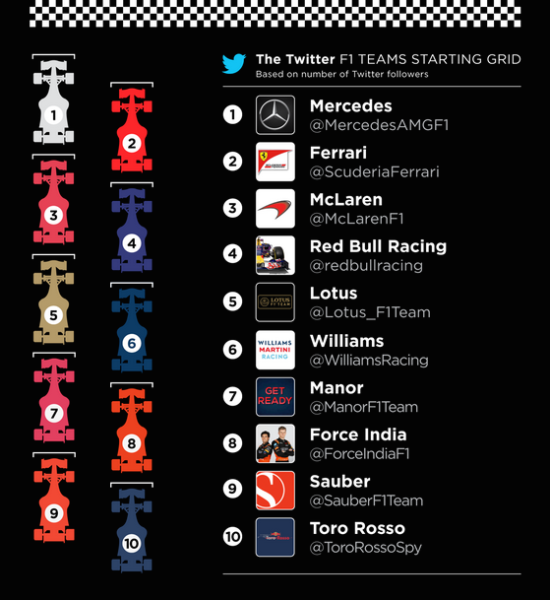 Anticipation has been building at the track all week:

And now it’s at fever pitch, with the race scheduled to start at 0500 GMT on Sunday.

With one single Tweet you could win a Mercedes garage tour. To be in the running, Tweet a photo with a C’MON DAN card or the #AusGP giant hashtag:

@AusGrandPrix are also giving fans the opportunity to ask drivers questions. Keep an eye out for regular Twitter Q&As. The first one off the rank was Jenson Button (@JensonButton):

It all starts this weekend in Melbourne. Follow @AusGrandPrix for all the official action, and get involved with all your fellow @F1 fans by using #AusGP in your Tweets.