At first, lightning and solar energy appear to have little to do with Twitter. But yesterday at #CannesLions, Twitter’s Chris Moody took the stage to explain that lightning, the sun and certain types of Twitter conversation exhibit remarkably similar energy patterns. These parallel power curves, he said, have big implications for marketers.

We met with Moody, Twitter’s vice president of data strategy, after his talk to learn more about what he calls the #PowerOfNow.

Moody said that when he and his team examine Twitter data, they notice two major types of moments: cultural moments and everyday moments.

Everyday moments
In contrast, everyday moments, such as those that drive users to Tweet about fashion or coffee, show up on Twitter as predictable, steady pulses. In other words, the everyday moment energy pattern looks similar to that of the sun.

Everyday moments: on average, there are 14M Tweets about coffee per month. #CannesLions #PowerOfNow pic.twitter.com/d6CJcPtjmX

Moody encourages brands to consider geographic and cultural differences when looking at everyday moment data on Twitter. As an example, he noted that coffee-related conversation on Twitter peaks at different times in the U.S. and Turkey. Understanding this type of nuance can enable brands on Twitter to get their message to the right people at the right moment.

In the US, coffee Tweets peak at 9am. In Turkey, the peak is around 2pm. #CannesLions #PowerOfNow pic.twitter.com/93vTqAS3zM

While many brands successfully engage their Twitter audiences during “lightning strike” moments, some are missing out on an equally valuable opportunity: connecting with users during the ebb and flow of their daily lives. And users are eager for this brand interaction.

On average, brands on Twitter respond to users just 2% of the time. #CannesLions #PowerOfNow

Moody underscored the point that the volume and predictability of everyday moments make them a key time for advertisers to connect with consumers using the graph below. It shows how a jump in brand mentions on Twitter produced by a Super Bowl ad is dwarfed by the overall volume of brand mentions Tweeted every day. 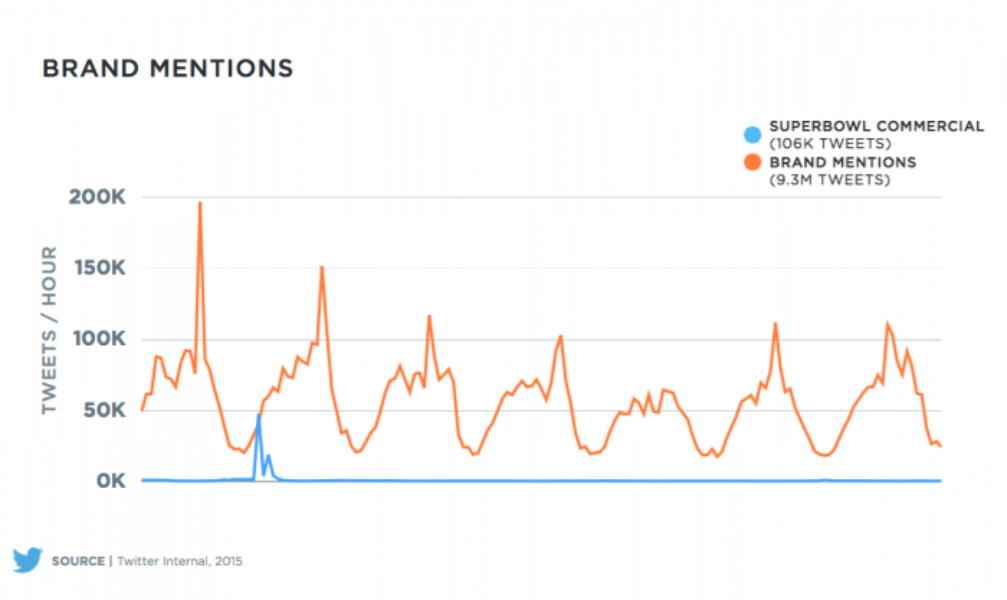 How brands can harness the #PowerOfNow
When later asked what his advice is for brands interested in using Twitter data to reach consumers effectively during cultural and everyday moments, Moody recommended getting specific. “It’s far more efficient and easier to get quick results if you start off by saying, ‘we have this question we’re trying to answer. How can Twitter data help us answer it?’”

For inspiring examples of how brands are engaging Twitter users on an everyday basis, check out the @AmericanExpress #EveryDayMoments campaign and the @Clorox #HassleOff Vine campaign.