The summary (in 140 characters or less)
Twitter #CreativeFavorites: @StGermainDrinks and @POSSIBLE artfully craft a beautiful, fleeting peep show on Periscope

The brand
ST-GERMAIN is a French liqueur made from fresh, hand-selected elderflowers that blossom in Europe once a year during a four-to-six-week period in the late spring. Each eight-sided bottle is individually numbered and marked with the vintage year based on the annual seasonal elderflower harvest — a revolutionary concept in the liqueur category that’s more traditionally employed for wine.

Inspiration from our exquisite #elderflower guides the signature taste of #StGermainDrinks. pic.twitter.com/1a3Kr2zDrZ

The agency
A global agency with over 1,200 employees, POSSIBLE offers clients digital strategy, performance marketing, and creative design. “We focus on creating work that is beautiful but that also delivers a measurable difference — either on the culture or on the bottom line of our client,” says Danielle Trivisonno Hawley, CCO Americas at @POSSIBLE.

In January, the agency began working with Bacardi, the world’s largest privately held spirits company which acquired ST-GERMAIN in 2013. “Bacardi wanted to tap into POSSIBLE’s digital prowess to push innovation, be disruptive and drive the next evolution of what marketing looks like together,” says Bacardi Limited CEO Mike Dolan.

ST-GERMAIN was heralded by The New York Times as “one of the most influential cocktail components introduced in the last decade” resulting in high awareness among the bartender community. However, Bacardi knew there was the opportunity to increase awareness among consumers for both the brand and as a cocktail itself. POSSIBLE was tasked with helping Bacardi transcend the hand-crafted liqueur’s status as the darling of mixologists and highlighting its versatility to consumers by showing them how and when to drink ST-GERMAIN on its own.

“In order to engage our core audience, we needed a disruptive digital medium to immerse them in the brand and give them the opportunity to interact with and be a part of the story,” adds Beauchamp. “To be truly disruptive, we created a totally new occasion — the Vive The Daylife drinking occasion — and we were seeking the perfect platform to bring that to life.”

“We’re asking people to slow down and savor the moment with ST-GERMAIN but it’s not about putting down technology completely. We actually want to encourage people to use technology to appreciate the beauty in life and capture those moments,” says Brandon Geary Global Chief Strategy Officer at POSSIBLE. “As our strategy unfolded, Periscope hit that sweet spot of being perfectly suited to our creative vision in a uniquely compelling way.”

The creative
Inspired by the brand equity of past ST-GERMAIN campaigns centered around vintage black and white postcards from the 1920s and 1930s of Parisienne women in their boudoir, the female-led team at POSSIBLE decided to use Periscope to reinvent the concept of a peep show. Over the course of a day, ST-GERMAIN would share a series of beautiful live streams on Periscope that were by definition fleeting, reinforcing the brand message to slow down and savor beautiful moments before they are gone forever.

“It’s important to highlight that this campaign was conceived and executed by an all-female team — from Michelle at Bacardi to the lead agency creatives to the director [Floria Sigismondi] to the production team to the star [Hannah Simone]. We all felt a responsibility to create a brand experience that was provocative and entertaining but evoked a sense of empowerment. The nuance for us was that the woman being watched was fully in control of what people could see. It could never feel gratuitous,” says Nicole Michels McDonagh, Associate Creative Director at POSSIBLE.

The creatives at POSSIBLE collaborated with award-winning film director Floria Sigismondi to balance this sense of enticing voyeurism with empowered sensuality. Over a two-month period, they dove into Periscope to understand the possibilities of the platform and refined different techniques to shoot footage on an iPhone 6. 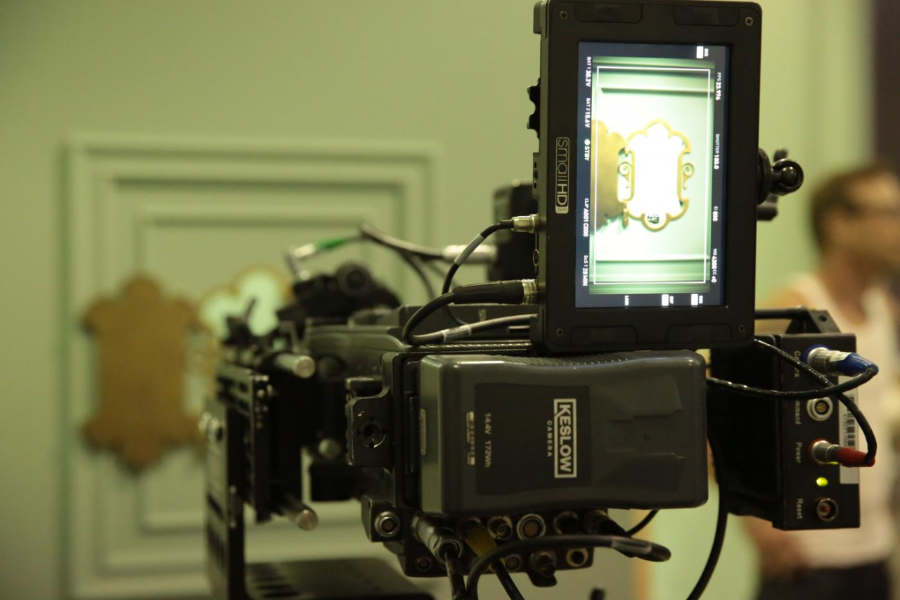 Used with permission from ST-GERMAIN

“Every one of us from Bacardi to Floria to our star, who is one of the top actresses on television, took a huge risk. Periscope was a five-month old platform. And of course, it’s LIVE. We didn’t know how people would react. But that danger, that creative risk, that pushing the boundaries was exactly what was so exciting and inspiring to all of us,” says Michels McDonagh.

The team ultimately choreographed six live streams for the ST-GERMAIN Peep Show. Before the live shoot, everyone came together over the course of two days for technical and dress rehearsals.

“This was really a case of practice makes perfect. We had to work incredibly hard to craft artistic quality that delivered on the brand image,” says Trivisonno Hawley. “We also had to be prepared from a community management standpoint for real-time feedback. We created a ‘war room’ with a team that was monitoring the conversation and ready to respond quickly.”

Used with permission by ST-GERMAIN

The POSSIBLE team was poised to handle anything from answering questions about how to download the Periscope app to addressing backlash on the peepshow concept. But the team was not prepared for one recurring comment from viewers: that the streams couldn’t possibly be happening live. POSSIBLE quickly realized a simple way to prove the experience was happening live was to have the actress react to comments from viewers in her performance.

“Hannah had an earpiece in that was a direct line into the director so by the second stream we’d have her incorporate requests from commenters on the fly. She would wink and a viewer would have that experience of feeling like they had an intimate exchange, like I can’t believe she winked at me. That connection with a live performance was even more powerful than we could have anticipated,” says Michels McDonagh.

Over the course of the day-long experience, the war room team also learned how to optimize teaser content creation to drive as many viewers to view the Periscope live streams as well as click on the replay links for 24 hours. They would capture photos and little video vignettes on set to tease the Periscope experience and create rich Tweets to drive viewership.

POSSIBLE also partnered with Hannah and lifestyle influencers like Whitney Port to extend reach with target audiences who were likely to tune in.

Tomorrow, I’m at the St-Germain Peep Show with @HannahSimone. Follow @StGermainDrinks on #Periscope to watch. pic.twitter.com/H5X42KrJLT

The ST-GERMAIN Peep Show exceeded awareness expectations, driving a peak Promoted Tweet engagement rate on Twitter of 26%. The campaign also delivered a spike in brand mentions on Twitter and the sentiment of those mentions was overwhelmingly positive.

“As agencies, we have a responsibility to lead when there is new technology. For this campaign, there was no better medium than Periscope. The fleeting nature of the platform was perfectly aligned to our ST-GERMAIN strategy and what we were trying to communicate. We could share a fleeting experience with the world and at the same time create intimacy with individual viewers. It’s truly got the potential to be a new art form in digital film that lets you craft the story in real time with your viewers,” says Michels McDonagh.

POSSIBLE promises the Periscope peep show is just the tip of the creative iceberg they have planned for the ST-GERMAIN campaign across digital. Next up is Biketender, a campaign which will allow Bon Vivants to order a bicycle-delivered hand-crafted St-Germain Cocktail right to their door. Running in two markets this summer, Biketender will allow the audience to slow down and savor the fleeting moments.

A masterpiece in the making. RT if you’re mixing a cocktail today. #StGermainDrinks pic.twitter.com/YP0gsPcM1V

And we’re ready to savor whatever the team mixes up next.