By
Thursday, 28 May 2015
Link copied successfully

The Eurovision Song Contest is the biggest song competition in the world, featuring acts from 39 countries from Europe (and, for one year only, Australia!) and inspiring one of the largest, most entertaining TV conversations on Twitter.

There were 2.3 billion impressions of Tweets about #Eurovision on Twitter (logged-in and logged-out) and syndicated across the web. It is the big moments that get people reaching for their devices. The three moments during the final that generated the highest spikes in conversation, measured by Tweets per minute, were:

This heat map shows the global conversation on Twitter during the event: 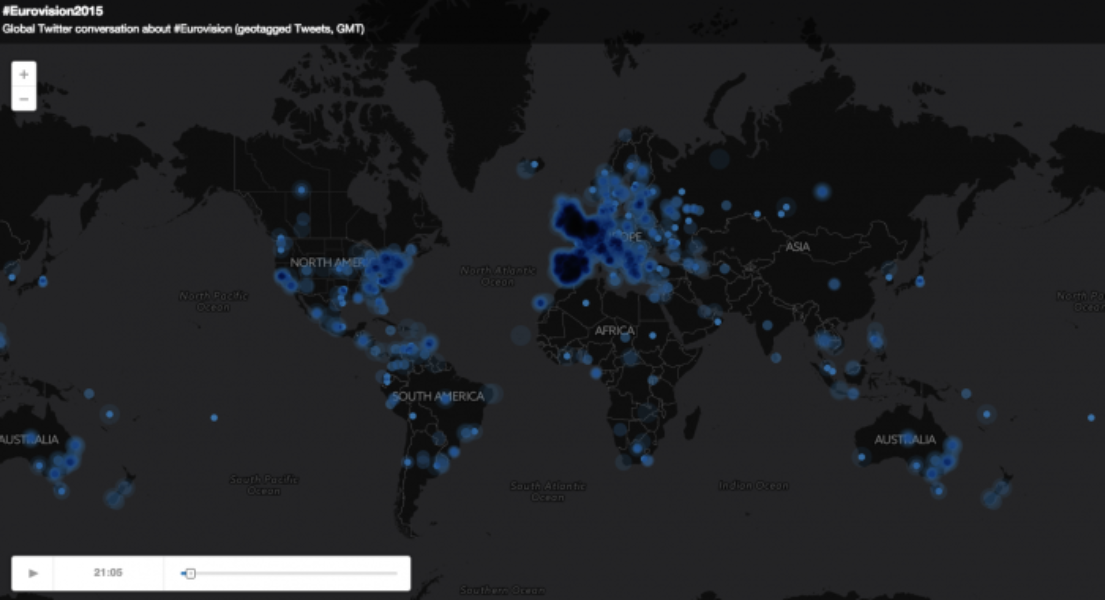 Naturally must-Tweet TV, this year the competition organisers built on on the event’s popularity by maximising fans involvement in the experience through Twitter, in a number of ways.

Twitter and Eurovision teamed up to create a complimentary #Eurovision experience for the audience on their second screens, using hashtags on screen for each competing country that activated special Eurovision hashflags on Twitter: 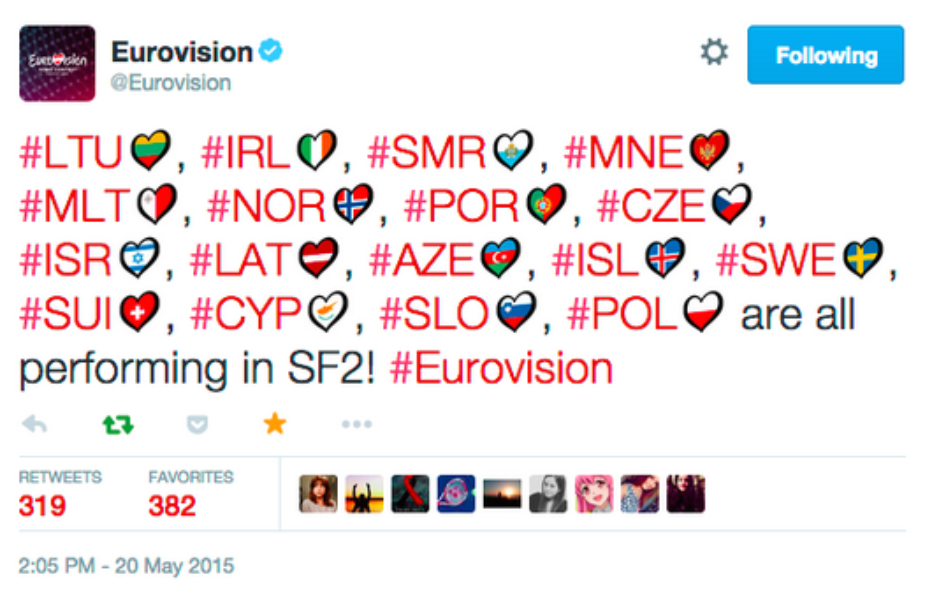 The three-letter country code hashtags on screen for each performance brought simplicity to the second screen experience for audiences looking to share their support for the countries, while the hashflags highlighted these conversations with delightful graphics.

The most Tweeted-about nations during Saturday’s grand final were:

Eurovision 2015 was packed with huge moments that the audience rushed to share on Twitter. Knowing that the best thing a TV show can do is give people the Tweet that they wish they’d Tweeted, Eurovision clipped the big moments and posted them out to Twitter seconds after they happened using Twitter’s live-clipping tool, @SnappyTV:

Since the dawn of the smartphone, Eurovision Song Contests have seen the artists Tweet their adventures in the competition: sharing the stories and, of course, the selfies:

Knowing each artist had their own journey’s story to Tweet, Eurovision gave each act a unique Twitter Mirror to take with them around host city Vienna. From the red carpet introductions to the green room of the grand final, the hopeful acts captured the moments and shared them immediately with the fans on Twitter:

Big Tweets of the night

Eurovision announced that there were more than six million Tweets about the show on the night. Naturally, certain Tweets stood out and were Retweeted and favorited thousands of times.

A helpful Tweet for those new to Eurovision from @jumalaska used four images to capture 60 years of the competition:

@Callummccrae1’s wry comment on the inclusion of Australia in a European song contest inspired over 8,000 Retweets:

While support for Spain’s @Edurnity by her boyfriend @D_DeGea was much appreciated.

@KitKatSpain’s offer of a free chocolate bar for everyone who Retweeted (if @Edurnity finished in the top 15) received plenty of attention:

In the end, Eurovision is a competition, and after a close-run in the voting, Sweden’s @manszelmerlow was crowned the winner of Eurovision 2015:

And after all the excitement of the singing and Tweeting, Mans was clearly dog-tired: