The puck drops on the @NHL’s second season tonight, with the league’s 16 best teams vying to be the last one standing – the one worthy of hoisting the Stanley Cup. And Twitter will be your ticket to the real-time conversation, on and off the ice.

The regular season is over, and after a season of coast-to-coast beauties, laser one-timers and devastating hits, several teams including the @Senators and @penguins needed the full 82 games to punch their ticket and slide into the playoffs, while others stood atop the standings throughout the majority of the season. Either way, all 16 teams have one goal.

Here’s our guide on how to follow the Stanley Cup playoffs.

You can be there for every deke, toe drag, glove save and chirp throughout the playoffs, getting access to exclusive photos and behind-the-scenes videos.

Follow @NHL  and use #StanleyCup as the primary hashtag throughout the entire playoffs to join the conversation, connect with other fans and ensure you never miss a moment of action on the ice. Follow game conversation by following series-specific hashtags.

During the final week of the regular season, a few teams seemed to test the blood pressure of their fans, with the @Senators, @penguins and @NHLJets all leaving it to the last minute to clinch their spots in the postseason.

You can find and follow all @NHL teams here. As they interact with fans (and sometimes their opponents), the 16 playoff teams will be vital to follow.

Teams have had some friendly banter on Twitter ahead of the series:

Over the past three months, which players had fans buzzing the most? The graphic below features the top three most-mentioned Western and Eastern Conference players over the period Jan. 12 through April 13. You’ll notice that Evander Kane (@evanderkane_9), who was traded from the Jets to the Sabres in February, generated a lot of Twitter chatter. (We kept him in the West since he was on the Jets when we began looking at the data.) 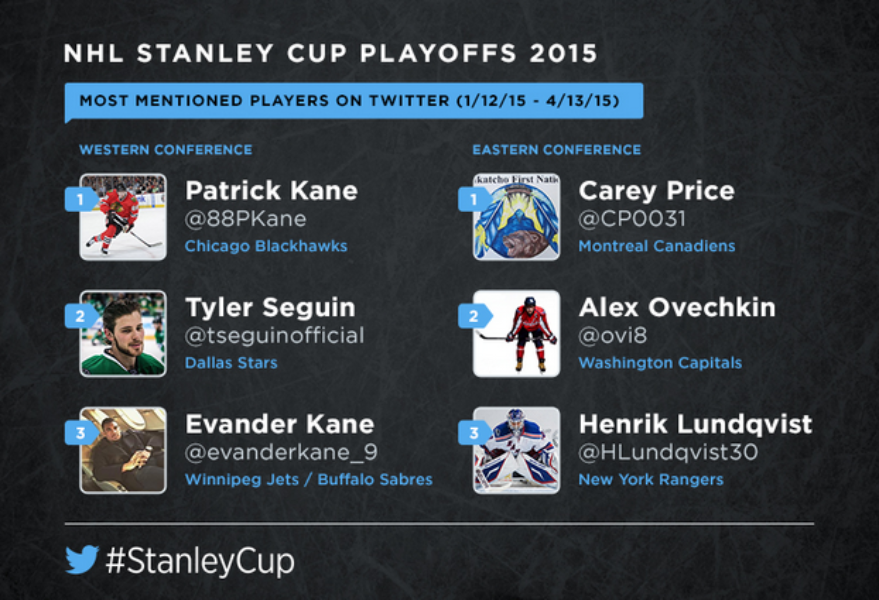 North of the border, this year’s playoffs are extra special. The only Canadian team to make the playoffs last year was the Montreal Canadiens (@CanadiensMTL), but this season, five of seven Canadian franchises qualified. Be sure to follow @Sportsnet  for near-real-time video highlights of the biggest moments, behind-the-scenes Periscope views and a Stanley Cup “moments” contest. You can also get the entire broadcast schedule by Tweeting #Schedule to @Sportsnet.

In the U.S., fans can follow broadcast partner @NHLonNBCSports to stay connected to the latest news. You’ll also want to follow @NHLNetwork, @NBCSN, @NBCSports and @ProHockeyTalk for game analysis, score updates and more.

Specifically, NBC Sports will ask fans to submit themed photos via Twitter using #StanleyCup, and will showcase some of the best during the broadcast. Throughout the playoffs, NBC will celebrate team toughness by highlighting gritty performances, asking fans to nominate their favorite players and performances by using #StanleyCupTough. Find more here at the NHL on NBC’s All-Access social hub.

Over the past three months, we were curious which teams Twitter users predicted would be drinking champagne out of Lord Stanley’s Cup once June rolls around. But instead of just looking at who generated the most overall conversation, we specifically measured which teams were talked about in the context of winning. So we analyzed how many Tweets used a team-related keyword alongside a ‘winning’ related keyword from Jan. 12 to April 13, then proceeded head-to-head style to arrive at who fans on Twitter think will win each series and take home the coveted Stanley Cup: 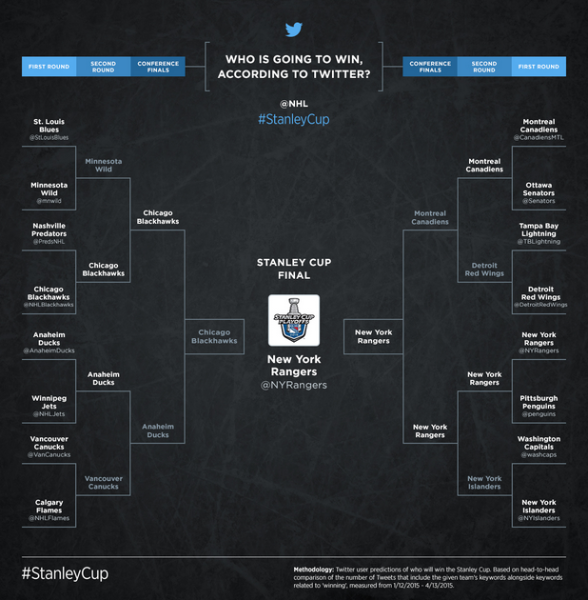 Surprised the @NYRangers will avenge last season’s Stanley Cup Final loss, according to Twitter? Tweet your predictions all playoffs long and remember to follow @NHL, your favorite teams and players, and @TwitterSports to stay up to date on all of the hockey conversation, only on Twitter.