Goals galore: how the #NHLAllStar game played out on Twitter

As hockey’s biggest stars took to the ice in Columbus, Ohio and scored a record-setting 29 goals during the annual #NHLAllStar game, fans followed all the action on and off the ice on Twitter.

And wow, what a game it was:

@Sportsnet in Canada and @NHLonNBCSports in the U.S. served as the official broadcast partners and they took fans behind all of the action on Twitter too.

These were the top three most-Tweeted moments during the #NHLAllStar game:

These were the most-mentioned players during the game:

And below are the top 10 most-Retweeted Tweets from the game:

Before Sunday’s big game, the annual skills competition dominated the conversation on Twitter. The @NHL used #NHLBreakawayFanVote to let fans decide who they’d like to see compete in the @Honda Breakaway Challenge. Fans were able to vote directly within a Tweet: 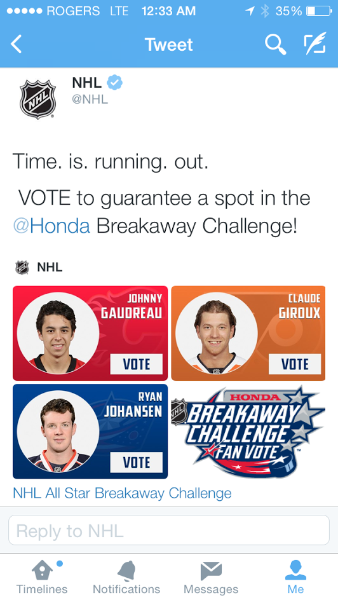 During the Breakaway Challenge itself, fans could vote for who should be deemed the winner by using a hashtag for their favourite player:

In the end, Ryan Johansen took home the title:

After missing out at the Draft, Ovechkin’s next chance at winning new wheels was being the All-Star Game MVP, which he tweeted about and to which @Honda responded:

Turns out his intentions were altruistic all along. When @Honda learned that he wanted to donate the car to the Washington Ice Dogs (@SHWIceDogs), even though he wasn’t named MVP, they still gave him a new car which he promptly donated to the good cause:

This year’s NHL All-Star Weekend festivities also featured more video on Twitter than ever before, with fans getting access to alternate and unique camera angles:

St. Louis goalie Brian Elliott (@KidElls1) took the art of the selfie to a whole new on-ice level during the skills competition, which became the most-Retweeted Tweet during the all-star weekend festivities:

He wasn’t the only one getting in on the selfie act:

In Canada, official NHL broadcaster @Sportsnet took fans behind the scenes with a Twitter Mirror. The result was some fantastic content, see them all here:

To make sure you don’t miss any of the action during the rest of the NHL regular season and throughout the playoffs, remember to follow @NHL, @Sportsnet, @NHLonNBCSports, @TwitterSports and @TwitterSportsCA.