In July, we introduced event targeting to give advertisers the ability to reach audiences interested in live events, quickly and easily. The following week, political advertisers across the U.S. benefitted from this feature during the massive conversation that took place around the first Republican presidential #GOPdebate.

Tweets about last night’s two GOP debates were viewed over 1.1 billion times on Twitter and across the web.

With event targeting, advertisers can easily tap into live moments on Twitter with just a few clicks, delivering the right message to the people who are most passionate about the event as it unfolds in real-time. 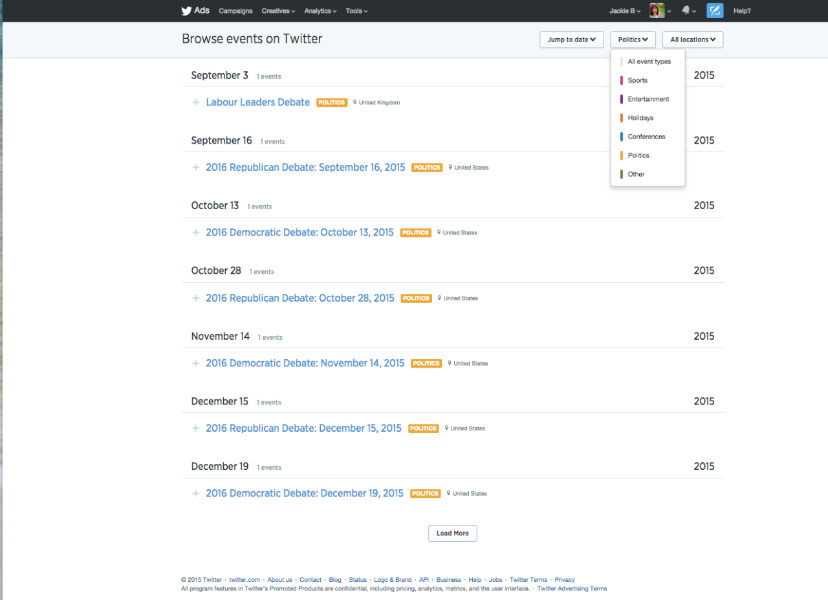 As the second debate approaches, here are a few best practices for engaging the right Twitter users in real time, as noted by top advertisers during the last debate.

Use video to drive second-screen engagement on mobile

With Promoted Video, the Conservative Solutions PAC (@cspac) extended the reach of a key debate moment for Senator Marco Rubio.

“Thirty five percent of all screen time involves simultaneous usage of TV and a digital device,” says Amanda Bloom, Media Director at Bask Digital Media. “We know that it spikes much higher than that during live events like debates. Twitter is the go-to for people looking for as-it happens news. We leveraged Twitter’s Event Targeting option, which allowed us to make sure our message was being delivered in real time to the audience watching and talking about the debate on their second screen. The first debate was just the beginning. Twitter Ads is an excellent platform for CSPAC’s persuasion and acquisition goals.”

The 4th Amendment is what we fought the revolution over. #StandWithRand https://t.co/4d12L39PeI

“We’re excited about how Twitter’s event targeting is going to help campaigns capitalize on critical debate moments,” says Chase Campbell, VP of Client Strategy at Harris Media. “It’s powerful when an undecided primary voter can be persuaded by something that a candidate said on stage, and then locked into supporting them when they convert on a Twitter ad they see right after that. Layering event targeting on with remarketing and donor files will be key to debate fundraising on Twitter.”

Governor Chris Christie (@ChrisChristie) connected a video clip of his stance on terrorism to his campaign hashtag #TellingItLikeItIs.

I will make no apologies for protecting the safety of the American people. #TellingItLikeItIs #GOPDebate https://t.co/Gvgrt7EeTu

“We were able to leverage event targeting and strategic audiences on Twitter to effectively distribute our content to highly engaged users,” says Jon Massengale, COO at Upstream Communications. “The key users we reached with our video content helped amplify our message to others at a much higher rate than what we normally see with targeting provided by other platforms.”

Rick Perry’s Texas gained jobs while the rest of the country lost jobs in the Obama economy. #Perry2016 #GOPDebate pic.twitter.com/VMOpqnGqny

“Twitter’s event based targeting has allowed us to easily narrow down the audience of potential respondents, to those who actually participate in the process,” says Jack Barger, Managing Partner of Operations at The Tiber Group. “This saves us dollars, time and energy when mobilizing our target audience(s). Combine this with re-targeting and first-party audiences on Twitter, and we are reaching those most likely to make a difference in this cycle.”

Extend reach by connecting with the right Twitter users

Believe Again GOP PAC (@BelieveAgainGOP) targeted voters in specific states, urging them to share and spread Governor Bobby Jindal’s message, and also targeted journalists in those states to ensure their message reached those covering the debate.

There’s only one candidate EARNING IT IN IOWA, Bobby Jindal. Watch and Retweet: https://t.co/6MfSY27oC9

“Twitter allowed us to leverage a real-time conversation about the first GOP debate with event, keyword, Tailored Audiences, and TV targeting as part of our multi-pronged approach to reaching our audience,” says Jaime Bowers, Director of Digital Advertising at OnMessage Inc. “Believe Again focused our efforts to promote our latest TV ad to political journalists and caucus goers in Iowa by capitalizing on key debate moments for Governor Jindal.”

Senator Bernie Sanders (@BernieSanders), a Democratic presidential candidate, shared a behind-the-scenes photo of him watching the debate that Twitter users couldn’t see elsewhere, and invited them to follow the debate with him using #DebateWithBernie.

Tonight, follow the debates live with me and use the hashtag #DebateWithBernie to join the conversation. pic.twitter.com/Mh9XrzWeA3

“We wanted to make sure the major issues facing our country were being discussed online if not on stage at the debate,” says Kenneth Pennington, Digital Director, Bernie 2016. “Twitter is a good way for us to talk about all the issues the candidates didn’t touch during the first GOP debate: income and wealth inequality, climate change, and student debt.”

The Partnership for A New American Economy (@renewoureconomy) used a Website Card to highlight content about polling and drive politically engaged visitors to its site. 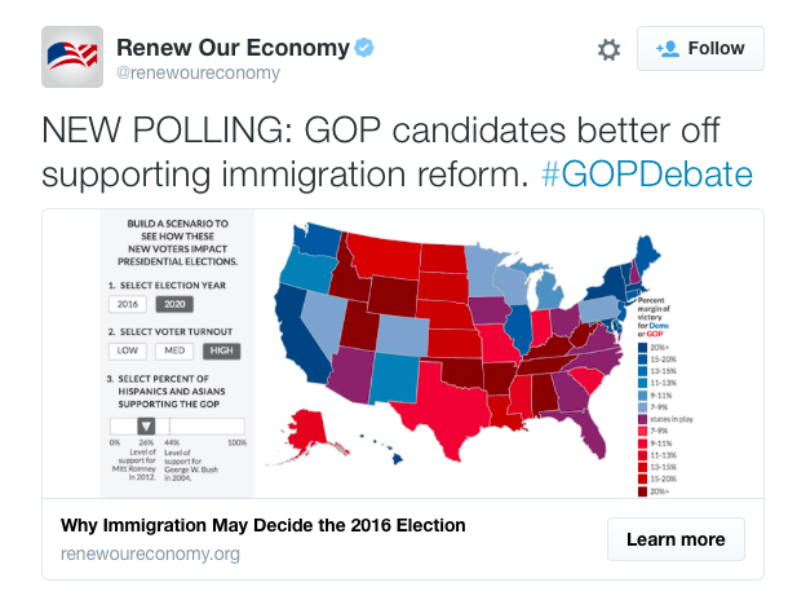 “As a group trying to promote a conversation about the economic case for immigration reform, aligning with #GOPdebate on Twitter was a great way for us to get our facts out to a wide audience that’s engaged in the primary debate” says Jeremy Robbins, Executive Director, Partnership for a New American Economy.

Lead with a simple and clear call to action

RT and WATCH: A nuclear Iran is a threat to our national security #GOPDebate http://t.co/ajvMb48lB5 https://t.co/MVIgubsTIZ

“We wanted to insert our foreign policy messaging into the debate conversations on Twitter occurring in real time and event targeting allowed us to achieve this goal,” says Eric Frenchman, Chief Marketing Officer at Connell Donatelli.

Highlight your message to a relevant audience at the right moment

The American Petroleum Institute (@EnergyTomorrow) positioned its take on oil exports to a debate audience that was leaning in.