Suicide is often preventable. For those at risk, talking about it is an important first step to recovery. In Singapore, suicide remains a taboo — but not talking about it only adds to the distress of those at risk as they feel further trapped by the effects of depression and life circumstances.

World Suicide Prevention Day (WSPD) takes place on 10 September every year. Our organization, SOS (Samaritans of Singapore) is the only suicide prevention centre in Singapore. We are a secular non-profit organisation offering 24-hour confidential emotional support to people who are thinking about suicide, affected by suicide, or have difficulty coping during a crisis.

For WSPD 2015, we partnered with TBWA\Singapore in designing a campaign to combat suicide with ongoing community outreach and awareness efforts. The campaign message was simple: to encourage people to start a conversation, ask about and simply be there for one another. 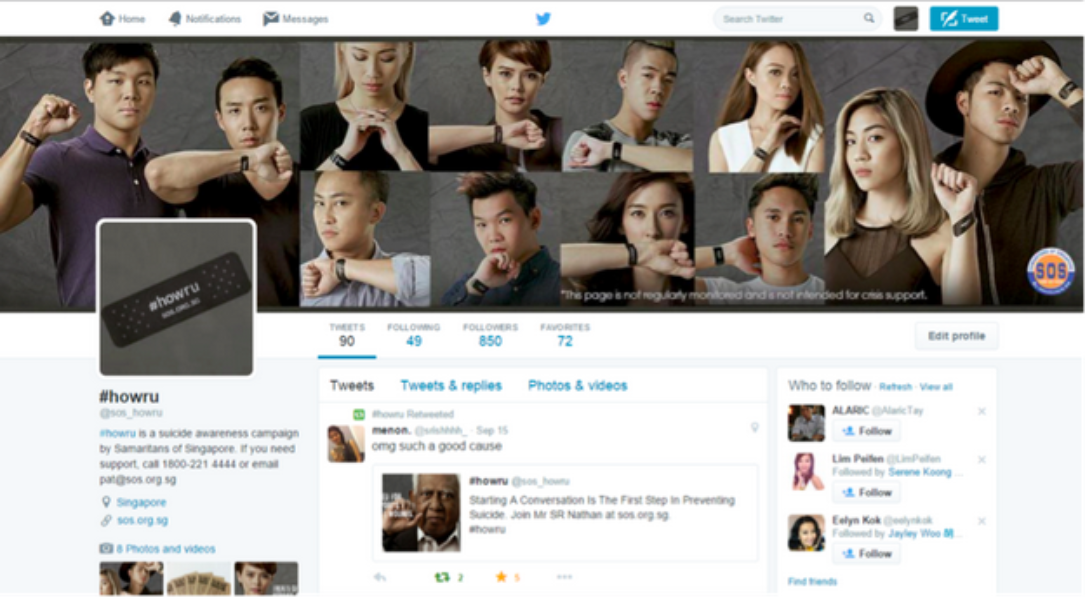 Over the campaign period, 50,000 plasters were distributed to the public, who were encouraged to wear it, snap a photo, and share that image with the world using the hashtag #howru to show support.

Through this Twitter For Good initiative, the eight-day campaign reached more than 1.75 million people and logged close to 125,000 online interactions. The campaign exploded into the social media space, drawing further support from even more celebrities. And it was featured on media channels such as the TODAY paper, ChannelNews Asia, and Channel 8.

SOS would like to thank Twitter Singapore for their team’s spontaneous gesture of support in making this one of our most successful campaigns to date. For more information on SOS, visit sos.org.sg.