This past week, auto manufacturers used Twitter and Periscope to transport people from around the world to the 2015 Los Angeles Auto Show Press & Trade Days.

While some auto enthusiasts still rely on traditional media for coverage of auto show news, many are now eager to participate in the excitement of show reveals in real time. When brands share these live moments on the Twitter platform, their messages reach further, create more buzz, and foster more personal engagement with consumers.

Over the course of the #LAAutoShow’s two Press & Trade Days, more than a dozen manufacturers were slated to unveil 41 models — concept, new, or updated cars. Nearly every one amplified their announcements, and captivated consumers, by sharing images, videos, and live broadcasts on our platforms.

According to our data partner Wayin.com, people sent 37,265 Tweets about the #LAAutoShow during the 48-hour period, discussing everything from Fiat’s Stormtrooper car to Volvo’s autonomous vehicles to Hyundai’s disco-themed after-party.

The #LAAutoShow kicks off the US auto show season. For auto marketers interested in extending their reach via Twitter and Periscope at future events, here’s a list of best practices.

Invite auto enthusiasts to participate in your big moment with a live Periscope broadcast. Start by letting your Twitter followers know what and when you’ll be broadcasting a day in advance, as @Ford does here.

Follow us on #Periscope and tune in at 1PM ET tomorrow to see the new 2017 #Ford #Escape. #FordLAAS #LAAutoShow pic.twitter.com/8Sm4fYMBgH

Then, prompt people to tune in five minutes before you begin with an eye-catching reminder, per this Tweet from Porsche:

Our live broadcast of the new Cayman GT4 Clubsport on Periscope from LA Auto Show will start in 5 minutes. pic.twitter.com/kbI9961qI7

Here’s a glimpse of an auto show Periscope from Mercedes-Benz (@MBUSA). The brand broadcast three Periscopes throughout the #LAAutoShow, including a conversation between its CEO, Steve Cannon, and influencer Guy Kawasaki. Altogether, the Periscopes drew nearly 2,500 viewers. 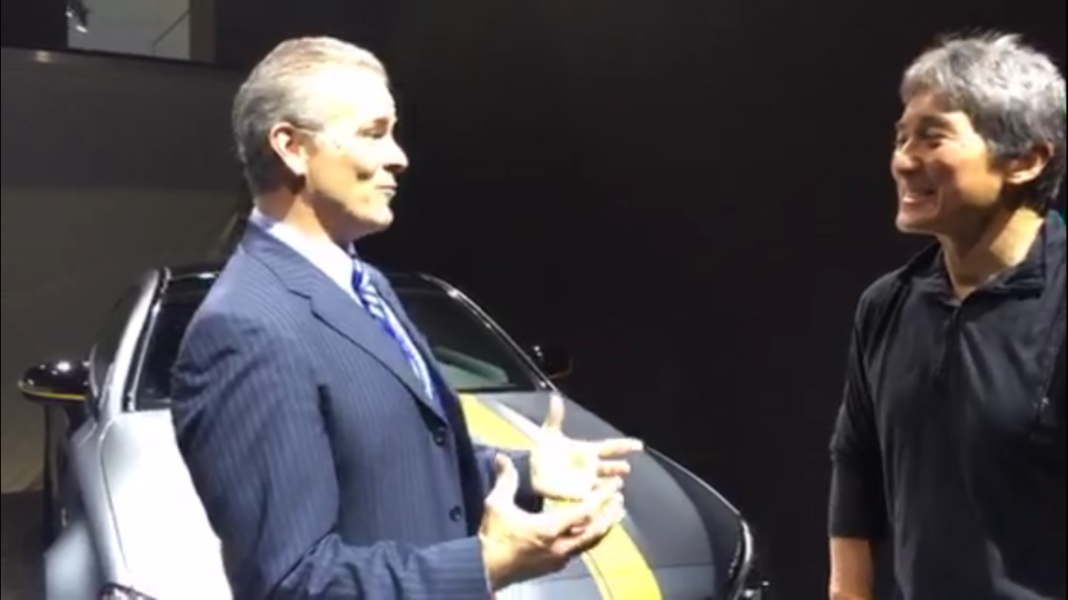 Image used with permission from Mercedes-Benz.

A simple-yet-striking image is a good way to showcase your new model(s). Don’t forget to join the auto show conversation by adding the official hashtag to your Tweet copy, as @JaguarUSA and @Cadillac do here.

#FPACE: the first-ever SUV from Jaguar has arrived. Get up close and personal at the #LAAutoShow. pic.twitter.com/I5bBv4UQOO

It’s Day 2 at #LAAutoShow. Don’t miss any of the #Cadillac news. #LAAS pic.twitter.com/s9phrVV08I

3. Show all angles with gallery Tweets.

You can share up to four images in a multi-image gallery Tweet — a great way to show off multiple models or views of vehicles. Here are examples from @NissanUSA, @FIATUSA, and @Kia.

This auto show-goer sent her own gallery Tweet featuring @VW, which reminds us of another tip: encourage influencers among the attendees to Tweet about your brand to generate extra buzz.

4. Grab attention with a GIF.

Not many auto brands used GIFs at this year’s #LAAutoShow, so @scion’s clever way of appealing to consumers in search of trunk space really stood out.

#ScioniM’s 20.8 cu.ft. of cargo room can help you show up to the basketball court prepared. https://t.co/UpQgeKrPm9 pic.twitter.com/HU3hLMbqDB

Have a captivating video clip? Upload it to Twitter and share it during an event to give consumers more information. If you need extra motivation, consider this: research shows that Twitter users exposed to branded videos have 28% higher purchase intent than the online norm.

Watch these videos from @Hyundai, @Audi, @volvocarsus, and @MazdaUSA for inspiration.

A daily driver that doesn’t skimp on performance—the #AudiR8 is ready to bare its racing soul at the #LAAutoShow. https://t.co/GKPlsc2AaC

Twitter can provide more than live reach and engagement. With Twitter’s native Lead Generation Cards, marketers can capture customers’ information at the moment they’re most interested. Below, @AlfaRomeoUSA uses a Lead Generation Card to collect hand-raisers who want to learn more about their just-revealed Giulia.

For more ideas on how to connect with customers and enthusiasts on Twitter during an auto show, please reach out to your Twitter account team. We look forward to seeing your Tweets and Periscope broadcasts from Detroit at the North American International Auto Show (#NAIAS) in January!