Last week, Twitter lit up with thousands of #CannesLions Tweets as creative agencies, brands and festivalgoers sent pithy quotes, shared red carpet moments and Periscoped from the industry’s hottest parties. Here’s how the biggest advertising event of the year played out on our platform. 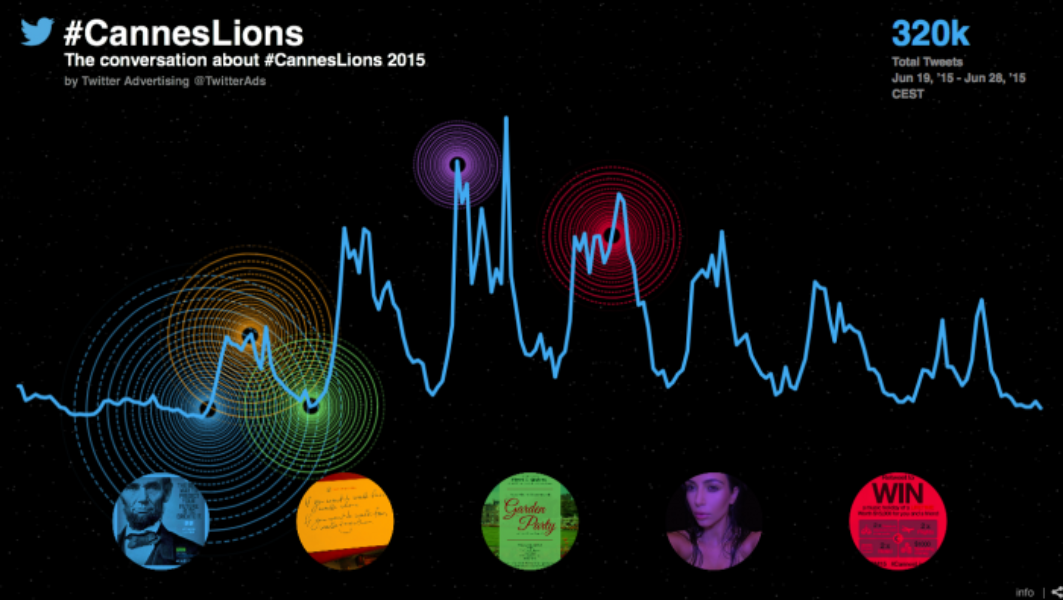 The week began with a surprise appearance. Late Sunday afternoon, Twitter users were delighted to see a regal Twitter emoji rear its head when they Tweeted the #CannesLions hashtag.

As delegates from around the world continued to pour into the seaside city and share their experience on Twitter, it wasn’t long before #CannesLions was trending along with Taylor Swift and the #SummerSolstice.

Ogilvy & Mather (@Ogilvy) helped drive the trend with a regular cadence of inspiring quotes like this one (which was the most popular Tweet of the week, based on number of Retweets):

“The best way to predict your future is to create it.” Abraham Lincoln #OgilvyCannes #Inspire series for #CannesLions pic.twitter.com/mExIiD1GAp

On Monday, Chris Moody, our VP of Data Strategy, took the stage to explain the #PowerOfNow.

Over the next several days, we were inspired by other sessions featuring speakers such as Unilever CMO @keithweed, Sir Martin Sorrell from @WPP and more.

To us, marketing is an investment, not a cost. — Sir Martin Sorrell, @WPP #CannesLions

Twitter users also got a behind-the-scenes glimpse of the Palais action this year thanks to Periscope. @CannesLions used Twitter’s new live streaming app to invite viewers to meet speakers backstage.

LIVE on #Periscope: Chatting with the team behind #thewalkingdead backstage at #CannesLions https://t.co/GkMzjfRmR7

In the evenings, Twitter came alive with video clips from the #CannesLions awards ceremonies via our @SnappyTV technology. One of the most exciting moments was when the first-ever Glass Lion Grand Prix award for gender equality was announced. @ProcterGamble India and BBDO India won for “Touch the Pickle,” a campaign for Whisper sanitary pads.

Along with @LeoBurnett, @ProcterGamble also took home a Glass Lion, the PR Grand Prix and a Gold Lion in the Direct category for an @Always brand campaign encouraging people to use the phrase #LikeAGirl as a form of praise rather than an insult. The hashtag quickly went viral with @GloriaSteinem, @melindagates, @ChelseaClinton and other influencers joining the Twitter conversation.

#LikeAGirl was far from the only honored campaign to feature a significant Twitter component. Here are just a few more winning executions:

Continuing with the theme of female empowerment, @UnderArmour and @droga5 won the Cyber Grand Prix for their “I will what I want” campaign starring Gisele Bündchen (@giseleofficial). When @UnderArmour (a brand previously associated with male athletes) announced its partnership with Gisele, Twitter exploded with comments. To prove that “will beats noise,” @UnderArmour used some of the critical Tweets in a TV ad featuring Gisele working out with a punching bag, and launched a real-time website showing the entire online discussion. According to @UnderArmour, traffic to its website increased 42% – and sales grew 28%.

@ChevyTrucks and @FleishmanHillard won a PR Gold Lion for reacting in the moment. When a General Motors manager stumbled verbally while awarding a Chevy Colorado on TV last fall, @ChevyTrucks quickly Tweeted using the hashtag #TechnologyAndStuff, effectively claiming the conversation. The hashtag became the basis of a successful PR campaign.

@AstraZeneca and @Digitas won the Pharma Grand Prix during Lions Health for “Take it From a Fish,” an integrated campaign designed to educate people about high triglycerides. The Twitter portion of the campaign generated awareness with punny-yet-informative Tweets and images sent from @fromafish.

How @AstraZeneca & @Digitas’ Grand Prix-winning “From a Fish” campaign played out on Twitter. #CannesLions https://t.co/2OFzKWpmfv

@volvocarsglobal, @GreyNewYork and @Click3x won the Direct Grand Prix and a PR Gold Lion for “Interception,” a campaign that took place on Super Bowl Sunday. The brand asked viewers to Tweet the hashtag #VolvoContest during other auto brands’ commercials to nominate loved ones to win a new Volvo XC60. As a result, @volvocarsglobal ensured it was top of mind even when other car brands were on the screen, and trended during the game.

@Wendys, @KetchumPR and @VML earned a Silver Lion for Branded Content and Entertainment for a campaign promoting the Pretzel Bacon Cheeseburger last summer. The team built buzz about the return of the limited-time menu item by transforming users’ Tweets about it into love songs performed by @BoyzIIMen. (Learn more about #PretzelLoveSongs from our Q&A with Brandon Rhoten, vice president of digital and social at Wendy’s.)

@Unilever and @Mindshare won a Silver Lion in the Media category for #SpeakBeautiful. The partners used an algorithm to find Tweets reflecting personal negative body image messages sent by women during Oscar season, and replied to them with supportive Tweets from @Dove suggesting that they instead #SpeakBeautiful. The campaign generated more than 5.9 million Tweets, 400,000 of them mentioning @Dove.

Finally, on Friday night, the coveted Titanium Grand Prix for the breakthrough idea of the year went to @dominos and @cpbgroup for enabling consumers to order pizza by simply Tweeting an emoji. On the first day the option was available, more than 500 people signed up.

Back at the TweetSuite, we celebrated creativity with millennial creators @robbyjayala and @Sayhop and Vine artists @Pinot and @KhoaPhan, all of whom are part of the Niche network. Here are a few examples of the creative work shared by Niche content creators who joined us for the week:

For a few more glimpses of #CannesLions fun, enjoy this video.