Tonight, @NFL teams will be on the clock during Round 1 of the NFL draft, and Twitter is the perfect complement for fans to the live telecasts on ESPN and NFL Network.

To join in on the virtual sports bar conversation on Twitter, use the official hashtag: #NFLDraft.

League and broadcast info
Football fans will want to begin by following the league’s official account, @NFL. And ESPN (@ESPNNFL) and NFL Network (@NFLNetwork) will both broadcast the draft and have a lot planned on Twitter, too.

Some of the best reaction Tweets will appear on air during the live telecast on @NFLNetwork.

Prior to tonight’s draft, there will be a Gold Carpet event. The @NFL will ask fans whether they give thumbs up or thumbs down to the best outfits from the festivities. @NFL will Tweet out Twitter Mirror photos of the outfits. Join the convo with via #NFLFashion.

@ESPNNFL plans to live-Tweet the entire draft. Look out for newsmaking Tweets on-air and custom hashtags for each team as they prepare to make their pick (e.g. #KCpick).

In addition, @ESPNNFL will Tweet out custom images for all Round 1 drafted players and feature behind-the-scenes videos and photos on site in Chicago. Make sure to also follow @ESPN and @SportsCenter for #NFLDraft content.

This @ESPNNFL Twitter list features great follows for NFL draft related news, and also be sure to find and follow local and national NFL beat reporters.

Draft prospects
Top NFL prospects attended the @NFLPA Debut event in Chicago last night and many of them thanked the people who helped them get to where they are via Twitter #NightBeforeDraft video Tweets. This collection below features all of the Tweets:

The players also took portrait photos at the event and those were Tweeted out from @NFLPA:

Twitter mock draft
We ranked which draft-eligible players were most-mentioned in Tweets (from April 21-28, 2015) that discussed each NFL team and the draft. Each team “drafted” the player who appeared most frequently in draft-related Tweets about that team. But just like the regular NFL draft, if a player had already been claimed by one team based on Twitter conversation, we went down the list to find the first player who was still available. Check it out below: 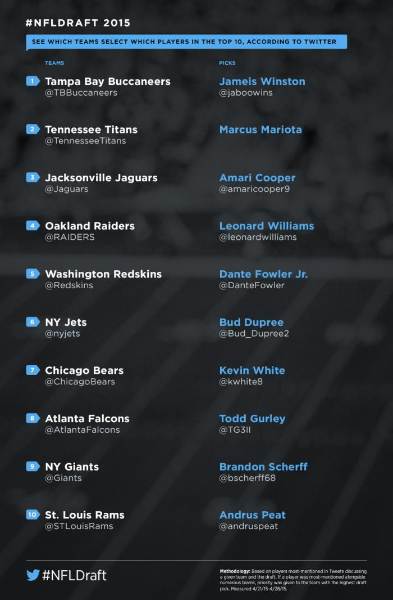 You can find and follow all 30 NFL teams here and current NFL players here.