Influencer Q&A: How @AARP wins the moment on Twitter

This year, members of Generation X will begin to enter their fifties. That’s right, people like Dr. Dre are now prime candidates for @AARP membership and Tammy Gordon (@Tammy), Vice President of @AARP Studios, invests in Twitter as an ideal place to connect with this target audience. Here’s a look at how @AARP won big on Oscar night, why she recently restructured her team and the value of a CEO with her own hashtag. 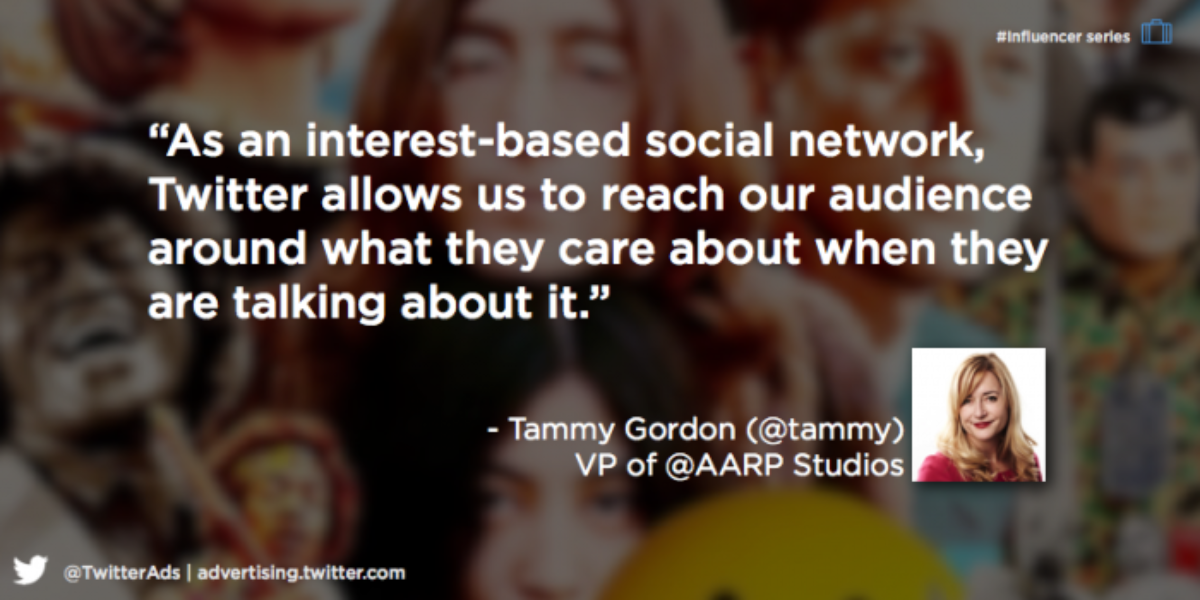 @Tammy: As an interest-based social network, Twitter allows us to reach our audience around what they care about when they are talking about it. For @AARP, that means when something is happening around healthcare or financial security or something is breaking with the media and policymakers, we’re both tracking the conversation and trying to influence the dialogue on Twitter.

It also allows us to chat along with our audience about big live moments like Julianne Moore winning her first Oscar or Dr. Dre turning 50. Those are ideal moments for us to spotlight people what being 50 actually looks and celebrate that.

Congratulations to Julianne Moore on her first #Oscars win at 54 for her devastating performance in Still Alice. pic.twitter.com/NCyMOE1BxK

@Tammy: That’s exactly the reaction we knew people all over Twitter would be having. We plan for real-time moments like that and put some marketing dollars behind that content on Twitter. The platform is a prime way for @AARP to connect with new audiences in the moment when they are most receptive.

This rap icon may be turning 50 today, but he’s still D.R.E. pic.twitter.com/dGVerDD4UA

@TwitterAds: Tell us about your approach at the Oscars this year.

@Tammy: Our Oscars campaign was a huge win from both a paid and organic standpoint. In preparation, we had the team sit down weeks in advance of the Academy Awards and think through our content strategy. We looked at all the ages of the nominees and presenters. We made sure we had their Twitter handles and prepared messaging and graphic content for many of them in advance that we were taking a bet would be part of winnable moment.

So for example, J.K. Simmons is 60 years old, he’s starred in more than 65 films and this was the first time he’s been nominated for an Oscar. Our positioning really played into the whole ethos of @AARP that you can be whatever you want at whatever age.

Oscar winner J.K. Simmons is proof that some of life’s greatest rewards come in your 60s. #Oscars pic.twitter.com/BbCovKWPlr

That messaging was at the heart of everything we did and really woven throughout. We specifically embedded it in the graphics so that whenever the image got shared, our message was prominent.

There was another pre-planned content strategy around Meryl Streep that performed very well. She was obviously nominated and is so iconic that everyone usually talks about her: She typically wins her own moment at the Oscars.

So we had our graphics team create a visual of all the dresses she’s worn for all the Oscars she’s been nominated for over the years. And in real time, we had a graphic artist ready to illustrate the final dress for that night. We had it teed up that day before live coverage even began, engaging people and asking, “What do you think Meryl will wear?”

What do you suppose the Queen of Hollywood might wear on the red carpet for her 19th #Oscars nomination? #MerylStreep pic.twitter.com/CnbZ5X2CV6

We created a list of fashion, entertainment and media writers and bloggers that we targeted so they amplified our message throughout the night. That was so successful because the earned media was not only happening on Twitter but it was being picked up by media outlets across channels.

Having @AARP called one of the most impactful Oscars advertisers by several media outlets when we are having more impact at a lower cost with a very targeted strategy - that’s a win the C-Suite always loves.

@TwitterAds: You recently restructured your team. Tell us why.

@Tammy: Social can only go as far as the great content you have. Our television and radio department was creating content but didn’t really have a distribution channel for it. So we’ve combined the two into what we’re calling AARP Studios.

We have teams of multimedia producers who are working with social strategists to develop what can of content will work with our social audiences, create that content whether it’s graphic or video and distribute across networks including Twitter.

In addition, we added an in-house paid marketing specialist and also an analytics expert along with a community engagement and management firm.

@TwitterAds: Tell us what your team has learned about producing winning creative for Twitter.

@Tammy: For us, what works is really succinct Tweets. We have what we call “the rule of one” here at AARP: one sentence, one message, one graphic, one ask. A really simple message with a link and a great piece of graphic or video content is a formula that really works for us on Twitter.

@Tammy: Our CEO is now our first Tweeting CEO. JoAnn (@JoAnn_Jenkins) has been great with letting us experiment as a team. Since very early in her career at AARP, she’s been very interested in learning about our Twitter community and the etiquette and what goes into a successful Twitter handle.

So as she’s evolved with the organization, she’s really taken Twitter on from a leadership standpoint. She’s using it to talk about the issues she cares about and what’s happening in her day.

Great example of how to #DisruptAging: Age is not a barrier:Tech designer, 91, lands her dream job in Silicon Valley. http://t.co/HlGTnzWF0M

She even has her own hashtag #DisruptAging which she wants to get out there to not only talk about what AARP is doing but mix it up with people.

And on the paid side of things, we found that we increased engagement during the Oscars at much lower cost than year before and I really credit that to the ability to target so much more on the platform. In fact, the new age targeting tools have allowed us to do a much more targeted, say, membership discount that actually connects with people who are in their 50s at the moment when they may be considering an AARP membership.

We’re excited about the potential moving forward of highlighting offers that are further down the funnel and more direct response style campaigns.