This past July, TV Land (@tvland) used Twitter to build buzz for two new comedies: “The Jim Gaffigan Show,” about a standup comedian with five kids living in a two-bedroom apartment in New York, and “Impastor,” about a small-time crook who hides from loan sharks by assuming the identity of a gay pastor. Both shows have been hits, says Kristin Mirek (@krisrolla), vice president of multi-platform marketing at the cable TV network. She attributes much of the tune-in to new Twitter advertising features, including autoplay Promoted Video and the Twitter Audience Platform. 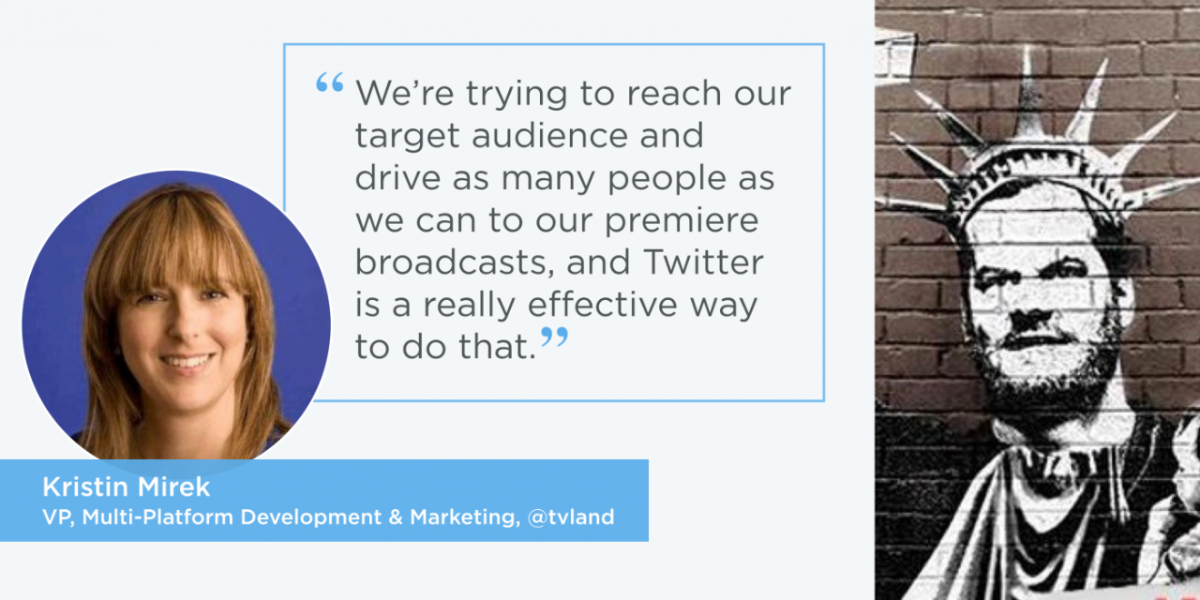 We spoke with Mirek to learn more about how @tvland uses Twitter’s suite of advertising tools to engage its target audience and drive viewership.

@TwitterAds: What are your goals when it comes to marketing @tvland on Twitter?

@krisrolla: Our first and foremost goal is to get people to tune in when we want them to. People are shifting when and how they watch TV — they’re time shifting, device shifting, platform shifting. We’re trying to reach our target audience and drive as many people as we can to our premiere broadcasts, and Twitter is a really effective way to do that.

@TwitterAds: Who is your target audience? How do you find them on Twitter?

@krisrolla: Our target audience is adults age 25-54. To find them on Twitter, we really hone in using interest and @username targeting.

When we have show talent on Twitter, we try to target their followers to make sure they’re aware of the programming. For example, Jim Gaffigan (@JimGaffigan), whose show premiered in July, has over 2.4M followers on Twitter. And Hilary Duff (@HilaryDuff), one of the stars of “Younger,” has nearly 5M followers.

Next, we use Twitter’s lookalike targeting to find people who are similar to their followers, because we know they’re also likely to tune in. We also target followers of competitor shows.

@krisrolla: It’s a range. We do Tweet blasts when we’re premiering a show, we share GIFs, and recently, we’ve been using autoplay video. It’s a fantastic attention-getter, and really breaks through all the activity on Twitter. Having a great playback experience that you don’t need to click to watch is really valuable, especially on a fast-moving newsy platform.

@TwitterAds: When did you start using autoplay video?

@krisrolla: It just happened that autoplay video rolled out at the same time we were launching “The Jim Gaffigan Show” (@gaffiganshow) and “Impastor” (@ImpastorTV). So, we said hey, let’s give it a shot.

We had a spot for “The Jim Gaffigan Show” that was a parody of “The Bachelorette,” so we decided to use Twitter TV conversation targeting to reach people talking about “The Bachelorette” on Monday nights. It was huge — we ran that clip against the show for the next four weeks, and we had more than a 29% engagement rate each week.

We were blown away by the engagement rate, and our average cost-per-view has been as low as $0.03. Since then, my edict to my team has been, “use video on Twitter, it works!”

@TwitterAds: How has autoplay video affected your approach to Twitter?

@krisrolla: It has simplified things for us, because we don’t have to create a whole new creative spec. We can use existing video assets. It’s also opened up opportunities because longer video does better, so we don’t need to keep our clips to just 15 or 20 seconds. People on Twitter will engage with a longer piece of content.

@TwitterAds: Any other autoplay video tips?

@krisrolla: It’s really important to give people a reason to stop and watch. Make the first few seconds as engaging as possible. For example, we did a shot of @JimGaffigan waving his hands and pointing down to the volume button on users’ players, and that got people to stop and engage. You don’t need to be as meta as that, but anything that’s really arresting and captivating in the first three-to-five seconds is the most important thing you can do in this environment.

@TwitterAds: What other Twitter products are working well for you?

@krisrolla: The Twitter Audience Platform. It underscores the pulses we send from Twitter, and lets us capture after-premiere conversation. It’s our always-on strategy, and great for building awareness.

We saw it as a really nice continuity play for both “The Jim Gaffigan Show” and “Impastor” because we could optimize creative and include video. It’s easy for us to activate, and that’s a real boon. And I was really surprised to see our network engagement rates — they’re up to 8%. That was kind of mind-blowing, given the ads appear to people in the app environment. The fact we can get people to stop and click is really impressive.

Image used with permission from @tvland

@krisrolla: We’re looking forward to season two of “Younger” in January 2016, and a show called “Teachers,” which is based on a web series. Stay tuned!